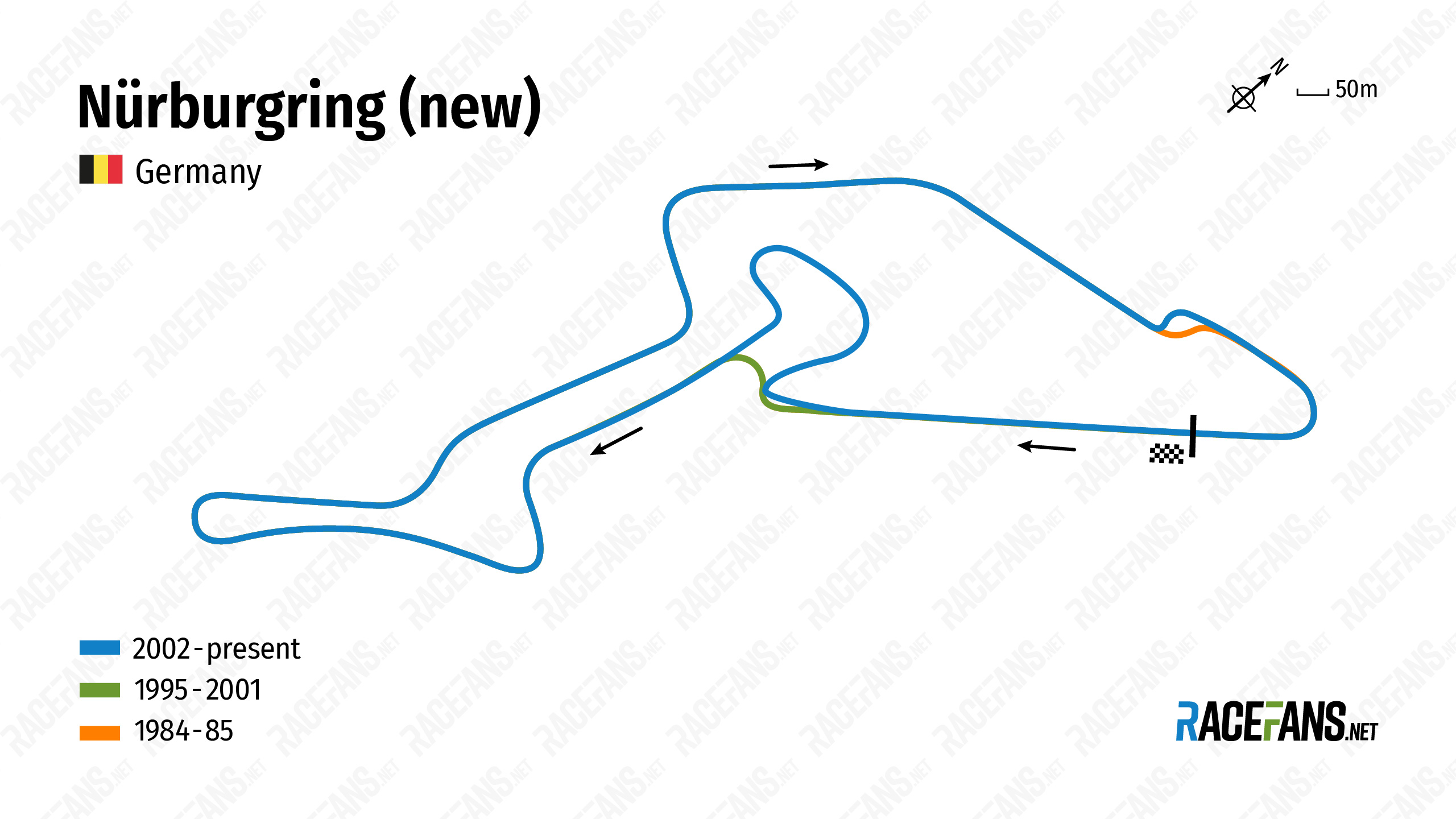 The modern Nürburgring grand prix circuit was constructed in 1984. But the venue itself is steeped in a much longer history as the Nordschleife, dubbed “the Green Hell” by Sir Jackie Stewart.

The historic town of Nürburg was picked as the site of a new race track in 1925. The first layout of the enormous 28-kilometre circuit, called the Nürburgring, opened in 1927. In addition to hosting races it was used as a toll road for regular traffic whenever there was no track action.

By 1929 the layout had been changed, splitting the 174 corners of the original Nürburgring into a Nordschleife and Sudschleife layout, with the Nordschleife being a Grand Prix track and the Sudschleife more for motorcycle racing.

Formula One returned to racing the Nordschleife after World War Two and carried on there until the 1960s, when the speeds of cars began to be too dangerous to use the heavily-forested circuit. By 1970, F1 drivers chose to boycott the race unless significant safety changes were made, following the death of Piers Courage during the race at Zandvoort and the German Grand Prix was moved to the Hockenheimring.

F1 returned to the Nordschleife in 1971. In 1976 Niki Lauda, fearing the track could not be properly marshalled or covered by medical staff across its enormous length, asked the drivers to, again, boycott the race. The race went ahead, and Lauda suffered the very fate he feared. In tricky mixed conditions he crashed at Bergwerk, was trapped in his burning, heavily-fuelled car, and had to be pulled from the wreck by his fellow drivers.

Lauda survived but F1 on the Nordschleife did not. Following Lauda’s accident the track was still used by Formula 2 and for sports car races. Today some GT car and endurance races still use the circuit, which requires drivers to pass an additional license showing they have sufficient experience there to race safely. It is considered one of the most dangerous tracks still raced on, and one of the most impressive tests of any car or driver.

F1 returned to the Nurburgring in 1984, but on a new circuit built adjacent to the Nordschleife. It hosted the 1984 European Grand Prix and 1985 German Grand Prix, and in its first year held a non-championship race featuring an all-star F1 line-up including an array of champions who were beaten by a rising star of the future – Ayrton Senna.

The Nürburgring fell off the Grand Prix calendar but returned in 1995 as the success of Michael Schumacher brought a generation of German fans to the sport. It held a second German round, usually called the European Grand Prix but twice titled the Luxembourg Grand Prix. After 2006, when Schumacher first retired, it and Hockenheim shared Germany’s round of the world championship.

F1 therefore raced at the Nürburgring in alternate seasons. But after 2013 but the race returned to the Hockenheimring, amidst a funding argument that saw Germany left without a grand prix at all in 2015 and 2017. Unexpectedly, the Nürburgring returned to the F1 calendar during the heavily-disrupted 2020 season, holding the Eifel Grand Prix.