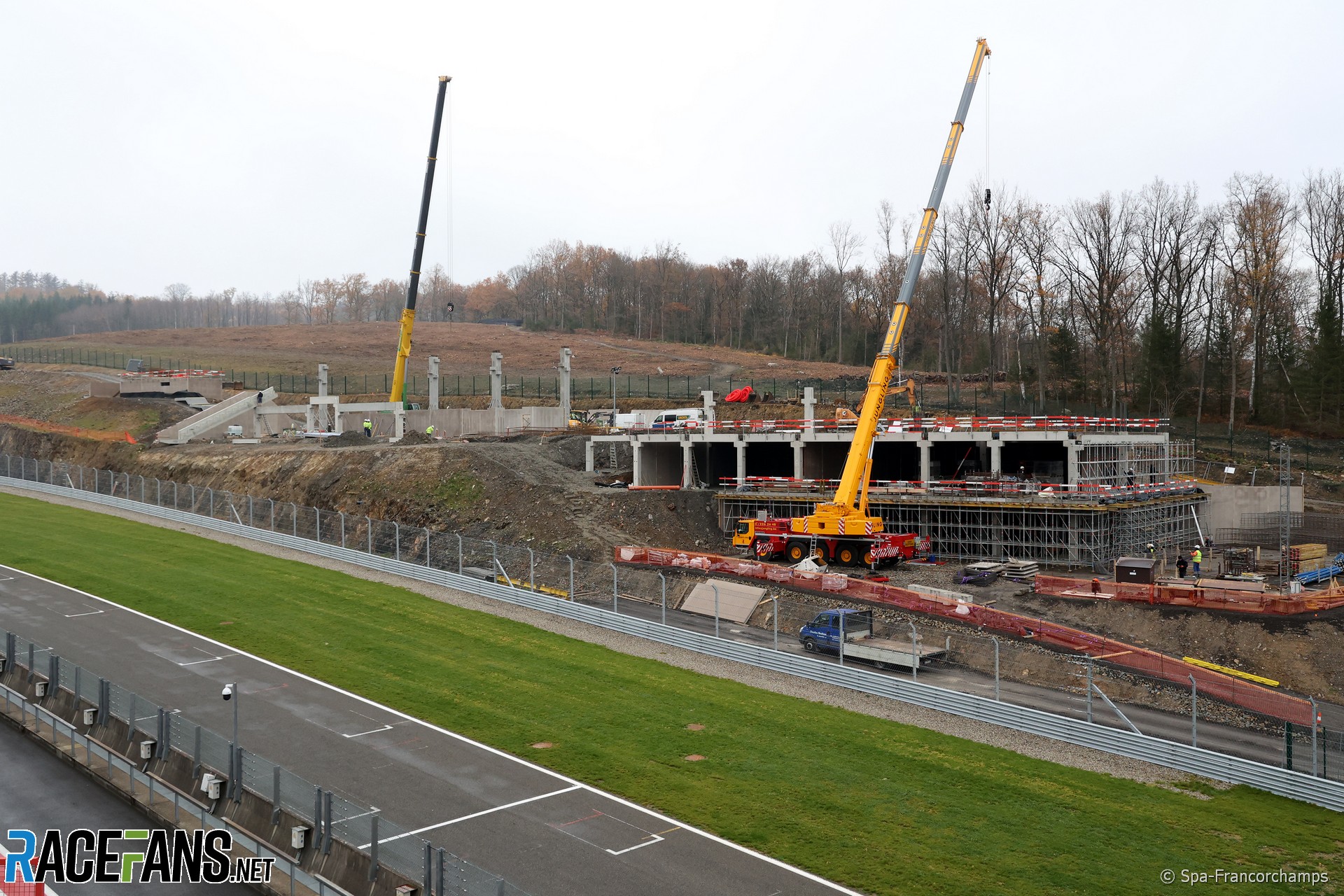 In the round-up: New grandstands overlooking the run down the hill from La Source to Eau Rouge are under construction at the Spa-Francorchamps ahead of next year’s racing calendar.

Spa, which hosts the Belgian Grand Prix, received a major renovation over the last off-season to address safety concerns at some of its most challenging corners and install new grandstands at the top of Raidillon. A new grandstand overlooking the endurance pit lane used for the annual Spa 24 Hours sportscar race is currently being built to add around 7,000 new seats to the circuit.

The Spa event promoters signed a new deal this year ensuring its race will return on the 2023 F1 calendar, but the future of the Belgian Grand Prix beyond next season remains in question.

Haas driver Kevin Magnussen received the Lorenzo Bandini Trophy this weekend after being awarded the prize earlier this year.

The award, first awarded in 1992, is dedicated to the late Formula 1 driver Lorenzo Bandini, who raced with Ferrari and won the 1964 Austrian Grand Prix before he was tragically killed during the 1967 Monaco Grand Prix. The trophy is awarded to a figure within Formula 1 chosen by a committee who has demonstrated notable proficiency during the previous year.

Magnussen’s team principal, Guenther Steiner, received the medal of the Senate of the Italian Republic.

GB3 champion Luke Browning will receive a Formula 1 test with Aston Martin after he was named this year’s BRDC Young Driver of the Year.

Red Bull junior driver Liam Lawson and fellow F2 racer Cem Bolukbasi will both have the opportunity to test a Japanese Super Formula car during this week’s official test at Suzuka.

Lawson, who ran three Friday practice sessions in this year’s Formula 1 championship – two with AlphaTauri and one with Red Bull – will participate in the two day test with Honda team Mugen, while the team Bolukbasi will drive with is yet to be determined.

Lawson finished third in the F2 standings in his second season this year, taking four race wins. Bolukbasi scored no points over the 16 races he started and was replaced at Charouz by Tatiana Calderon for budgetary reasons.

"What I love so much – initially I didn't get it because you're young, but I think the opportunity to work with so many people that are very passionate about what they do. I'm not sure what's next for me, but I'm very excited about it."

"It's a big step and a big opportunity for me, but I'm excited to be doing it. It's about stepping up and having an opportunity to move back into mixed competition. It's a good step up, so there's a lot I can learn. I think, if I can be successful and achieve in Indy Lights, hopefully that will give me opportunities going forward."

"For me, I think that the test was quite good. I think we worked quite well with the team. The target of the test was to adapt to the car because it's quite tricky to drive. You need to have some tricks, but we've not done too badly. Also, I wanted to adapt to the team because I was working with a new team for me. It's really hard to adapt but I think we did well."

"Formula E founding partner Julius Baer has extended its sponsorship of the electric racing car series until the end of 2026. The Swiss wealth management company has been a global partner of the world’s first all-electric motorsport series since its launch in 2014."

"What’s going to be fascinating is as Formula E continues, is to really look at which areas of development on the car are going to be the most relevant and ensuring that we can focus on those together with the manufacturers so we continue and use the series as a platform for technical development that can then feed back into the road car side of things as well."

"We know the surroundings and the people, so there is a certain degree of trust, and therefore this was possible. The intention of Jacques is very clear: it’s a very high target, but the intention is to win Le Mans."

Last night, Sebastian Vettel attended the @autosport awards and accepted The 2022 Lifetime Achievement Award, recognising his incredible #F1 career and his unrivalled impact on our sport both on and off the track. pic.twitter.com/OltkqW8HmA

The @LukeBrown1ng trophy cabinet has had some rather nice additions in the past 24 hours! 🏆 https://t.co/qTcsMxRtHw

With F1 teams actively asking race control whether they need to give back positions gained or retained by running off track, @Keithedin thinks there’s a little too much leeway offered by the current rules…

I don’t think I like this passive approach of letting the teams decide whether to consult with race control or not, because that gives them choice of either yielding the position or just taking the penalty. That means they can choose the least damaging option for themselves, regardless of how it affects the opposition. If they think the position is worth more than five seconds, then they can just pull out the five seconds gap and therefore benefit from the illegal overtake – note Verstappen’s comments at the end of Bahrain 2021 where he wanted to do that rather than yield. And this would be even more applicable on other circuits, especially Monaco where overtaking is as good as impossible so one overtake could make or break your race.

I think they should go back to having race control instruct teams to give back the position, and only resort to time penalties in situations where this isn’t possible.
Keith Campbell (@Keithedin)