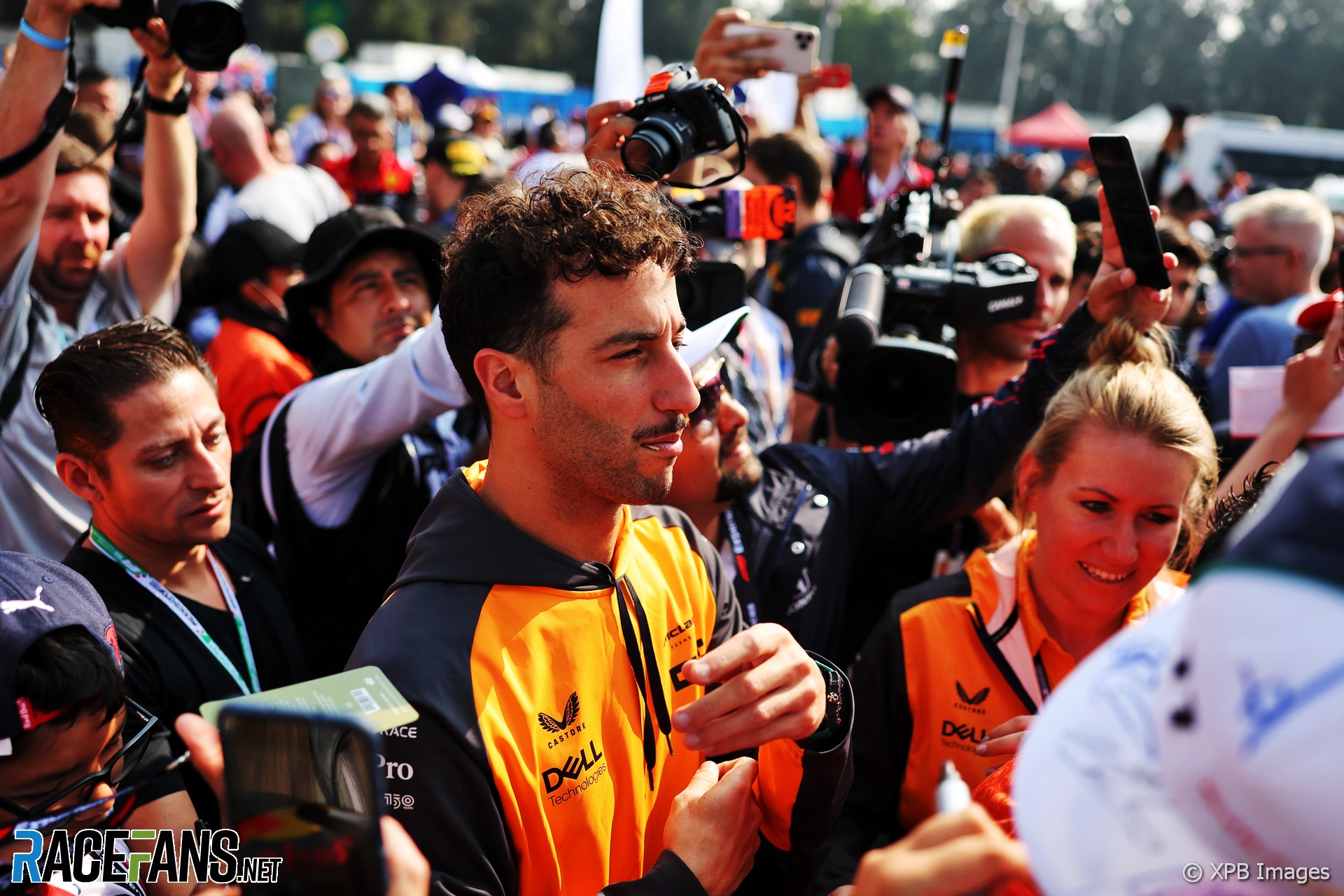 Formula 1’s rocketing popularity in recent years – and the re-opening of races to the public after the pandemic – has seen fans pouring into tracks. Total attendance in Mexico climbed from 371,779 last year to 395,902 last weekend, according to F1.

For the most part fans enthusiastically line up to catch a glimpse of the stars of the paddock and wait patiently for their driver to arrive at the track.

But in recent races people within the paddock have encountered problems sharing a space with some of those fortunate enough to gain access to F1’s inner sanctum. Last weekend in Mexico drivers felt apprehensive about leaving the comfort of the team’s hospitality, one reported being grabbed by a VIP guest on the way to his car before qualifying and extra security was brought in for some.

The sport’s rising popularity is undoubtedly welcome. But is the growing number of people being allowed into the paddock becoming a hindrance to those trying to do their jobs?

Back in the Bernie Ecclestone era, paddock passes were like gold dust. The sport’s previous owner fiercely guarded the sanctity of the paddock, meaning the elusive passes that provided access was very rare. To put it simply, if you didn’t add something to the sport in his eyes, you wouldn’t get in. In Ecclestone’s words F1 was a “five-star Michelin restaurant, not a hamburger joint.”

Liberty Media, who took over from Ecclestone five years ago, have a different approach. Tracks are increasingly packed with Paddock Club and F1 Experiences guests – individuals or companies paying top dollar for fine dining, sometimes hosted by teams, plus paddock tours and sit-down guest appearances in the suites.

This is a significant money-spinner for F1. In Mexico one hospitality package, Champions Club, brought in 600 guests, each paying over $3,000 each. The top-tier package hold far more guests at around 2,700, and is vastly more expensive at over $6,000 per person for the three days.

For the most part paddock guests are welcomed and well-behaved and those in F1 appreciate the attention and the rising popularity of the sport. But in Mexico there were signs of growing tensions.

“This year has got more hectic,” said McLaren’s Daniel Ricciardo.

“I think there are two sides to it. The paddock used to lack atmosphere. I remember eight years ago, 10 years ago, the paddock was actually a pretty dull place.

“So I do like having an atmosphere, I think it should be a fun place to be. But there should also be boundaries. I think it’s a privilege and you also should act with some maturity and respect. That hasn’t always been shown this year. People lose their minds.

“I feel like they should at least have some guidelines like ‘these are the kind of the rules inside the paddock’. I don’t want security [staff], to be honest, I don’t want to be walking in a huddle and just walking through people. I want to be able to have photos and sign.”

Mercedes boss Toto Wolff says he has observed similar changes to Ricciardo over his time in the sport.

“I think for us in a daily routine, it’s more complex to get to the garage, or [we] use scooters, but they jump in front of the scooter. That is an experience that I didn’t get before.

“But we need to be so grateful and humbled that we have such a strong following. I remember times when there was no one interested in the paddock a few years ago, and here we have great enthusiasm and passion and emotion. The downsides are people trying to get a little bit closer than what you would think, [but] I’d take it every day of the week.”

Ricciardo feels a little more common decency needs to be shown at times.

“I think if everyone’s just says, ‘please, thank you,’ and shows a little bit of respect, then we’ll keep obviously giving them that in return.”

“I honestly do catch myself calling people out way too often for not saying please or thank you. They just run up, don’t say a word, do what they have to, and then go. For that, you feel like a little bit, honestly, like ‘used’.

“I think if they set some guidelines, maybe that helps, because there aren’t any at the moment. So if it’s just a bit of awareness, then maybe they’ll be a little cooler. I don’t want to see it change. I just think adults need to act like adults.”

Ricciardo says those who get to come into the paddock should understand not to disturb the drivers immediately before a session begins.

“Certainly the sensitive moments when you’re about to go into the car, I think as well people forget this isn’t an ordinary sport. We’re jumping in cars, we’re going the speeds we go, we require a certain amount of commitment, concentration, and all that sort of stuff. And that’s just the truth.

“So especially the fact that as well, it’s not an ordinary sport, there needs to be some distance before the time we go into the car and compete.“

Other drivers had concerns too. Pierre Gasly discovered his personal bag had been opened on more than one occasion while in the paddock and urged fans to show drivers more respect. While many were anxious not to dampen the crowd’s enthusiasm, they also recognised a need to impose better order in the paddock.

“I love having the fans around me,” said Carlos Sainz Jnr. “I love having everyone around us cheering us, especially I guess because I’m Latin, we have a kind of a special relationship.

“I only ask everyone to stay calm, that we are in a paddock, that they don’t push or don’t shout too much.”

His Ferrari team mate Charles Leclerc echoed his comments: “There are loads of people in the paddock, It’s good because it shows how much more interest there is in F1.

“It’s always been crazy here, but especially this year. Maybe we need to find something [to allow] us to walk a bit easier in the paddock.”

To an extent this may be a symptom of F1’s growing pains and a consequence of the sport’s popularity. But it appears the number of paddock tickets F1 is selling has reached or even exceeded its limit. After all, footballers are able to arrive at the venue without being mobbed and walk down the tunnel to the pitch without fans grabbing them, cricketers much the same, and tennis players also. Should F1 be any different?

The buzzing paddock of the Liberty Media era is clearly preferred, on the whole, to what went before. But the drivers’ need for space, especially when they’re summoning the focus needed to strap into their 350kph projectiles, should be respected.

What was seen in Mexico came close to unacceptable. Ricciardo’s call for “guidelines” should be heeded, as this is not a matter of drivers being precious or seeking to shut fans out. They are there to do a job and deliver results, and they need a bit of calm before the storm.

28 comments on ““People forget this isn’t an ordinary sport”: Why drivers want more peace in the paddock”