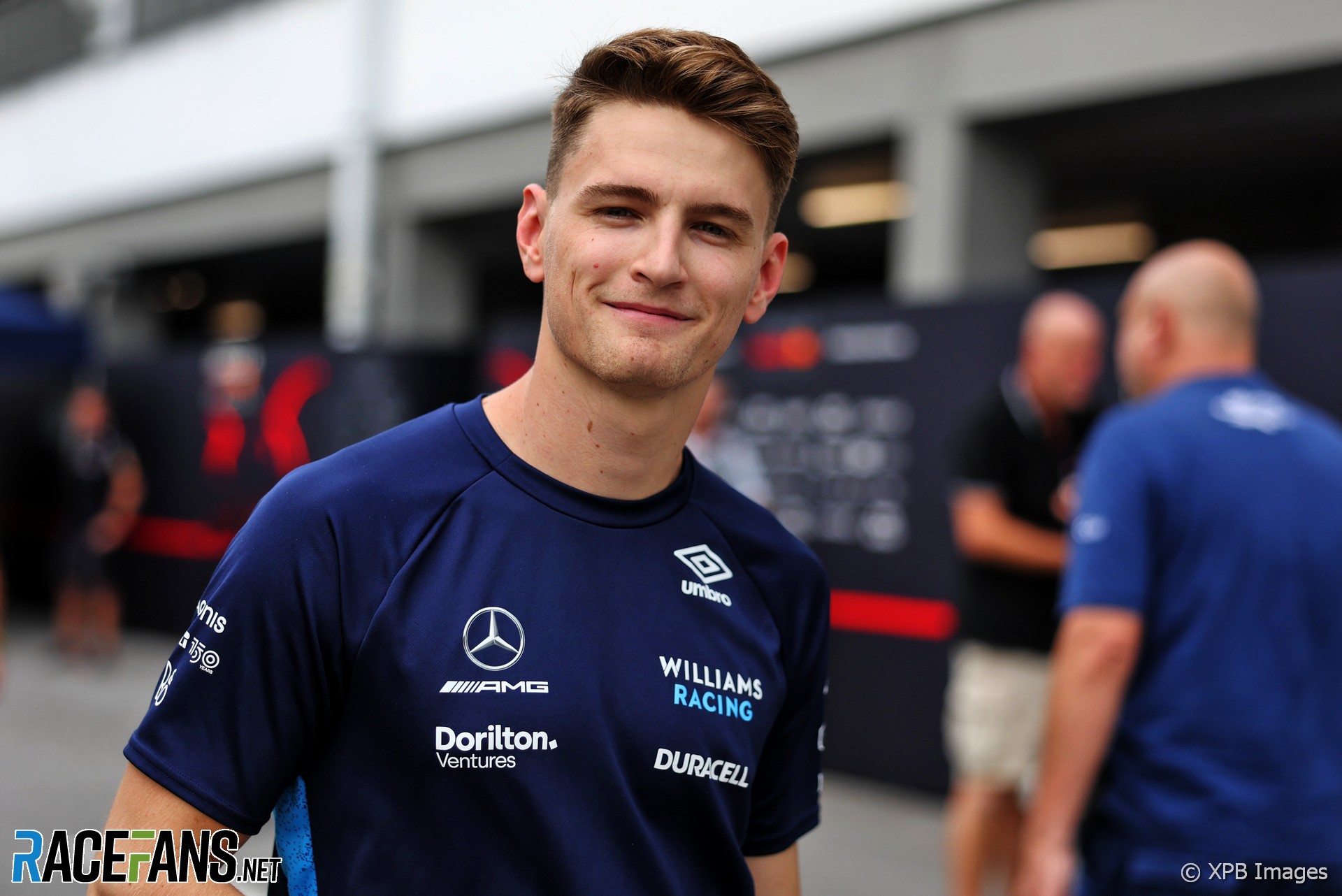 Four Formula 1 teams have chosen to replace one of their standard drivers with a ‘young driver’ for the first practice session at this weekend’s United States Grand Prix.

A new-for-2022 regulation requires all teams to give up two practice sessions across the season to drivers with less than three F1 starts to their name. Both cars must be used for this purpose, rather than the same driver being replaced in both sessions.

Every team bar Alpine has now run a ‘young driver’ in at least one session. They have a driver lined up who will participate in two of the three remaining events after the US GP.

The Circuit of the Americas is an ideal venue to run an unfamiliar driver. It has a lot of run-off, reducing the risk of an inexperienced driver damaging a car.

It is also one of the most important venues for F1 due to the scale of the event it holds and the access to the American market for media coverage and sponsorship that it provides.

There’s been a lot of talk about F1 and IndyCar in recent months. But it has not turned into solid opportunities for drivers in America’s top single-seater series to appear in F1 until now, as last year’s champion Alex Palou will take over the McLaren of Daniel Ricciardo at COTA.

Palou’s route to a practice opportunity has been complicated, as this year he has been involved in a legal battle after attempting to leave Chip Ganassi Racing for McLaren’s IndyCar team for 2023. The outcome of that was Palou remaining with Ganassi for next season, but being free to pursue F1 opportunities with McLaren.

He recently tested at Circuit de Catalunya and the Red Bull Ring in last year’s car and will make his practice debut at COTA. It’s not a track he knows, as it last hosted IndyCar in 2019 before he arrived in the series.

Aside from his four wins in IndyCar, Palou’s single-seater career has also included victories in Euroformula, GP3, Formula V8 3.5 and Super Formula.

Another driver that McLaren are interested in running in practice is 2021 Formula 2 champion Oscar Piastri, who will race for them next year. But Alpine appear unwilling to release him to McLaren before the season is over.

The local fans will know of Palou’s name, both because of his on-track success and of the contractual controversy, but they will also know of Williams’ junior driver Logan Sargeant.

The 21-year-old has become the most likely American to make it into F1 since the FIA rejected Colton Herta’s application for a superlicence earlier this year. Sargeant is currently third in the Formula 2 championship with one round to go.

Sargeant started his car racing career in Formula 4, coming third in the British championship in 2017 and then stepping up to Formula Renault 2.0 where he took fourth in the Eurocup a year later.

Since 2019 he has been racing on F1’s support bill, spending three seasons in Formula 3 and picking up three wins as well as a Macau Grand Prix podium. After coming incredibly close to winning the 2020 title, Sargeant was set to step up to F2 and do testing in IndyCar. But his family’s financial situation changed and he instead was hired by Charouz Racing System for 2021 to help develop their struggling F3 squad.

He made the most of that opportunity, and this year graduated to F2 with Carlin and has won two races and two pole positions already. His position in the championship means he is in contention for a superlicence and therefore a Williams F1 seat in 2023.

Highly rated within Ferrari, Israeli-licensed Russian driver Robert Shwartzman has long been owed a free practice shot by the team that has backed his racing career since 2017.

Shwartzman started testing old Ferrari F1 cars in 2020 to prepare for a practice appearance that never came with Ferrari customer team Alfa Romeo. He did end the year by driving for Ferrari in F1’s official Young Driver Test, and got to do the same a year later while also being called up fellow Ferrari customer Haas to drive.

Before the season began Ferrari said Shwartzman, who had continued to rack up miles in older cars, would do two practice sessions for the team in the final leg of the 2022 season. His COTA showing will be followed up by another appearance at one the final three races. He will replace a different driver in each practice run.

Shwartzman has not raced anything this year, but was F2 runner-up to Piastri, another driver yet to make their F1 practice debut. The 23-year-old won races in Italian F4 in the Formula Renault Eurocup before joining Ferrari, under whose tutelage he was Toyota Racing Series champion, came third in FIA European F3, won the FIA F3 Championship and then won six races across two years in F2.

He has chosen to use the Israeli flag to compete under since the FIA’s ban on Russian national emblems, and the current geopolitical situation surrounding Russia has kept Shwartzman out of F1’s silly season. He hasn’t been linked to the vacancy at Ferrari’s customer team Haas for 2023.

Local fans may be more familiar with his F1 rival Sargeant, but Alfa Romeo’s debutant Theo Pourchaire has a fanbase in Europe that will be closely watching his first run in the team’s C42 car.

Pourchaire won the French F4 Junior title as a car racing in rookie in 2018, and followed it up with the ADAC F4 title in Germany a year later. In 2020 he was runner-up in FIA F3, then stepped straight up to F2 with the struggling HWA Racelab team.

He was unable to show much potential in his two rounds with them, but he has been with a top team in ART Grand Prix since then and followed up two wins as a rookie in 2021 – including an eye-catching success in Monaco aged just 17 – with three wins so far in 2022. Although he missed out on the title, he currently has a comfortable gap to the drivers behind him in the battle for second in the standings.

Since 2019 Pourchaire has been a junior driver of Sauber, the operating company behind Alfa Romeo’s F1 team, and it has been working to prepare him for a future promotion. However he is already out of contention for a berth at the team in 2023, as they set him the target to become F2 champion, and their current line-up of Zhou Guanyu and Valtteri Bottas is being retained.