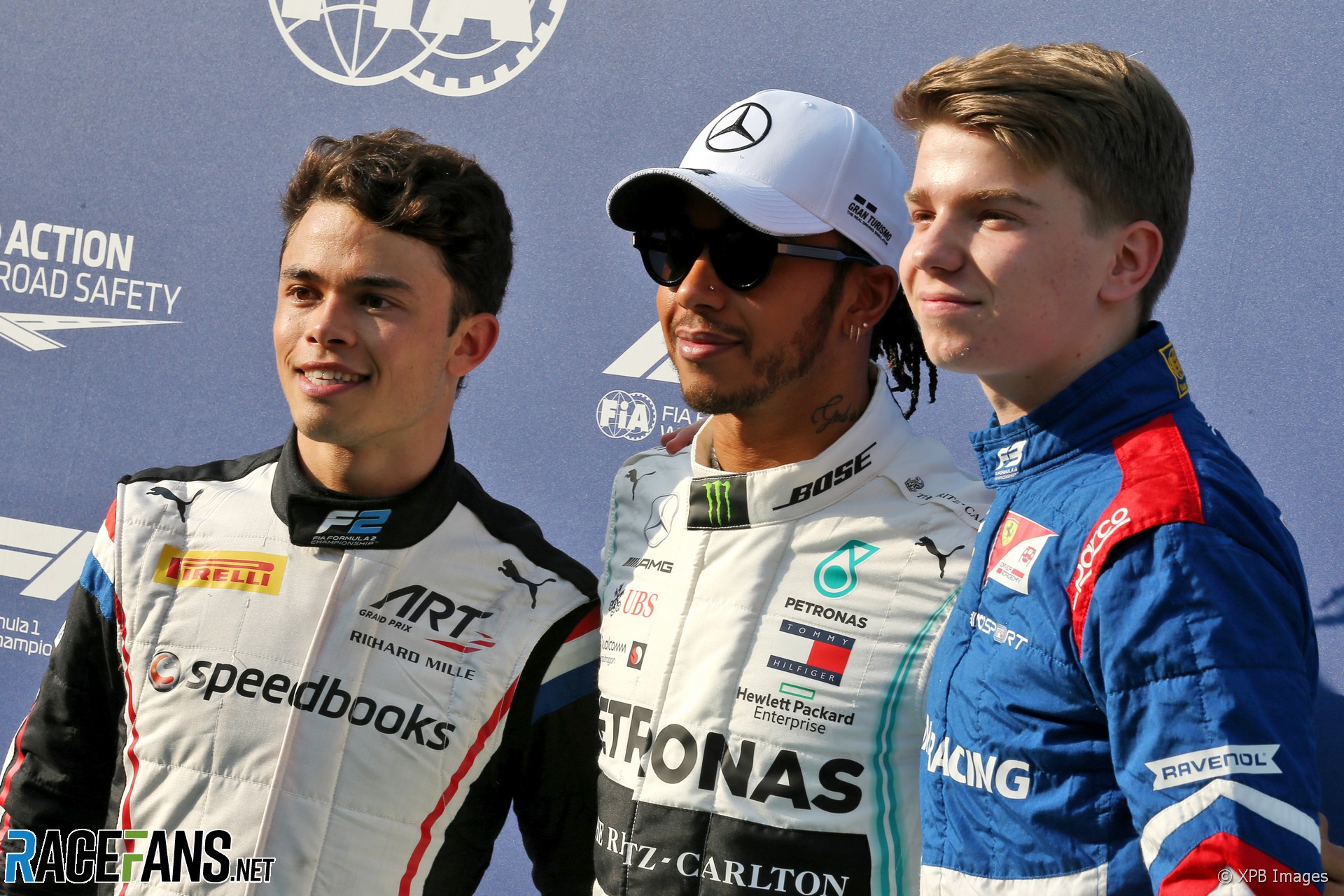 It’s likely there would be no Lewis Hamilton in Formula 1 were it not for McLaren. The support he received from the team during his junior career influenced how driver development programmes operated in the years after.

With Nyck de Vries, McLaren sought to replicate the success they enjoyed with Hamilton. But De Vries will make his debut as a full-time driver with a different team next year, long after parting with McLaren. So what led the team and their promising young talent to part ways?

After taking Hamilton up to F1, McLaren (whose young driver development programme was run jointly with Mercedes) only had Giedo van der Garde on their books in junior single-seaters. He entered the scheme in 2006 at the same time as he joined the crack ASM team in the Formula 3 Euro Series, taking over the seat Hamilton occupied the year before.

That his entry into the programme was connected to his seat drew immediate Hamilton comparisons; the same was true for McLaren’s next signing, Oliver Rowland. The British karter was signed up in May 2007 at the age of 14 – one year older Hamilton was when he joined the team almost a decade earlier. Both had won Super 1 national titles at the junior level the year before.

McLaren were quick the play down the inevitable parallels. “No driver is the next Lewis Hamilton,” they said at the time. “Each driver is individual and we have certainly not brought Oliver into the programme with the aim of him following Lewis’s exact career path.”

Rowland himself added “it is not for me to draw comparisons with Lewis”, and he was right to. Because it was actually another Dutchman, rather than a Brit, that felt the true brunt of being the next ‘chosen one’ after Hamilton.

Ron Dennis, as with every part of McLaren during his time as team principal, was meticulously picky with supporting young drivers and made sure McLaren had a say in almost every detail of Hamilton’s junior career. But by 2009 he had stepped back in charge of McLaren’s F1 team and was succeeded by his right-hand man Martin Whitmarsh. His approach was different, but still heavily influenced by the structures and systems that Dennis had put in place, as well as the success of Hamilton.

In March 2010 – notably during the same week that McLaren bought back 29% of Mercedes’ 40% share in the team – an expanded, eight-member young driver programme was revealed.

Rowland and Van der Garde remained, while four single-seater racers joined and two more long-term prospects from karting were added. One was Alexander Albon, the other Nyck de Vries.

But Albon then landed sponsorship from Red Bull for his karting exploits, so De Vries became effectively the ‘Hamilton’ of the Whitmarsh era: a driver who would be immersed into the team from karting and be directly taken all the way into an F1 race seat by McLaren.

Adding to the similarities, Hamilton’s father Anthony was even recruited as De Vries’ manager following his success in guiding his own son’s career under the direction of McLaren. But that increased control came at the cost of De Vries’ and his father’s ability to make decisions.

De Vries was considered a prodigal talent, winning the World Karting Championship in 2010 and 2011. When he moved up into cars in 2012 – jumping straight into Formula Renault 2.0 just like Hamilton did – McLaren sponsor Lucozade came onboard as his primary backer.

As such a in-demand talent, De Vries could have had his picks of the teams. But McLaren organised tests with three teams and picked the one it had closest relations to based off links to Hamilton’s junior career. The R-ace GP team that De Vries joined in 2012 was connected to ART GP, previously known as ASM and the team that Hamilton had won F3 and GP2 titles with.

Like Hamilton, De Vries finished fifth in the Eurocup as a single-seater rookie. But R-ace was bettered by several teams, including the one de Vries had wanted to join in the first place.

De Vries got his way and was able to move to the more competitive Koiranen GP squad in 2013, but their previous advantage faded as a new car was introduced and De Vries came fifth again. On top of that, McLaren now also had 2012 Eurocup champion Stoffel Vandoorne on their books.

So De Vries had to spend a third season in Formula Renault, and he comfortably won the Eurocup and Alps series in 2014. Although the original plan would have been to move up to F3 for his third year in cars, just like Hamilton did, the double title success was at least an encouraging sign of progress.

But the results on-track masked how De Vries’ position within McLaren was shrinking. De Vries was once such an integral part of McLaren’s team he even appeared in their short-lived animated series Tooned during 2012 alongside its championship-winning due Hamilton and Jenson Button, plus numerous of the team’s legends. But by 2014 McLaren was no longer a race-winning team by 2014 and Dennis had retaken control from Whitmarsh.

After that it was quite simple. McLaren funded De Vries’ career, but sponsors funded McLaren based on return on their investment and McLaren was losing their ability to provide value to sponsors as they slid down the F1 pecking order. Replacing Mercedes with Honda as engine supplier in 2015 guaranteed more funding for the team, but reduced McLaren’s competitiveness even more.

It also prompted changes in its young driver programme. This continued with fresh Honda investment, and Honda juniors, much as the partnership with Mercedes enabled McLaren to support young drivers such as Hamilton in the 2000s.

By the time the Honda deal was struck, Hamilton had already left McLaren to race for Mercedes’ factory team in F1, a move that enabled him to reach record-breaking highs in the world championship.

Once the support of young drivers became a pawn in the internal political game at McLaren, it left De Vries without a direction in the team. When Hamilton was a junior, he was put on F1 straight-line testing duty and given various other work with the team that meant he could reinforce his value to Dennis even if his results dipped (as they did in his first year racing in F3).

Demonstration runs in old cars at events like the Goodwood Festival of Speed was the closest De Vries got to that, although he was a simulator driver too (a role that did not exist in Hamilton’s youth). In over nine years at McLaren he remarkably never drove a contemporary F1 car, and so missed opportunities to impress upon other senior figures in the team how talented he was.

This lack of seat time to help keep his feet under the table became a two-fold issue. While there were a lot of Mercedes juniors when Hamilton was rising up the ranks, he was basically the only talent officially backed by McLaren. Once De Vries got to FR3.5 in 2015, his McLaren stablemate Vandoorne had already established himself in GP2, and – despite being impacted by the same problems De Vries was having within McLaren – was considered to be en route to an F1 seat.

The second part of the problem was another management change. At the end of 2016, Dennis was out again and Zak Brown was in. And he had his own driver he wanted to back.

While Hamilton, Vandoorne and later Lando Norris would be financially supported all the way up to F1, McLaren stopped funding De Vries’ racing after 2016 but kept him on as a junior. This decision undoubtedly added several years on De Vries’s route to F1, and prompted a follow-up decision from the Dutchman that also prolonged his wait to reach the top.

Although McLaren were unwilling to fund De Vries in Formula 2, they wanted him to still do paid simulator work at their Woking headquarters. De Vries, believing on-track results were now more critical than ever to his F1 hopes, made F2 his focus instead.

He had underperformed with ART GP in GP3 in 2016 when dwindling McLaren funding meant he couldn’t move straight across to GP2 from FR3.5, and so when he was dependant on his own budget in 2017 he had no chance of grabbing an F2 seat with the team and making the most of it with a stunning rookie season like Hamilton and Vandoorne had before.

Instead De Vries found a way onto the grid at an underfunded Rapax team, but had to switch to Racing Engineering mid-season and finished seventh in the standings with one sprint race win. At this point his McLaren story was basically over, especially with Brown’s protege Norris arriving in F2 for 2018.

Fellow driver Sean Gelael’s father helped De Vries stay in the series for a second season by making him Gelael’s team mate at back-to-back champion team Prema for 2018, but a troublesome new car introduced that year meant De Vries was alone in leading Prema’s charge and although he came close to being championship runner-up and won three races, he finished behind Norris.

De Vries was noted for his maturity when he entered FR2.0, but it was no standout trait by the time he and his rivals had reached F2, and his media personality was also shaped by McLaren’s rather corporate past approach.

In May 2019 he officially left the team, and just like Hamilton, the freedoms he was afforded by that departure seemed to unlock his character both on and off-track. In a different world, he could well have been the driver to unlock feverish Dutch passion for F1 had Max Verstappen not exploded onto the scene in 2015.

De Vries reunited with ART GP for 2019 and won the Formula 2 championship, with some exemplary performances in the wet and dry and being rapid in qualifying and races. A few days after charging from 17th to third at Monza, De Vries was announced as Mercedes’ first driver for Formula E. In F1’s eyes, De Vries’ high standard that season was devalued by a failure to win the title earlier. No matter how dominant the 2019 campaign was going to be, the ship had already sailed on it turning into an F1 opportunity.

Perhaps it’s no surprise that, like Hamilton, De Vries was then able to become a world champion with Mercedes. His Formula E crown was followed up by an erratic title defence, but his F1 test performances since 2020 and now his starring race debut in the recent Italian Grand Prix has convinced multiple teams of his calibre.

De Vries isn’t the only young driver who has been unfairly hampered by F1 team management changes. Ferrari’s extremely exciting protege Raffaele Marciello suffered a similar fate in 2015 but also ended up fulfilling early career expectations of conquering global motorsport by joining Mercedes. He’s not the first F1 team-affiliated talent to be shuffled backwards by a new arrival – a regularly occurrence for many years over at the Red Bull Junior Team.

But De Vries is probably the best case study for why F1 teams plotting out paths for prodigal talents from a very young age can actually do more harm than good and lead to a longer route to F1 rather than the rapid rise (which it was for its time) of Hamilton and even more extreme examples since. In the end, De Vries did get his F1 chance, and he made it count.

18 comments on “De Vries was once McLaren’s ‘next Hamilton’ – so why did he end up elsewhere?”