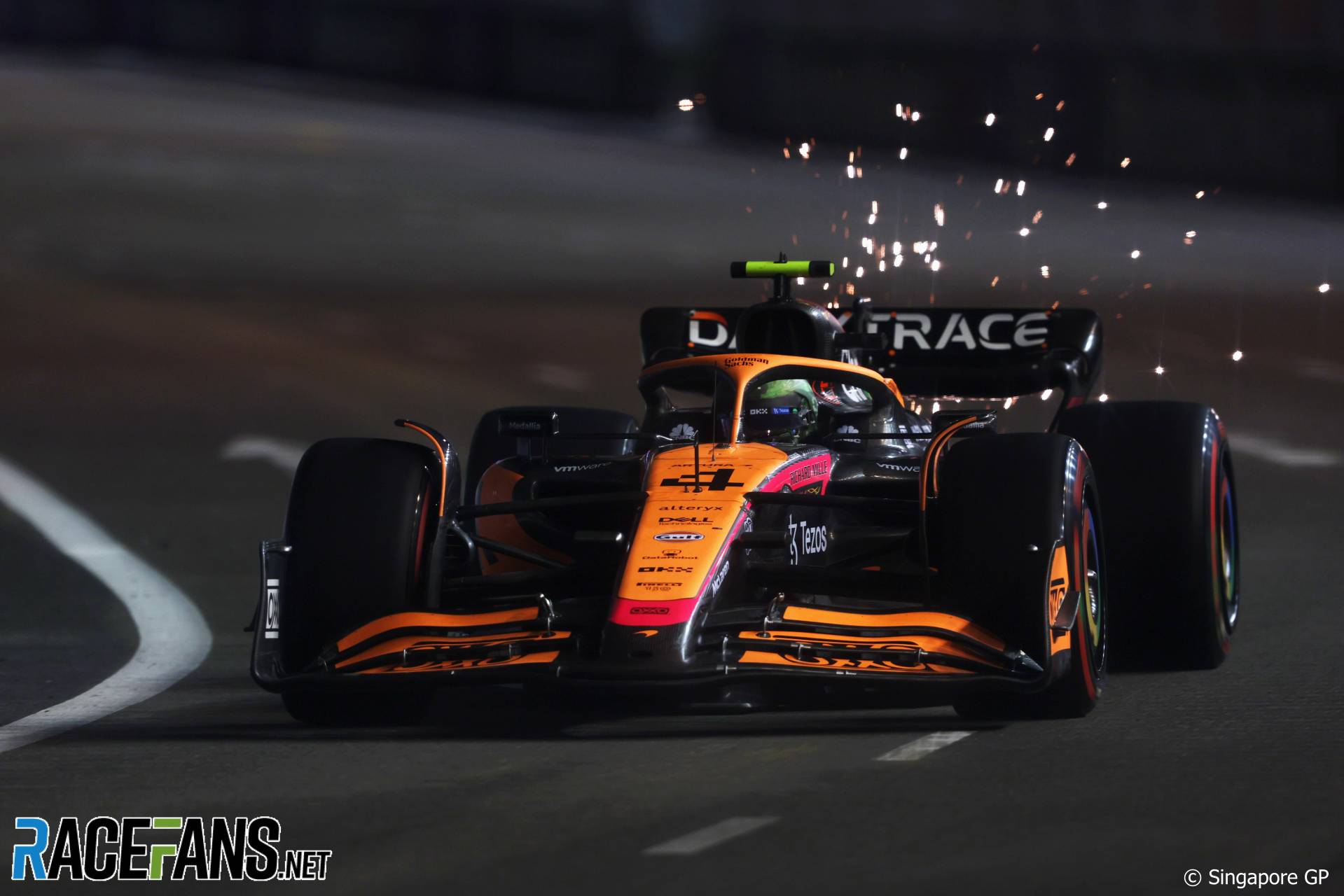 Lando Norris says McLaren gave him instructions to reduce the severity of the bouncing he experienced during the Singapore Grand Prix as they were concerned about exceeding the FIA’s porpoising limit.

While running in fourth place in the final phase of last weekend’s race around the Marina Bay street circuit, Norris’s race engineer Will Joseph directed his driver to start taking a wide line through turn six, the right-hand kink through the DRS zone which leads to the left-hander of turn seven.

Norris said the instructions were prompting by concerns over exceeding the FIA’s Aerodynamic Oscillation Metric – a complex formula to measure vertical G-force applied to drivers due to cars bouncing or bottoming out. It was introduced through a technical directive at the Belgian Grand Prix in August.

“It’s just bumps, Norris told Sky. “It’s a certain amount of how hard you can hit the ground.”

The FIA introduced the metric to detect how severely all cars were porpoising or bouncing on the circuit and act if cars were in breach of this limit. This was done in response to concerns raised about F1’s new ground-effect cars and the impact of aerodynamic porpoising and bottoming out on drivers’ bodies.

“Some laps, I was hitting bigger bumps than others and obviously there’s the rule with how much you’re allowed to bump with the new rules of porpoising and stuff,” Norris explained.

McLaren avoided falling foul of the metric and Norris finished the race in fourth, ahead of team mate Daniel Ricciardo. The result lifted McLaren above Alpine in the constructors’ championship to fourth place, after Fernando Alonso and Esteban Ocon both failed to finish with mechanical problems.

“I’m just happy I got Fernando – that was the main task,” said Noris. “It was not to finish ahead of Max [Verstappen] or whatever, but to be ahead of Fernando. I mean, [the Alpines] both retired in the end, so it probably didn’t make too much difference. But those kind of things are what we need right now.”

Heading into the Japanese Grand Prix in Suzuka, Norris says he is looking forward to racing around the circuit he has only driven once in his F1 career back in his debut season of 2019.

“I think the best thing here is just the flow to the circuit,” Norris said.

“You’ve got to have a good variance of corners – high-speed, low-speed, some very tight chicanes like the last chicane, the tight hairpin in the middle. But the rest of it is just you have one corner and you go straight into another. It’s not like you have kind of one corner – straight – another corner – straight. It’s just you come out of one and you’re preparing straight away for the next one. As soon as you kind of get one part a little bit wrong, it generally continues into the next one.

“It’s just, especially in a Formula 1 car, incredibly fast, incredibly enjoyable. Just a lot of fun – not a lot of run-off, gravel in most places, so you get punished for making mistakes. That’s sometimes not always what we like, but generally as a driver is what you want.”