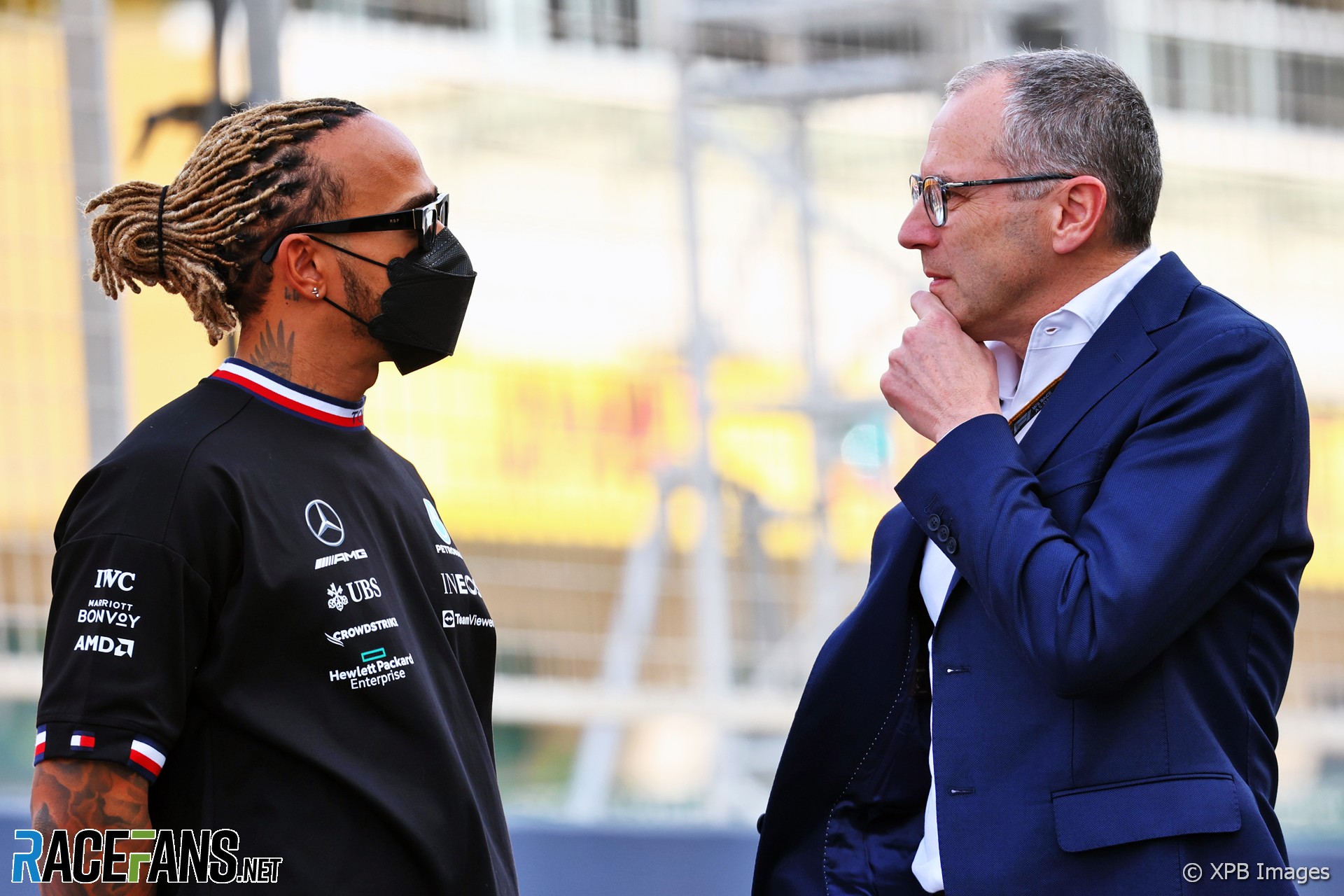 If the 2022 Formula 1 season ended today, Lewis Hamilton’s sixth place in the drivers’ championship would be his worst of his 16-year career.

With six races remaining, that could change: Even second place in the standings is not out of reach. There are many more chances for the Mercedes driver to score points and for his rivals ahead to throw them away.

But by almost every metric, this has been the most challenging and least rewarding season in Hamilton’s illustrious career. It has seen arguably two of his worst race weekends in a Formula 1 car – in Jeddah and Imola, where he finished tenth and 13th respectively while team mate George Russell took fifth and fourth.

However, the Mercedes driver’s lowest moment may have come at the Belgian Grand Prix, where accidental opening lap with Fernando Alonso had ended his race and trashed a young power unit in the process. Speaking to select media including RaceFans four days after that setback, the fusion of frustration, guilt and determination the accident had sparked within Hamilton was evident.

“These past few days have not been easy and I don’t take lightly mistakes that I make,” he said in the Zandvoort paddock. “And some people will be like, ‘well, don’t be so hard on yourself,’ but that’s how I’ve got to be the driver I am today.

“There’s so many implications of a mistake like, for example, the one I just made. The team, the damage, the points for the team, the morale. So I go back into the factory and I’m like, ‘I’m so sorry’. But we win and we lose as a team and we pull back together and that’s the part I really do love.”

But support for Hamilton comes from far beyond just his team. As a driver, he receives plenty of encouragement from his close friends and family, as well as wide international support from millions of fans across the world. Hamilton says he remains acutely aware of it while at the track.

“I’m not alone in the emotional rollercoaster ride,” he says. “I feel bad for my friends that came to [Spa] and sat there ready to go, even if they’re one of a couple in a big orange field of Max [Verstappen] fans.

“I’m so proud of them for the bravery they have, especially with what’s been going on this year, it’s not easy to stand in a crowd of the opponent’s fans. But they have been amazing, and so I know I’ve got to get back up for them as well. So that’s what I’m trying to.”

In trying to help bring Mercedes back to the front, Hamilton and Russell have spent half a season punishing their bodies and enduring multiple disappointments as they puzzle over the riddles thrown up the W13. So the recent August summer break was welcome relief for Hamilton.

Rather than rest at home, Hamilton opted to explore Africa. As the most vocal advocate of F1 returning to the only inhabited continent which does not host a round of the world champion, getting the chance to explore Africa in all its vast diversity appears to have been just what Hamilton needed after arguably the most challenging half-year of his F1 career.

“It just feels like we generally in life take things for granted because they’re there,” he says. “But it just puts a lot of things into perspective.

“Seeing animals in their natural habitat was… ‘wow’. When we were in Tanzania, I felt like I was in The Lion King. After the mid-part of the day, I’ll be working out in the gym and a zebra is just outside or elephants just outside or you come out of the gym and walk to your room and there’s elephants like 50 metres away and you’re like ‘woah’.

“Africa has wealthy cities as well and great businesses, but I really wanted to kind of get to the core of the continent. I’ve seen some of that stuff in the past. I’ve been to South Africa before, I went on a safari when I came down to see Nelson Mandela with my family. But I’m a different part of my life [now].

“I was able to appreciate it so much more and I’ve just found it really grounding, very centring. And it was fun. Me and my friends had fun – a lot of laughter, to the point where you’re getting a stitch, which sometimes when you’re working, you don’t get that. So it was just good to have that.”

Hamilton’s influence extends beyond his status as a world-class athlete and record-breaking racing driver. Aside from the millions of followers and wealth of celebrity names in his contact list, he has the ear of Formula 1 CEO Stefano Domenicali – and a race in the country is at the top of Hamilton’s agenda.

“We are on all the other continents, so why not?,” Hamilton asks. “We go to a lot of these places to highlight those countries and those communities there, so there was no reason why not to do that in Africa.”

South Africa may not feature on the 2023 F1 calendar released earlier this week, but a 2024 race is believed to be on the cards.

“I’ve been working as hard as I can with Stefano in the background to try and get that happening,” says Hamilton. “It’s also a dream for me to have that before I stop racing – to have a race in Africa would be would be incredible.

“But also my time there, just getting to see kids in the streets, it kind of highlights there’s lots can be done for the young kids in the communities that don’t have the same opportunities we have, whether it’s clothes, there’s lots of great organisations. So I’m now looking into that to see how I can get more involved.”

Hamilton is perhaps the highest-profile driver to speak out for where he feels F1 and wider motorsport can and should be doing better, but he’s certainly not been alone in recent years. His former rival and good friend Sebastian Vettel has also developed a deep and powerful sense of social justice and has been increasingly unafraid to express himself using his status as a driver and a multiple world champion.

But Hamilton will lose that accompanying voice when Vettel retires from Formula 1 at the end of the season. Hamilton is quick to express his heartfelt appreciation and respect for his peer and his friend.

“With Seb, we’ve had some great races in the past and I’m so proud of him,” Hamilton beams.

This mutual respect was harder to come by when the pair were fighting over championships in 2017 and 2018, Hamilton admits. “It’s hard to be friends when you’re having a head-to-head battle and one of you is and one of you isn’t winning. The psychological warfare you go through… it’s tough.

“But to be able to come out from that and be such good friends and I think will continue to grow and be even better friends in future, I’m really grateful for.”

With the world championship calendar expanding and evolving to gain new footholds across the world on an almost yearly basis, Hamilton continues to face criticism about his support for diversity and equality as F1 spreads to new nations where women and LGBTQ communities do not enjoy the same rights as those in the west. Hamilton admits, it’s a difficult position to be in.

“I try not to worry about that because again, that’s kind of out of my control,” he says.

“You end up being in sometimes the uncomfortable position of having to speak out on things or being questioned about it. It’s definitely not easy. I just try to understand a little bit of as much as I can about the place that I am going. The fact is, you can’t change the world in a short space of time. So just trying to be understanding of where people are in different cultures and religions and all that sort of thing.”

Eventually, Hamilton’s voice among his fellow drivers will also be lost when he calls time on his own career, leaving behind a younger generation to whom many fans will expect to continue the progressive push that Vettel and Hamilton have been at the forefront of. Does he worry, RaceFans asks, that the positive legacy he’s fighting to leave behind could be lost with his departure?

“It’s not easy for the youngsters that are coming through,” he reflects. “I just think at some stage in their lives, they will hopefully get to that point. But I wasn’t there when I was in my twenties and I think that’s just part of the journey,

“I do hope at some stage we have more youngsters speaking out in the future because this is about accountability, about the people that lead our industry, our teams. We’ve got to keep them on doing the right thing and for the right reasons.”

But even once he’s raced his last grand prix and completed his final lap, Lewis Hamilton is adamant that his influence in the sport will continue – especially as far as Stefano Domenicali is concerned.

“I will still be always, even if I’m not racing,” he insists. “Maybe from a distance, I’m always going to be a fan of this sport.

Become a RaceFans Supporter today and browse the site ad-free. Sign up or find out more via the links below:

35 comments on “‘I’ll always be that thorn in Domenicali’s side’: Hamilton isn’t done with F1, on or off-track”