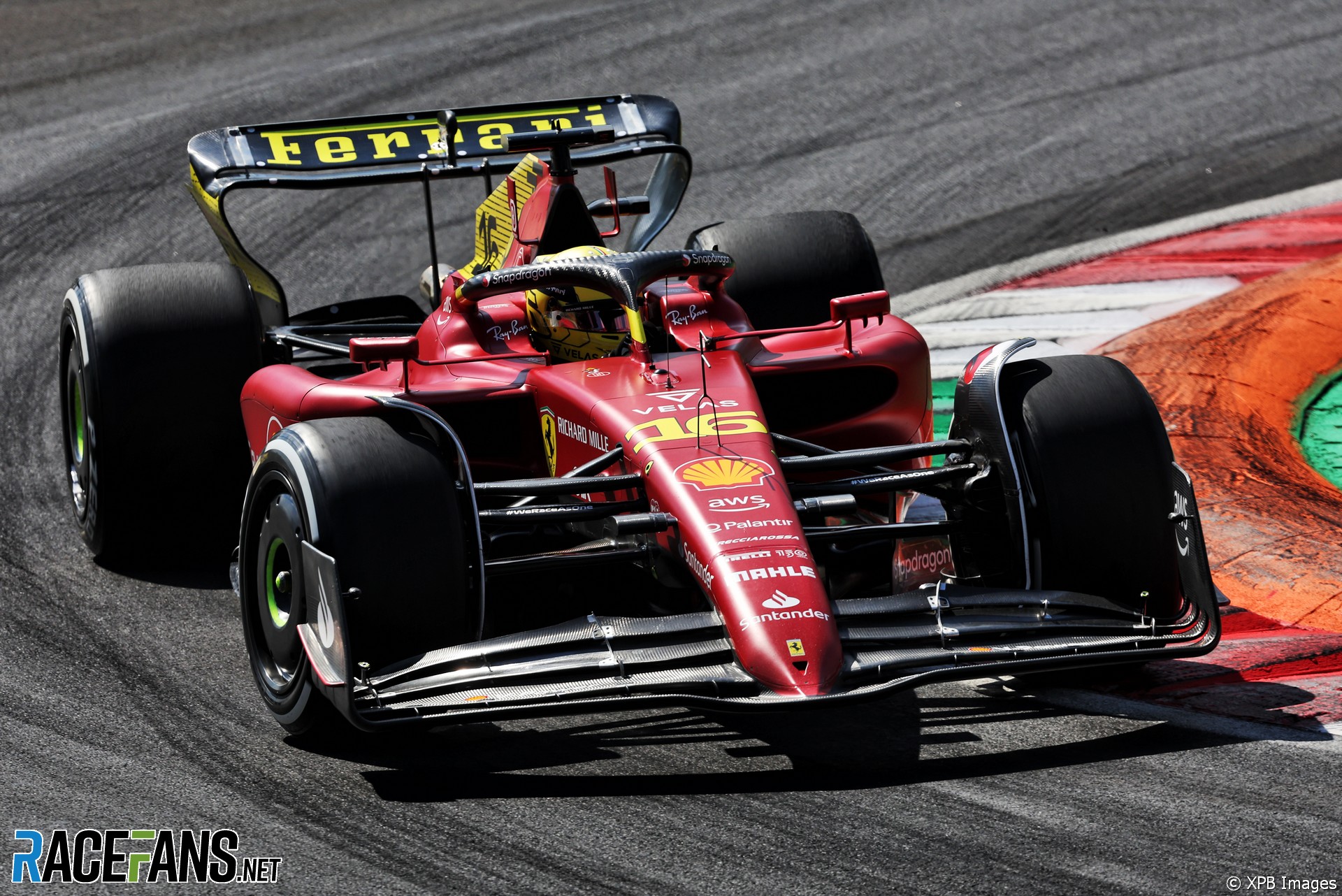 Just 0.077s separated the Ferraris at the top of the times, who were two-tenths of a second quicker than the Mercedes of George Russell and Lewis Hamilton. Max Verstappen was fifth-fastest in the Red Bull.

Despite forecasts indicating a risk of rain, there were clear skies when the session began with air temperature in the mid 20Cs. For this opening session of the weekend, two drivers stepped in as guests for the opening hour. Nyck de Vries made his third Friday appearance of the season for as many teams, stepping into Sebastian Vettel’s Aston Martin, while Ferrari reserve and former Alfa Romeo driver Antonio Giovinazzi returned to the paddock to step into Mick Schumacher’s Haas.

After missing Thursday’s media commitments on the advice of doctors, Pierre Gasly was cleared for action for AlphaTauri. He was called into the pits during his opening run due to an undisclosed problem with his car, but would later return to the circuit.

Red Bull’s periodic DRS problems recurred during the session. Sergio Perez’s DRS began flapping when he deployed it on the 330km/h main straight on the run to the Rettifilo chicane. However, he was able to continue on his run without interruption.

After the first 20 minutes of running, the track fell silent as teams pitted to collect data and change settings. Verstappen sat atop the times with a 1’22.853, before Leclerc beat that time on the soft tyres by almost half a second just before the halfway point in the session. Alexander Albon demonstrated Williams’ low-downforce performance by jumping to third fastest, albeit over a second slower than Leclerc.

Verstappen tried to beat the Ferrari’s time, but was frustrated when he caught Lando Norris at Alboreto (Parabolica) before starting his lap, the McLaren driver refusing to give up track position to the Red Bull. Sainz headed back out on track after Ferrari changed his entire floor on his car to move to second place, less than a tenth behind his team mate.

The two Mercedes moved of Russell and Hamilton moved into third and fourth places respectively on soft tyres, despite Russell complaining about poor braking performance of his car as he wrestled it to a stop at Rettifilo. In the final minutes, Russell also had a scare at the Roggia chicane, when he almost hit the rear of Sainz’s car as he exited the corner to pass the Ferrari driver who had backed off.

De Vries had a brief trip across the gravel at Ascari after locking up into the high speed chicane. Soon after, Sainz followed the Aston Martin stand-in by making a near-identical error, putting his new floor under an impromptu stress test.

There were no time improvements at the front of the field in the final phase of the session, leaving Leclerc as the fastest overall at the chequered flag, just ahead of Ferrari team mate Sainz. The two Mercedes of Russell and Hamilton ended the session in third and fourth, with Verstappen fifth in the Red Bull.

Esteban Ocon and Fernando Alonso completed the opening session in sixth and seventh plaecs for Alpine, with Yuki Tsunoda in eighth and Daniel Ricciardo and Alexander Albon completing the top ten. Giovinazzi and De Vries ended their sessions down in 18th and 19th, respectively.