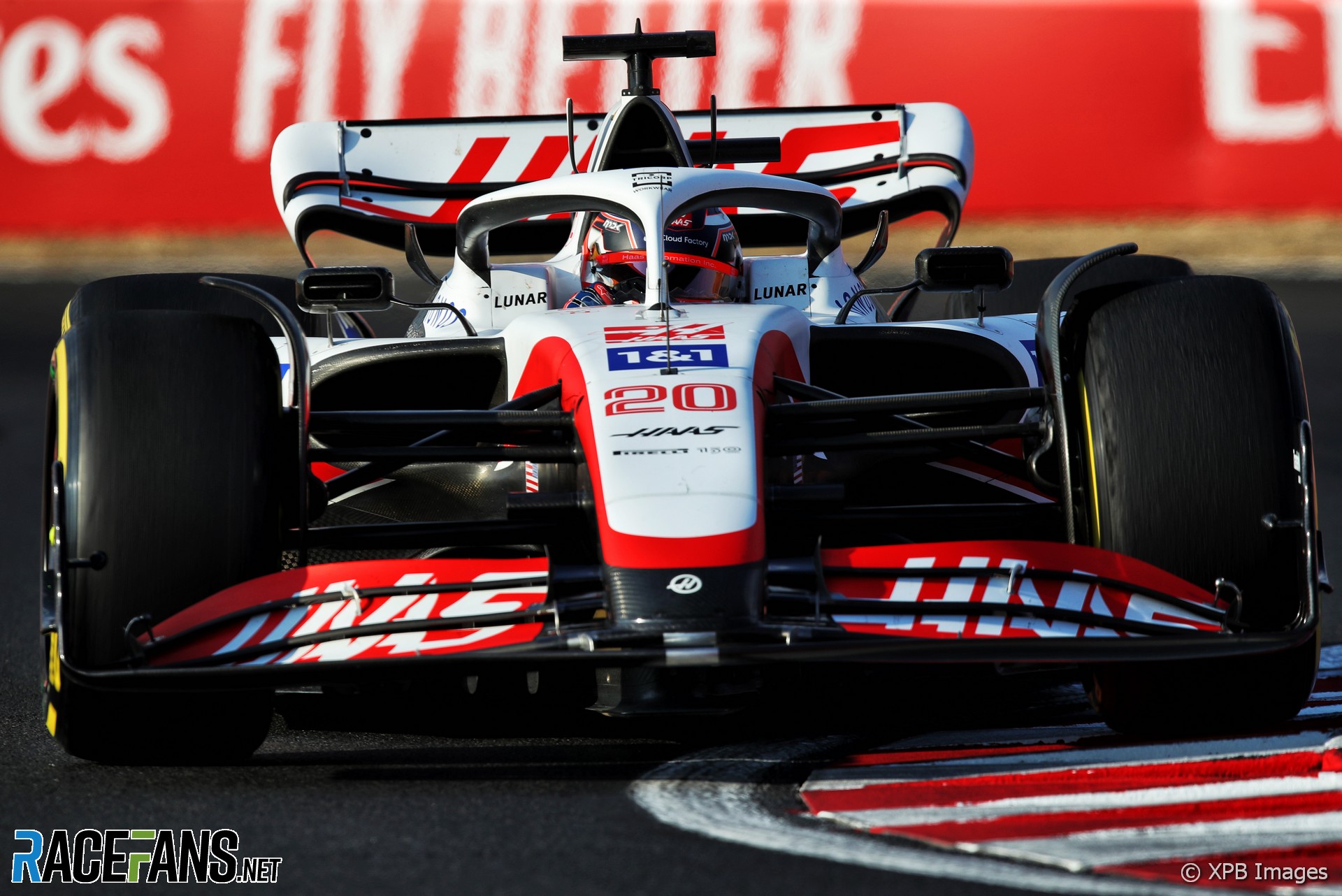 In the round-up: Kevin Magnussen says he is confident that Haas will be able to get more performance out of their upgrade package after the summer break

Kevin Magnussen says he is confident that Haas will be able to get more performance out of their upgrade package after the summer break.

Magnussen was the only Haas drive to benefit from the team’s first major upgrades of the season at the last race before the break in Hungary. He qualified 13th, two places ahead of team mate Mick Schumacher, before finishing the race in 16th after lap one contact led to him receiving a black-and-orange flag, which compromised his race.

“It’s probably going to get better,” said Magnussen in response to a question from RaceFans.

“We will extract more out of this and get it dialled in so that the balance is nice and also get more downforce out of it. But it was a positive weekend in terms of putting the car on track and actually measuring the data that we wanted to see.”

Newly-crowned Formula E world champion Stoffel Vandoorne says his ability to recover from setbacks in races was the key to him taking the title this season.

Vandoorne and his Mercedes EQ team clinched both championships in the final race in Seoul yesterday. He scored points in every EPrix except for Mexico City and took a single race victory in Monaco.

“I think I’ve been very consistent since [Monaco],” said Vandoorne. “Always qualifying at the front.

“But even on the days where it was more difficult, that’s where I managed to recover. And I think those were the key moments. I think if there’s one race that jumps in my mind, there’s Berlin race one. I dropped back to like P12-13 on lap one and a few laps from the end I was still fighting for the victory. So those moments, they made the championship.”

With Mercedes EQ transitioning to McLaren Electric Racing next season, Vandoorne says he will return to the Formula E grid for the first season with the new Gen3 car.

“I’ll be back next year. I need a bit of a reset after this. Gen2 is coming to to an end we’re going into a new era next season, so that’ll bring a full reset. I’m just going to enjoy this this moment for a little bit and I’ll turn up strong again next year.”

Irish driver Alex Dunne extended his lead in the British F4 championship by taking two wins out of three in the seventh round at Snetterton.

The 16-year-old claimed a win in the first and third races of the weekend to further extend his championship lead with three race weekends remaining. Dunne is now 66 points ahead of Williams academy driver Oliver Gray and 127 points ahead of third-placed McLaren junior Ugo Ugochukwu.

Gray claimed two podiums with a third in race one and a second in race two, while Ugochukwu took one podium from the weekend with a second place in race two behind winner Joseph Loake.

To be going back to Brackley, Brixworth and Stuttgart with back-to-back titles is sensational, especially with this being our last year in @FIAFormulaE.

Many thanks to the entire team for the hard work and passion they have shown throughout the years. #WeDriveTheCity pic.twitter.com/22dP9782YW

Time to test your circuit knowledge 🌎

Can you tell us where these four pictures were taken?#HaasF1 pic.twitter.com/grRzML0P0y

Thanks to @MahindraRacing. Congratulations to @svandoorne on a deserved title.

Nearly pulled off a points finish today but not to be. Sums up FE for me…thrills, spills, misadventure and a tonne of effort in one of the most challenging championships around. pic.twitter.com/ZkUq4y152K

I do not have any announcements to make. Im on vacation. Lol pic.twitter.com/Yvp4bD2GWA

Without you we couldn’t go racing 🧡#BARC pic.twitter.com/D0iGzrCp3V

"Today, a special portrait by Ferrari’s Head of Design, Flavio Manzoni commemorates the anniversary of the passing of Enzo Ferrari, capturing those magnificent early days of racing bravery and ambition."

Red Bull are offering a competition for Japanese fans to design his helmet for his first ever home grand prix in Suzuka in October.

"(Drive to Survive) is athletes in high performance machines. It’s about life and death, and on top of that we added Keeping Up With The Kardashians. The problem is they will always position you as you wish, so whatever you say, they will try to make you look careless or try to make you. Whatever suits the story of the series. So I really, I’ve never liked it. I prefer to do face-to-face interviews with anyone who wants to know me."

What is 'Chasing the Dream?' (Formula 2)

"Focusing on the drivers of Formula 2, fans can see behind the curtains into the work that goes into being a racing driver on the cusp of F1, how they handle successes and fight back after failures. With its fly-on-the-wall format, Chasing the Dream shadows the drivers, teams, support, families and the stories as they culminate in dreams coming true or sometimes fading out of sight."

F1 22 has the WORST Battle Pass in Gaming! (OverTake.gg via YouTube)

"Battle Passes in online games are nothing new - that's why F1 has also introduced their own Battle Pass since last year - the Podium Pass. But how good is it compared to other games? Marvin took a closer look at it and - small spoiler - his feedback is not too good." 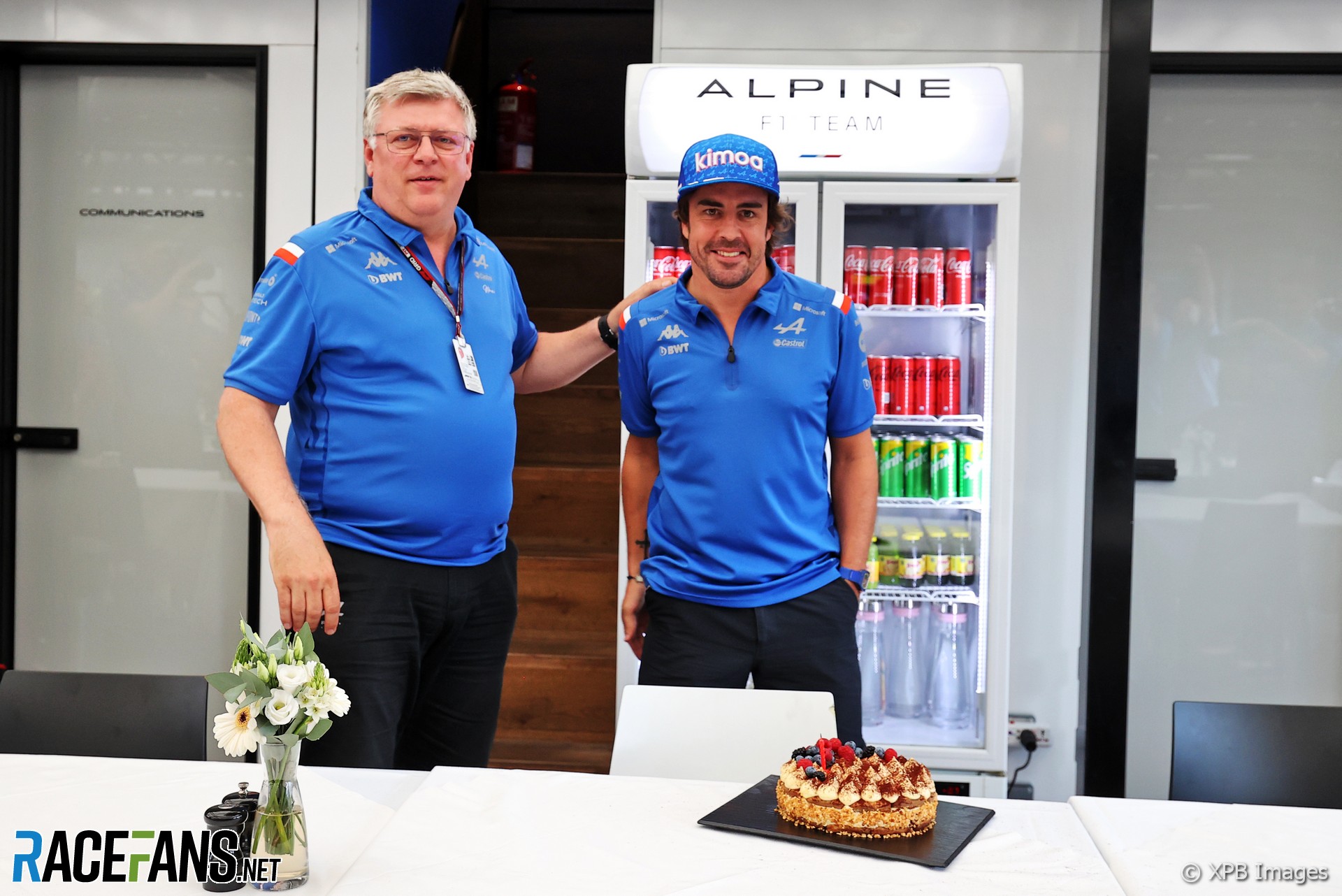 Two hours later, Fernando took to Twitter to clarify that in fact it was not his birthday and that he would not be celebrating his birthday with Alpine in 2023.
Tommy C

Thanks to everyone who came up with caption idea this week and a special mention to Cyberaxiom, JungleMartin, Richard Hill and Electroball76 who all came up with particularly good captions.