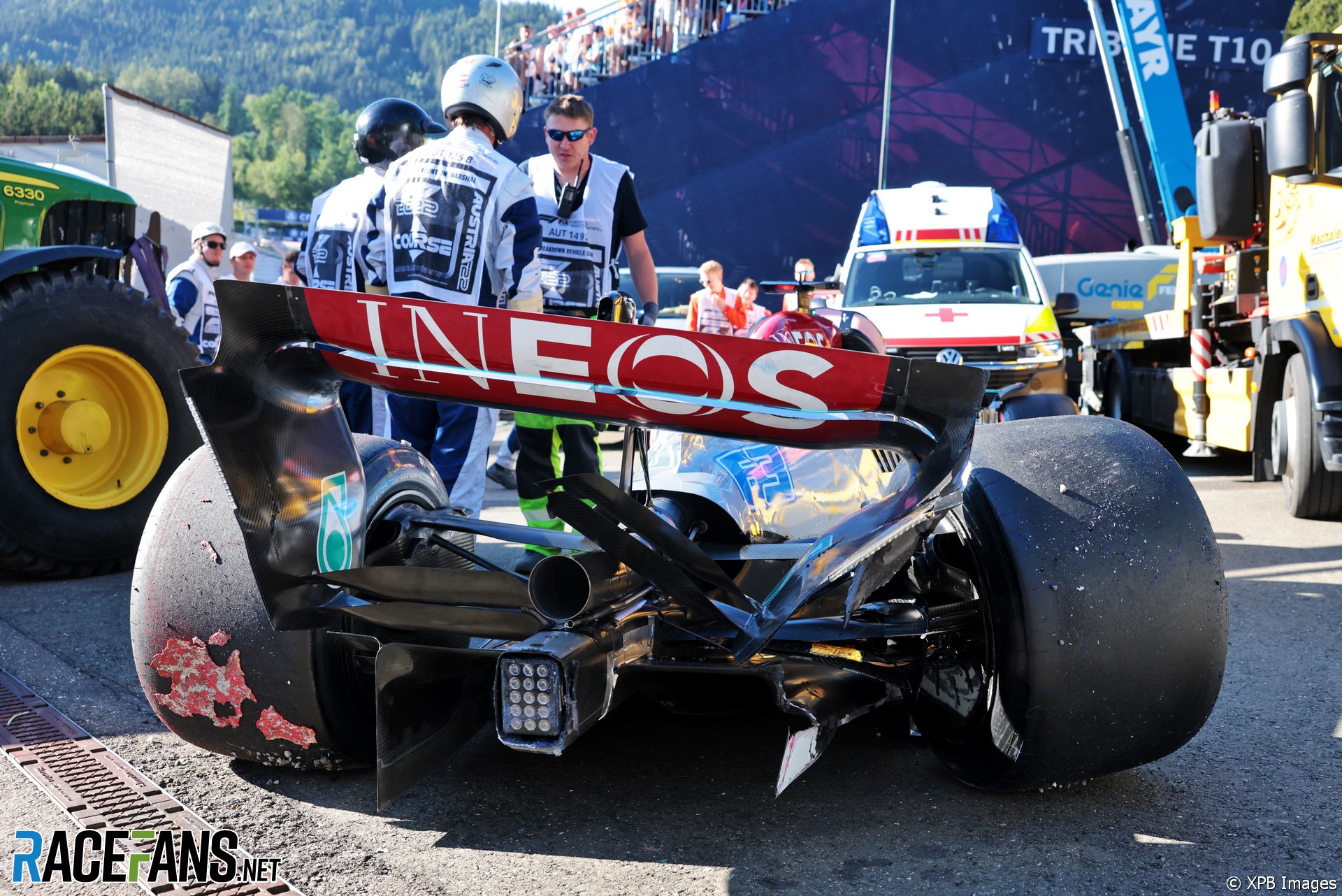 Mercedes has explained why Lewis Hamilton received the team’s sole remaining new-specification rear wing after both drivers crashed during qualifying in Austria, despite taking a lower grid position than his team mate.

Hamilton and George Russell hit the barriers during Q3 at Spielberg, leaving the team with a complicated rebuilding job.

“When you crash two cars it’s always going to make for a very difficult weekend from then onwards,” he said in a video released by the team. “We’ve done quite a lot of damage to the cars. We’ve broken both floors, we’ve broken both rear wings, we damaged quite a lot of suspension, on Lewis’s car we also damaged the front wing and [did] some cosmetic damage to the chassis.

“So [it’s] damage that we can repair but not over a weekend. That meant completely rebuilding Lewis’s car from scratch and it meant also trying to build one floor out of two. We had one complete spare [floor] we could fit and we had to get the best out of the two crashed floors to build another.”

Significantly, with both new-specification rear wings damaged, the team were only able to recreate one. As the older rear wing was a higher-downforce example, this was given to Russell, as he had qualified five places ahead of Hamilton and therefore had fewer cars to overtake.

“We were compromised on George’s rear wing because we only had one complete spare rear wing,” said Elliott. “That we chose to fit to Lewis’s car because he was going to have to come through the field, which meant that George had to fit a rear wing which was probably not the ideal level of downforce. It was a bit too much downforce for that circuit.”

However Russell was at least able to resume running before Hamilton, who didn’t get going again until later in second practice.

“Having rebuilt the cars we also had to dial in the set-up again and you’ve got very limited time in FP2 to do that and that was always going to be another compromise.”

The team was so short on parts, following the crashes, that if the drivers had had another incident during the sprint race they could have been forced to miss the grand prix.

The full rebuild of Hamilton’s car was completed on Saturday morning, ahead of the practice session. “In Lewis’s case he had done so much damage to the chassis – actually only cosmetic damage but damage that we couldn’t fix in the field – we had to sort of build his car from scratch on Saturday morning.

“So, that car had to be built from nothing, fitting the engine, the gearbox, all the suspension, all of the car systems that bolt around the chassis. It all had to be put in place and the mechanics managed to do that in three-and-a-half hours on Saturday morning which is an amazing achievement and all credit to them for actually getting us back out and into FP2.”