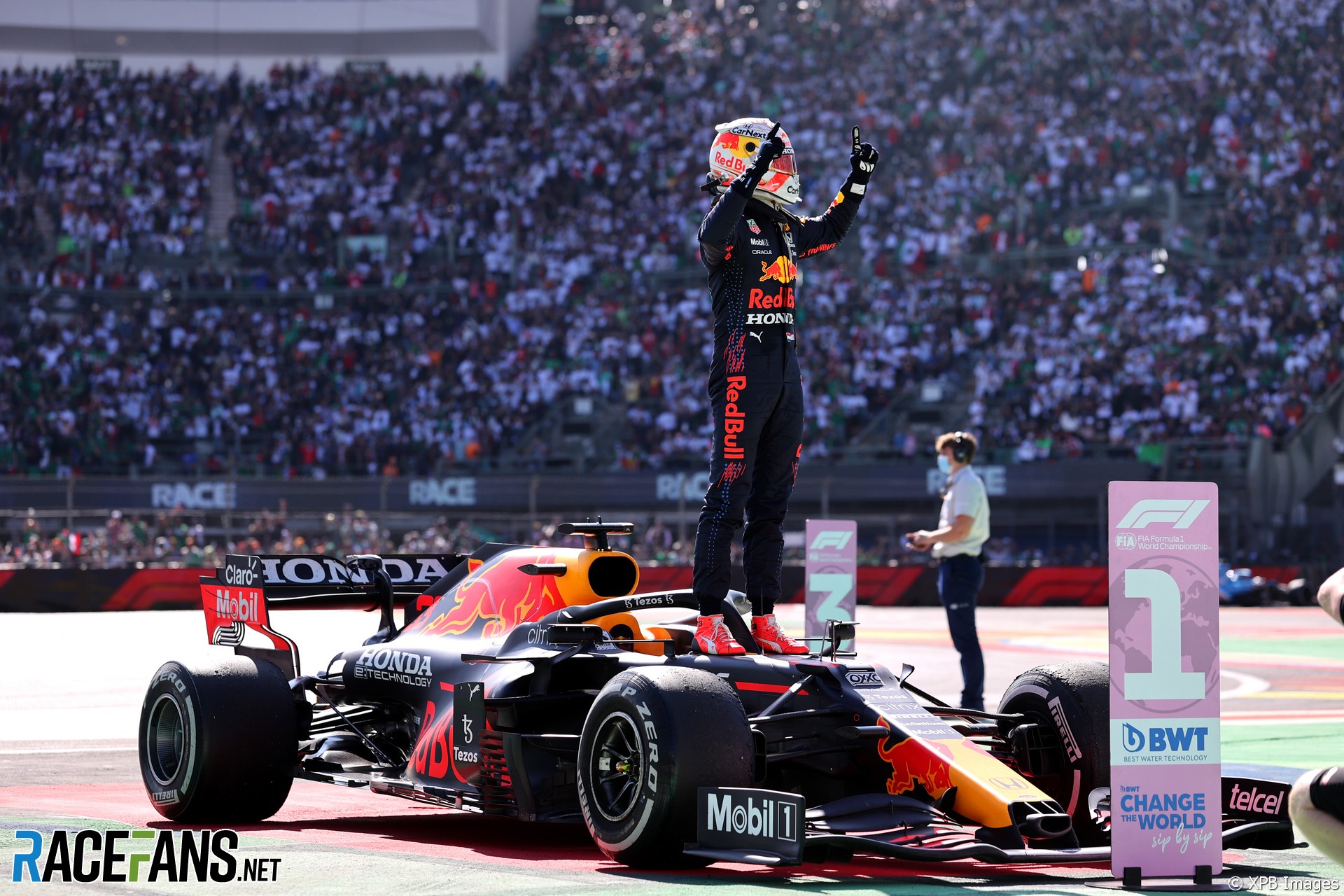 He clicked with the Mexican venue the first time he drove it, when the revised circuit returned to the Formula 1 schedule in 2015. Then, Verstappen was a rookie driving for Toro Rosso (now AlphaTauri). In a car which never finished in the top three, he headed the first practice session on the revised track.

Six years later, Verstappen collected his third win in Mexico City. Had it not been for a momentary misjudgement at the end of qualifying for the 2019 race it could well have been his fourth in a row. Most importantly, it edged him ever closer to Formula 1’s ultimate prize.

One of the more puzzling Saturdays of recent races had produced an all-Mercedes front row, something which looked decidedly unlikely when Red Bull headed the morning’s practice session by six-tenths of a second.

Between those two sessions the RB16Bs underwent speedy surgery to their rear wings – Max Verstappen said one showed signs of cracking. Was this the cause of their unexpected loss of pace?

It seemed not: Red Bull changed no parts on their cars before the race, yet they were far more competitive on a sweltering afternoon where track temperatures exceeded 48C.

Mercedes saw this coming, and apparently discussed how to contain the Red Bull threat at the start. It was to no avail, however, as Verstappen charged alongside Lewis Hamilton and Valtteri Bottas, braked late and deep on the racing line, and swiped the lead from their hands.

“Three wide going into turn one, of course that’s something quite typical at this track,” said Verstappen. “It’s exciting but also you have to be really precise because speeds are really high.

“Braking into turn one, the start tyres are cold, brakes are cold going into that corner. But it was crucial today for me to get ahead there and I could just do my own pace from there onwards.”

Afterwards Mercedes team principal Toto Wolff said Bottas had been too generous in the amount of space he left the world championship leader. Hamilton agreed: “He left the door open for Max and Max was on the racing line, so did a mega job braking into turn one. Because I’m on the inside and on the dirt, there was no hope for me.”

Verstappen owed his daring and ultimately race-winning pass for the lead to a mixture of improvisation and bravery. “You can’t really practice how a start is going to go because you end up left, middle, right, depends on what happens,” he explained. “But once I was on the outside and basically on the racing line, I knew exactly where I was going to brake.

“It’s always a tricky one. The car on the inside is fully into the dirt because nobody is really driving there, so they can never brake as late as the car on the outside, also because of the angle going into the corner.

“I knew where I was braking was really on the edge because you could see I was also getting close to the white line on the exit. I knew if somebody would brake later on the inside he would have definitely gone off the track. So I just went for it and it worked.”

It got worse for Mercedes. As Bottas took the apex of turn one Daniel Ricciardo, who’d started six places behind him, arrived with a locked front-right wheel and nudged him into a spin.

Bottas lit up his rear wheels and in the ensuing mess Mick Schumacher and Yuki Tsunoda tripped over Esteban Ocon. The Haas and AlphaTauri were out on the spot, while the apparently granite-hewn Alpine motored on and the Safety Car was deployed.

The Mercedes which headed the field on lap two therefore belonged neither to Bottas nor Hamilton but Bernd Maylander. Behind him was race-leader Verstappen, Hamilton and Sergio Perez in the second Red Bull, who’d taken evasive action at the first corner when Ricciardo clobbered Bottas.

Pierre Gasly held his position ahead of the Ferraris and was now fourth. Antonio Giovinazzi had started brilliantly from 11th, gaining five places, and now had Charles Leclerc ahead and Carlos Sainz Jnr in his mirrors. Typically, this was only a prelude to a disappointing slide back to where he started.

When the pack was released on lap five it soon became obvious there would be no fight for the lead today. Verstappen was 1.8 seconds clear when they came around again, and after a dozen laps his lead really started to grow. By lap 16 he was 6.4 seconds ahead of Hamilton, who now had Perez within two seconds of him.

Hamilton in race for second

Mercedes couldn’t afford to let Perez come into the pits before them, and gain the benefit of lapping on fresher tyres. But they hung on until lap 28 of 71 before bringing the world champion in for fresh rubber. He emerged behind Leclerc, and though Hamilton couldn’t pass, the Ferrari was matching Perez’s lap times. The television graphics briefly indicated Red Bull could have brought Perez in and got him ahead, but with Leclerc peeling into the pits at the end of the lap it was never a sure thing.

Instead Red Bull let Hamilton lean on his tyres for a bit, pitted Verstappen in good time to ensure he remained safe, and kept Perez running until lap 40. That left him 30 laps to close down Hamilton’s 9.5 second advantage with tyres that were 12 laps fresher.

With 11 laps to go, Perez was within DRS range of Hamilton. All around the Autodromo Hermanos Rodriguez the chasing Red Bull was cheered to the echo as if he was hunting the race leader.

But to the crowd’s disappointment, Perez never got close enough to make a bid to pass, beyond the slightest of looks at the inside of Hamilton’s car at turn four on the final lap. “I didn’t have a chance,” he admitted afterwards. “Overtaking here is really difficult, given their straight-line speed, they were really strong on that.

“I didn’t have a chance so it was a bit of a shame because I think we had the pace to finish one-two today.”

Verstappen had pace to spare – he won by 16 seconds, but it could easily have been more. In the final laps he kept himself amused by thwarting Bottas’ effort to take the fastest lap bonus point away from him. The pole-winner had suffered further misfortune with a slow pit stop, and his only remaining purpose in the race was to deprive Verstappen of his bonus.

Mercedes brought him in, and Bottas emerged behind Verstappen. With soft tyres on, he soon passed the Red Bull, but over the objections of his team Verstappen stayed close enough to force the appearance of blue flags, requiring Bottas to let him by again.

So an increasingly frustrating day for Bottas concluded with his fourth visit to the pits for further fresh tyres which allowed him to claim the fastest lap. The point would not go to him, as he finished well outside the top 10, but nor would it go to Verstappen. Bottas therefore ensured Mercedes retain a one-point lead in the constructors championship.

Gasly ensured the three Honda-powered cars which reached the finish all featured in the top four, after a classy drive which kept the Ferrari pair at arm’s reach.

Ferrari threw everything they had at the AlphaTauri: Leclerc pitted early to ‘undercut’, Sainz ran long. When Sainz caught his team mate on quicker tyres Leclerc let him through to go after Gasly. When that failed Sainz handed the place back.

Though unsuccessful, it was an example of well-worked team co-operation which was light years from the days of 2019, when Ferrari tried in vain to order one of their drivers to let the other by. Sainz surrendered a six-second lead over Leclerc to give his place back, which cost him his chance to finish on the lead lap.

Giovinazzi’s hopes of finishing in the points were dashed when he lost time behind the recovering Ricciardo and Bottas. Kimi Raikkonen therefore salvaged points for Alfa Romeo with eighth behind Sebastian Vettel. Fernando Alonso added two to his tally with ninth after a poor pit stop and an excellent pass on George Russell.

It was a dire afternoon for McLaren. With Ricciardo’s afternoon ruined by turn two, their hopes rested on the shoulders of Lando Norris, who recovered to tenth place for a single point. Ferrari therefore passed them in the constructors’ standings, and drew 13.5 points clear.

Verstappen’s lead over Hamilton now stands at 19 points. But with 107 still available, he’s taking nothing for granted, and wary of a Mercedes fightback at the next round.

“Every single race we have to try and nail the details,” he said. “We didn’t do that yesterday. Things can go wrong very quickly, or can go right.

“It’s going to be really tight and exciting to the end. This has been always a track really good for us, so I expect Brazil not to be like it was today.”