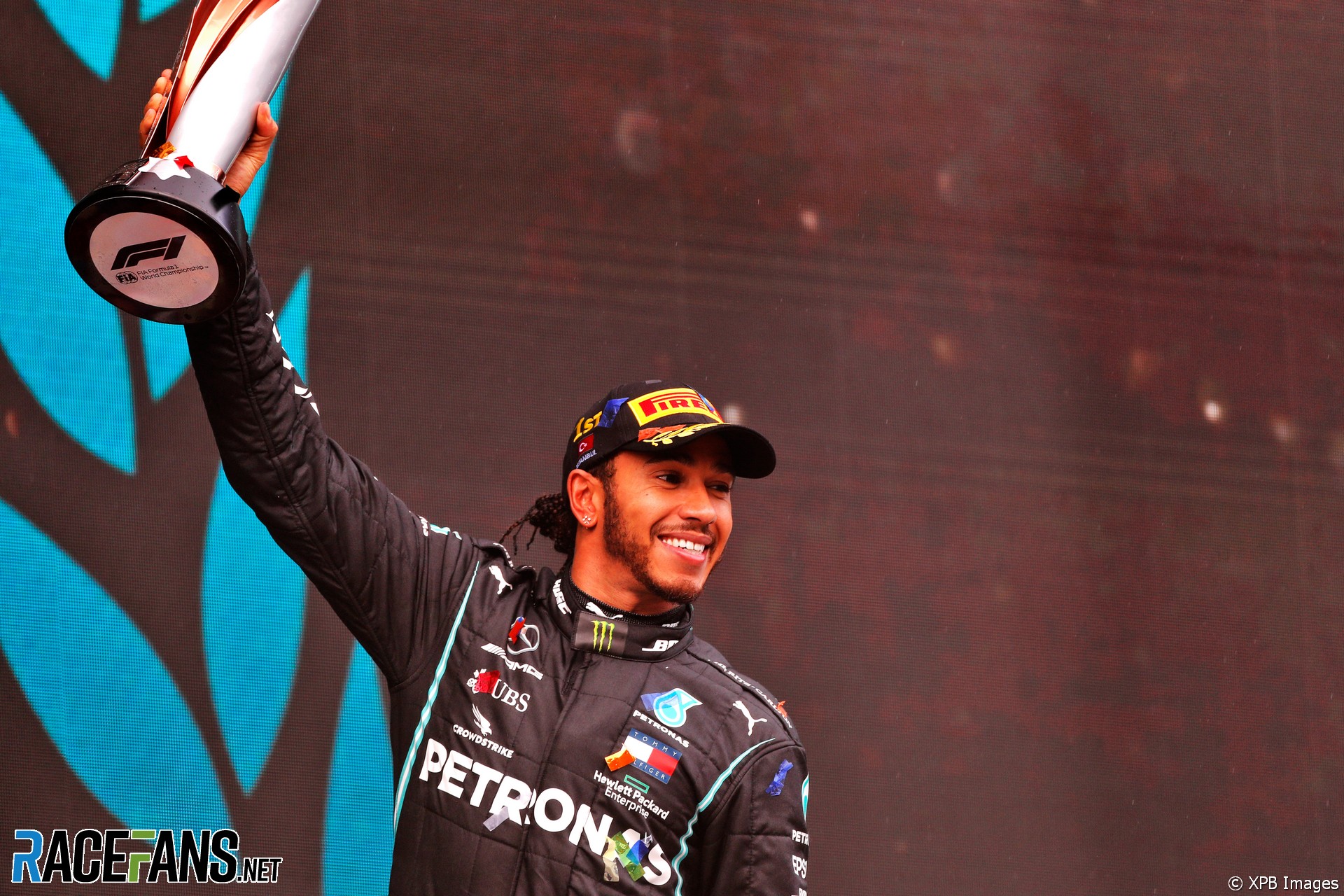 Lewis Hamilton‘s inclusion in the United Kingdom’s New Year Honours list is significant, not only because the record-setting Formula 1 world champion’s knighthood has been forced through by the prime minister, but because Hamilton becomes the first active F1 driver so honoured. Assuming he renews his contract with Mercedes, that is.

Just five F1 personalities had previously been knighted: Drivers Sirs Jackie Stewart, Stirling Moss and Jack Brabham, plus team figures Frank Williams and Patrick Head. The first three were honoured after they had retired from active competition, while the Williams team founders felt the touch of the royal sword towards the end of their careers.

In contrast, various champions in numerous other sports – many with lesser global appeal than F1 – have been knighted while at the peaks of their careers. Figures in the spheres of entertainment, business and politics are regularly honoured while in office. Indeed, a number of sports personalities have been knighted after a single title or medal won, yet both Stewart and Brabham had scored triple titles and retired before being recognised.

The UK honours operates to a ‘traffic light’ system, with red signifying ‘no chance’, amber meaning ‘must try harder’ and green being a signal to ‘practice your kneeling’. There have long been official concerns about certain aspects of Hamilton’s affairs, not least his tax record – he has been resident in Monaco for a decade, while his private jet, now sold, was said to have been acquired via creative accounting.

But Hamilton is entitled to live in Monaco or wherever he fancies. And, as Baron Peter Hain maintains, Hamilton features among the top 5,000 UK taxpayers. The issue was that HMRC, the UK revenue service, has been unable to fully assess his compliance.

Hamilton, meanwhile, has pointed out that his activities support thousands of jobs at Mercedes’ F1 base in Northamptonshire. That may be so, but it is not as if they would be laid off if he retired.

The problem for high earners is that the UK’s top tax rate is 45%, which means that for almost every second lap completed by a British-based grand prix driver, his earnings head to the Treasury. True, company executives face the same burden, but sitting round a boardroom table hardly carries the same risks as sliding into a cockpit. Plus, race drivers have limited earnings windows.

The flipside is that Britain’s infrastructure made it possible for Hamilton to realise his dreams. The grandson of Grenadian immigrants, he is unlikely to have scaled the heights of F1 had the family not settled in the UK – Hamilton’s mother Carmen is English – while his junior career was largely funded by McLaren in partnership with Mercedes-Benz UK and other commercial interests. It is only fitting that he pays some dues in the UK.

Understandably, tax issues are frowned upon by civil servants, who are said to have given him an ‘amber’. This does not, though, suit the populist style of prime minister Boris Johnson. Hamilton counts as a full-on British hero, having risen from a Stevenage housing estate to not only dominate a mainly white sport, but break or equal every meaningful F1 record en route, and become a global sports icon.

In addition to his sporting prowess Hamilton has embraced veganism and pushed for greater environmental awareness. Arguably his greatest public achievement has been his high-profile campaign for the Black Lives Matter movement – he persuaded 70% of his grid peers to ‘take a knee’ pre-race. In June Hamilton founded his eponymous Commission in conjunction with the Royal Academy of Engineering in order to research and improve the representation of black people in British motorsport.

Others would likely have been honoured for any one of these activities – sporting, environmental or social matters. The mere fact that Stewart is the only home-grown world champion to have been (belatedly) knighted suggests that Buckingham Palace and successive governments viewed motorsport with varying degrees of suspicion. This situation is unlikely to have been aided by the past antics of some of F1’s figures.

Still, as evidenced by Brexit, what Johnson wants he invariably gets by whatever means – fair, foul or filibuster – and so it is with Hamilton’s knighthood. The honours system provides for a Diplomatic Service and Overseas List which, according to the Gov.uk website, “recognises people who have given exceptional service to the UK abroad and internationally” (for comparison, a recent list of other overseas recipients of honours can be found here).

It is absolutely fitting that Hamilton is being honoured at the end of his record-equalling seventh championship season. More gratifying, though, is that the Palace has at last recognised that F1 has a place in the British honours system, particularly given the valuable contribution made by the sport during the pandemic.

On that basis ‘Sir Lewis’ will be rising to the sword not only in celebration of his achievements, but also on behalf of the entire British F1 industry.