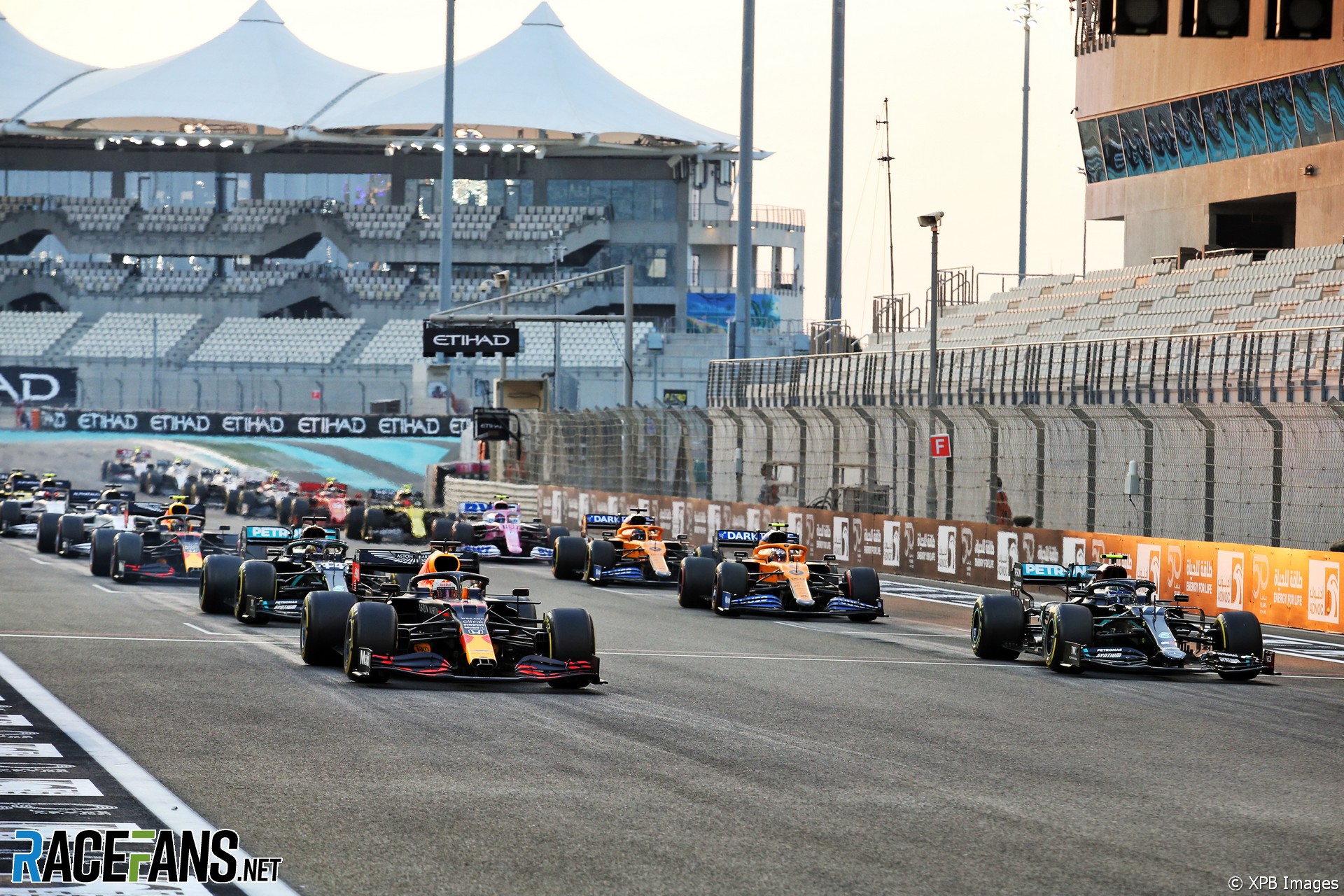 The 2020 season might not have happened as intended but there was still plenty of dramatic racing. Here’s how the RaceFans readers ranked all seventeen rounds, from least-loved to best.

Rarely a highlight of the calendar, despite resolving several intriguing battles the Abu Dhabi season finale wasn’t just the lowest-scoring race of the year, it is the worst rated race we’ve had since beginning Rate the Race back in 2008.

Max Verstappen took his first pole of the year – the first not powered by Mercedes – and also his second victory. Team mate Alexander Albon managed to improve from fifth to fourth and finished closely behind the Mercedes in second and third. But with the top three holding the same positions all race long, to say this wasn’t a classic would be putting it very kindly.

The most notable feature of the Spanish Grand Prix is that the familiar front-starting trio of Hamilton, Bottas and Verstappen had reordered themselves to Hamilton, Verstappen and Bottas by the time they crossed the finish line. Compared to Yas Marina, that was riveting stuff.

Spa is normally a hotly anticipated Grand Prix on the calendar and last year’s Charles Leclerc victory made your top six. This year, however, it wasn’t to be – particularly for the team in red. Despite a scrappily passable start to the 2020 season, Belgium brought a new low to a straggling Ferrari and a shambolic qualifying as teams searched for slipstreams couldn’t redeem the situation. Plenty of midfield action didn’t make up for the spectacle of the Ferrari cars qualifying thirteenth and fourteenth and crossing the flag in the same positions.

Average rating: 5.0/10
A grand prix of errors, in many ways, including a first-lap misjudgement that saw Sainz go off-track and into a barrier, ending his own race and ruining his team mate’s (amongst others shortly before Leclerc and Lance Stroll collided and the Racing Point’s running also ended. Lewis Hamilton had started from pole but was handed two ten-second penalties for practicing starts too close to the pit lane exit, effectively gifting the win to Bottas.

A drying track led to some tension about when to dare go for slicks, both Haas cars the only ones bold (or desperate) enough to switch from the start.

After playing rain-chicken with strategy, Hamilton was eventually able to take a straightforward win with a huge margin, however, battles down the field gave plenty of action and a last-lap fight between Bottas and Verstappen for second kept it interesting to the very end.

A hot day in Northamptonshire plus an early Safety Car period meant Pirelli’s hardest compounds were under strain and late-race blow-outs for Bottas and Sainz wrecked both their races.

Verstappen very nearly took his first win of the season when Hamilton also fell prey to a disintegrating sidewall on the final lap. The Red Bull was just a few hundred metres behind Hamilton as the Mercedes driver limped across the line with just three tyres fully inflated.

Formula 1’s return to Imola was unkind to its other Italian team, after Monza had hurt Ferrari. Pierre Gasly qualified on the second row but was forced to retired early into the race with a mechanical failure, despite running well until then.

Verstappen suffered a tyre failure in the later stages of the race, prompting a Safety Car period during which George Russell denied himself a chance of his first F1 point, crashing heavily.

Hamilton’s first win of the 2020 season, at the second race of the year. The Styrian Grand Prix proved no two races are the same, even run a week apart at exactly the same track – useful, given this calendar trick would repeat in the pandemic-affected calendar.

The Ferrari pair collided on lap one, spectacularly breaking Vettel’s rear wing and Leclerc’s front, ultimately leading to both retiring from the grand prix. It might have been the first appearance of the Hamilton/Bottas/Verstappen podium template which soon became drearily familiar but behind them there was drama to the chequered flag. Sainz grabbed the fastest lap bonus point on the penultimate tour while Ricciardo, Perez and Stroll crossing the line three-wide, separated by only two tenths of a second.

At the time, it might have been reasonable to fear this might be the only 2020 race not won by a Mercedes driver. Severe tyre degradation affected the previous week’s race at Silverstone and Pirelli supplied softer compounds for the second weekend. Verstappen delivered a masterclass in management that saw him confidently take victory away from the Mercedes drivers, who blistered their rubber.

The Nurburgring’s first F1 race for 2020 delivered a hammer blow to Bottas’s title hopes as he retired, though Hamilton had already muscled his way past his team mate.

Concerns going into the weekend were that Pirelli’s tyres would not be able to hold up to the demands of Portimao with modern F1 cars. However, the cooler temperatures of race day and slippery, freshly-laid surface alleviated those concerns.

Carlos Sainz Jnr sensationally took the lead at the start as light rain fell. The usual Hamilton-Bottas-Verstappen top three was reformed after an entertaining afternoon racing, witnessed by actual spectators for once, and Hamilton surpassed Schumacher’s win record with a classy 92nd triumph.

Two red flag periods disrupted the race following a pair of major incidents: A shocking crash on the start-finish straight following a Safety Car period and an alarming tyre failure for Lance Stroll on one of the quickest corners on the Mugello circuit.

Amid the chaos Mercedes scored another one-two and Alexander Albon seemingly boosted his chance of staying at Red Bull by finally scoring his first podium finish.

The first race of 2020 was not expected to be a classic but its high rating does not come from only being the first grand prix which followed one of the longest breaks between rounds F1 has ever seen, due to the Covid-19 lockdown.

Bottas made a convincing start to his title campaign, though one he proved unable to sustain, by winning. Hamilton made a rare error, hitting Alexander Albon for the second time in three races, and copping a penalty which dropped him off the podium.

Lando Norris’s flying final lap allowed him to claim the final spot on the rostrum, and Leclerc took what turned out to be Ferrari’s best finish of the year at the first race.

If 2020 is to be regarded as an excellent year for Formula 1 racing then the Italian Grand Prix has to be a stand-out moment. Gasly scored a shock win for AlphaTauri in a race disrupted by red flags triggered by a heavy crash for Leclerc.

Ferrari’s sorrows were AlphaTauri’s joys. Gasly’s win was hard-fought for it, out-running McLaren’s charging Carlos Sainz Jnr up until the chequered flag. Hamilton had taken himself out of contention by copping a stop-go penalty by entering a closed pit lane.

Gasly wasn’t the only first-time winner in 2020. Perez, seemingly two races away from ending his F1 career as Racing Point had announced mid-season they were tearing up his contract, scored an unfathomable win after being knocked into a spin on the first lap and falling to 18th and last.

Russell looked on course to take victory while substituting for a Covid-struck Hamilton until misfortune intervened – twice. First Mercedes fumbled a pit stop, sending him out on tyres meant for Bottas, then he developed a puncture while closing on Perez. That left the Racing Point driver home free.

Istanbul Park had been a much-missed venue but F1’s return, especially to the notoriously high-speed turn eight, did not go as expected. A last-minute resurfacing of the track left it almost grip-less, a situation not improved by the absence of any support races and the arrival of persistent rain from Saturday.

Although the slowest grand prix of the year by far, plenty of action and rare errors by podium regulars like Verstappen meant a Hamilton, Perez, Vettel finish that satisfied fans’ desire for unpredictability. Mercedes were an incomprehensible four seconds off Stroll’s pole position time in qualifying, yet Hamilton patiently worked his way forward for clinch his seventh championship with victory.

How do this year’s races compare with previous seasons? And which tracks tend to provide the best racing? Find all the data here:

Was the Turkish Grand Prix the best race of last season? Was the season finale really that poor?

Have your say in the comments.