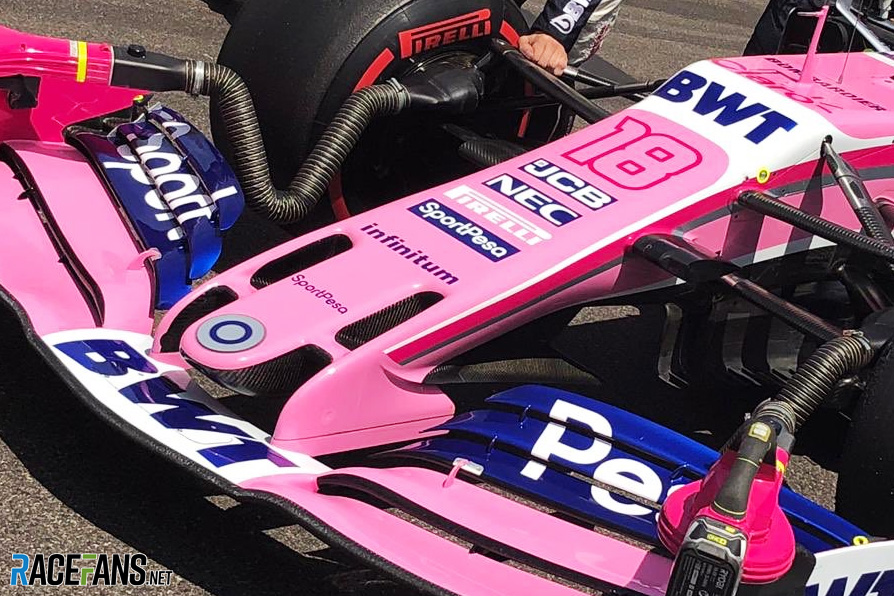 Racing Point’s car development remains somewhat hamstrung by the fact their chassis was conceived in the middle of last year when the team was in administration, its future unclear, and funds scarce. An upgrade package introduced in Spain has had mixed results at best, but it is continuing to refine its RP19.

In Canada team team devoted some free practice time to running a revised nose. While it retained the distinctive vented design familiar from recent seasons, Racing Point modified it to incorporate a Mercedes-style under-nose cape.

Mercedes re-introduced the cape aero device in early 2017; similar snowplough-like devices had been seen in F1 before. In its current form the cape is merely a different means of creating a turning vane effect under the raised nose of the car. We have seen other teams start to copy this solution, albeit with different nose tip solutions to the pointed Mercedes nose cone.

With their interpretation of the cape, Racing Point have used the vented nose to good effect. The usual horizontal divider inside the nose tip has been raised. It reaches back to the start to form the cape’s surface.

Air passing through the vents in the nose therefore passes over the cape and the airflow below goes under. Where these two different pressure zones meet at the tail of the cape, vortices are formed, which pass back through the bargeboard set-up to control the airflow back along the car.

Like most changes in the bargeboard area, this improves the car’s aerodynamic efficiency as it reduces the loss in rear downforce from front tyre turbulence, which affect the rear aero surfaces. With a gain in lift-to-drag ratio, the team can enjoy a higher top speed from the old wing settings or add more wing angle for more downforce for the same top speed.

One comment on “Analysis: How Racing Point’s new cape works with its unique nose”