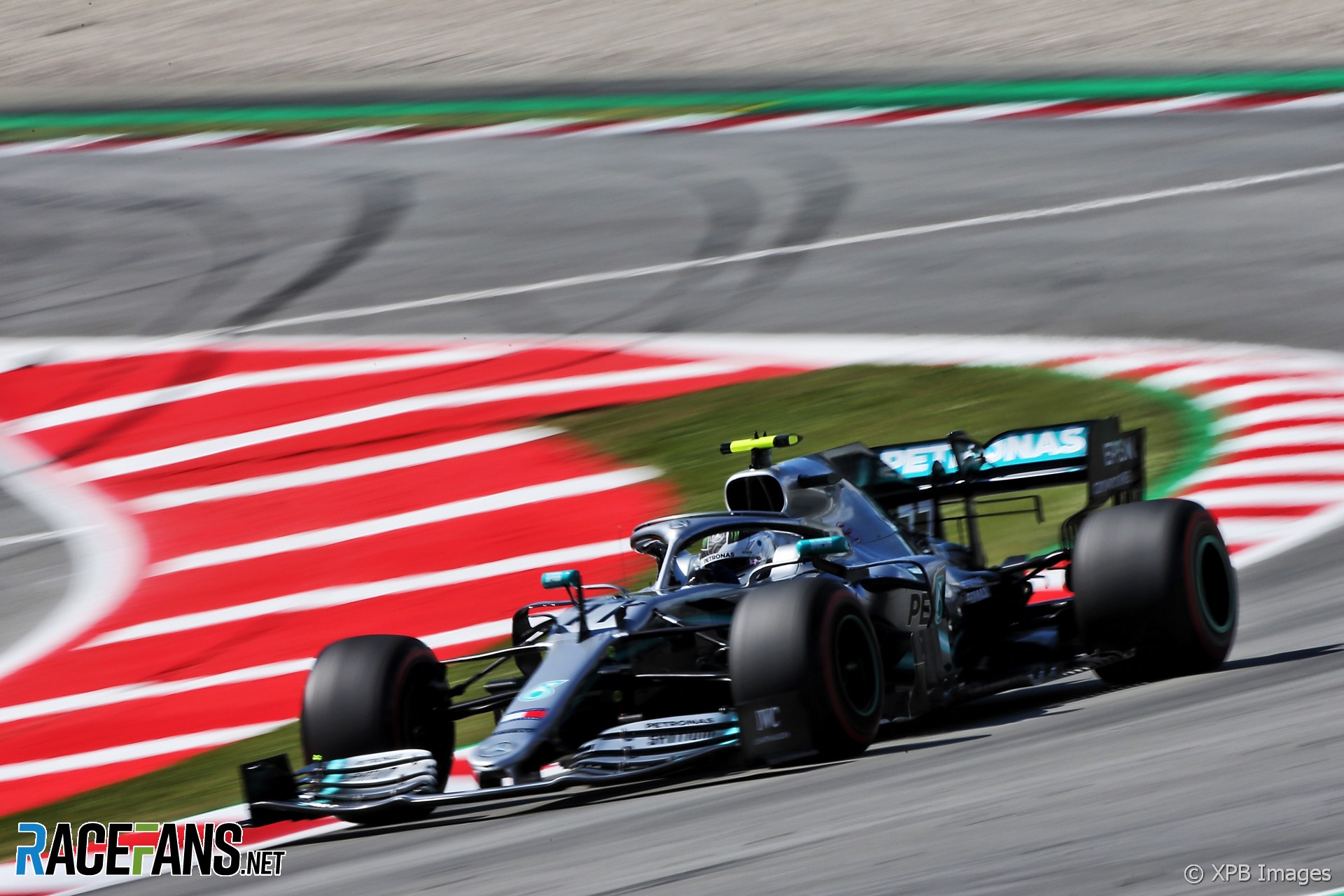 Valtteri Bottas scored his third consecutive pole position in a row, beating team mate Lewis Hamilton by six tenths of a second in qualifying for the Spanish Grand Prix.

Mercedes led the way in the first phase of qualifying, though Hamilton found traffic in the middle of his first flying effort. That allowed Bottas in to lead the way. Verstappen impressed for Red Bull, setting the third-quickest time.

But the real action was in the battle to gain a spot in Q2. The Renault drivers were in danger of dropping out, and Nico Hulkenberg put himself at a disadvantage by understeering into a barrier at turn three. But he limped back into the pits and was able to continue.

A late effort put him 15th and potentially safe, though he was inside by less than a tenth of a second. He was vulnerable to the last runners, including Kimi Raikkonen, who became the only Alfa Romeo driver to escape the bottom five with a tidy effort half a second faster than his team mate.

Sergio Perez and Daniel Ricciardo grabbed the last two places in Q2, the latter displaying his team mate by less than two-hundredths of a second. “I’m sorry about that guys,” said Hulkenberg afterwards.

Lance Stroll was also on the wrong side of the divide, missing out on Q2 by less than a tenth of a second. It’s the fifth time in as many races he’s failed to progress beyond Q1.

The Williams pair also dropped out as usual. Despite his final practice crash and a spin early in Q1, George Russell out-qualified Robert Kubica once more. The pair were separated by over a second, Kubica saying he was held up by a Ferrari and complaining of oversteer on his final set of tyres.

Leclerc cut things very fine in Q2. He slipped outside the top 10 and was the final driver to set a time at the end of the session, urging his team to keep him updated on the progress of their rivals. However he coolly delivered a lap within a tenth of a second of his team mate, and took his place in the final phase of qualifying.

Bottas also did another run at the end despite being comfortably through into Q3 already. He became the first driver to break the 76 second barrier, lowering the track record his team mate had already broken earlier in the session.

The McLaren drivers looked like potential Q3 contenders, but neither of them made it. Lando Norris looked in with a chance when he took eighth with his last effort, but Leclerc and others were still to run, and he was bumped down to 11th.

Carlos Sainz Jnr was almost a tenth of a second quicker than him in the first sector. But at the end of the lap he skidded and run wide in the chicane.

Like Norris, Raikkonen initially took a place in the top 10 but dropped out as others improved. Perez also made it no further but Ricciardo. having left his team mate behind in Q3, took his Renault into Q3.

The first runs in Q3 proved decisive, and Bottas’s was superior. A 1’15.406 by the Mercedes driver smashed the previous track record, and Hamilton was unable to match him, complaining of traffic from the sole remaining Renault. “You told me really late about Ricciardo,” he complained on the radio.

Ferrari weren’t in the fight. Sebastian Vettel took third, eight-tenths of a second slower than Bottas. Leclerc, now running off-sequence due to his enforced extra run in Q2, could only manage fifth. Max Verstappen, as ever, took advantage, planting his Red Bull on the second row of the grid.

Several drivers had gone off during the course of the session and by the end of Q3 gravel had strayed onto the racing line at several corners. However the session stayed green, and drivers struggled to find improvements on their final laps.