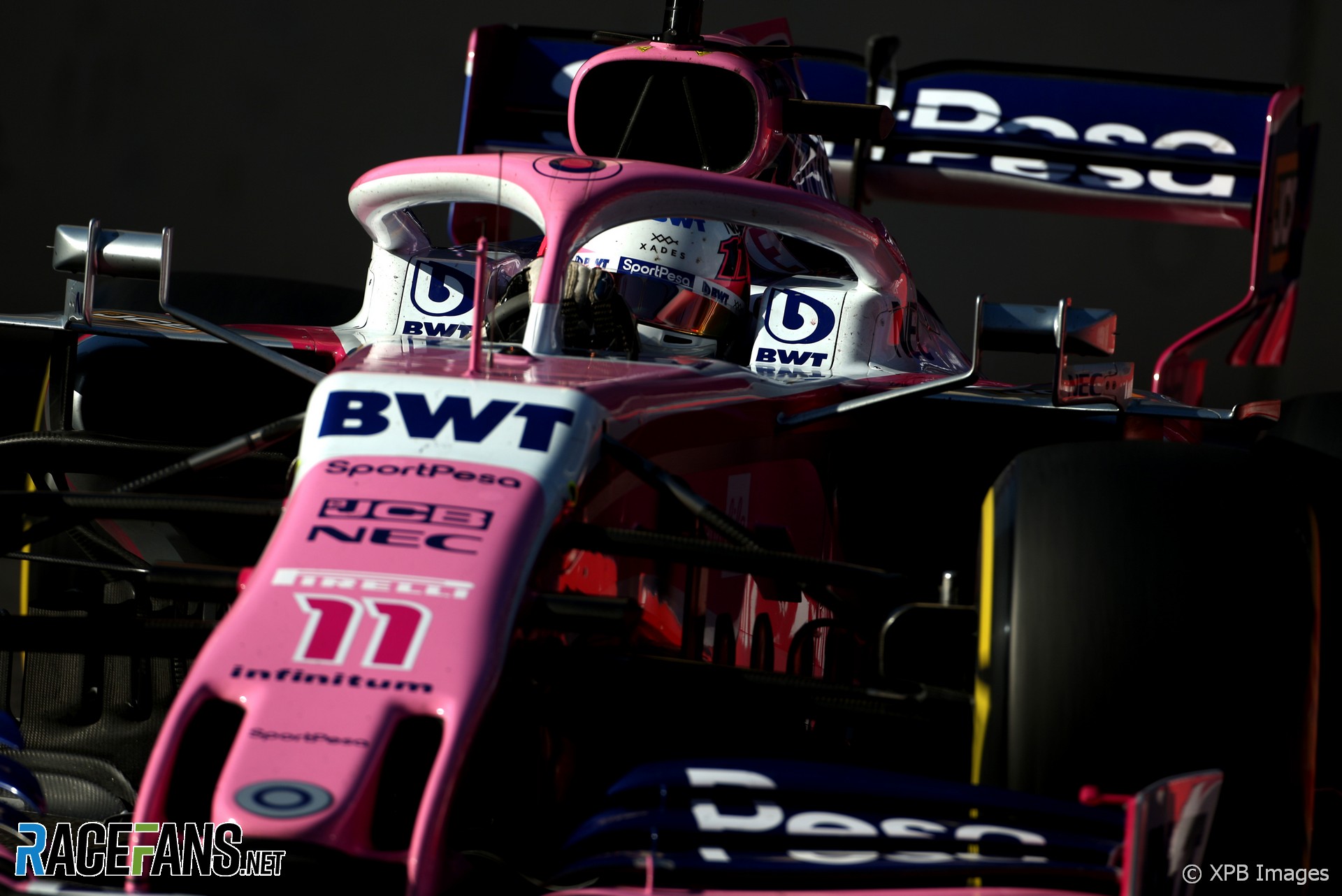 Sergio Perez has had more spectacular results in Baku than his sixth place on Sunday, but this was as hard-earned as either of his podiums.

He was nearly four tenths of a second quicker than his team mate in qualifying, and while Lance Stroll went out in Q1 Perez took his Racing Point into Q3 and claimed a superb fifth place on the grid. At the start of the race he took the fight to Max Verstappen and briefly dislodged the Red Bull driver from fourth place. He stayed ahead until lap five when Verstappen shot past with DRS and Perez, sensibly, realised his fight was with the cars behind them.

Charles Leclerc inevitably bumped Perez down to sixth as he made his way through the field, but for the remainder of the first stint the Racing Point driver kept the McLarens behind, despite Lando Norris attempting to get ahead through an early pit stop.

Mercedes appeared to be on the back foot as the weekend began and Ferrari headed all three practice sessions. Not unexpectedly they were much closer in qualifying, but without Leclerc’s crash they might not have swept the front row. Although it was Hamilton’s turn to decide the running order of the Mercedes drivers Bottas denied his team mate pole position on the final run in Q3, aided by running in Norris’s slipstream

After the lights went out Bottas kept his nose in front of Hamilton as the team mates battled side by side through the first three corners. This proved crucial for the rest of the race, giving him the strategic benefit of first call on pit stops.

He maintained a safe gap and controlled the race from the front and only had to dispose of Leclerc which was straightforward since the Ferrari driver was on older tyres. Towards the end of the race Hamilton mounted a late charge but his turn 16 error meant Bottas was home free for his second win of 2019 and a one-point championship lead.

George Russell arrived in Baku suffering from a respiratory infection. His Friday morning shock can’t have helped: he ran over an improperly secured drain cover in first practice. The team were forced to use a new chassis which meant he went in to Saturday having done virtually no running.

Despite the setback Russell looked by far the more comfortable of the Williams pair who were hustling a grip-less car around a low-grip circuit. He ended the session four tenths clear of his team mate, who stuck his car in a wall. Russell ran a long opening stint on mediums, fell back to 19th, but by the end of the race he finished 15th thanks to retirements ahead. This was a very respectable effort given his terrible start to the weekend.

Renault were nowhere in practice, experimenting with a low-downforce set-up which didn’t work. Ricciardo ruined both sets of tyres in second practice, meaning he couldn’t do a race simulation.

He signed to have finally caught a break in qualifying when he set a time quick enough for Q2 a few fractions of a second before the session was red-flagged due to Kubica’s crash. Promoted to tenth on the grid by penalties, Ricciardo was inevitably passed by Leclerc but also lost a place to Stroll.

It all went wrong in the second stint when he tried to lunge down the inside of Daniil Kvyat for tenth place. Perhaps the move would have worked with a Red Bull’s braking capability, but the Renault skated into the run-off, taking Kvyat with it. Making matters worse, Ricciardo didn’t realise Kvyat was behind him and in his haste to get back up to speed reversed into the Toro Rosso.

Both drivers ultimately retired due to damage and a frustrated and apologetic Ricciardo was handed a three-place grid penalty for the Spanish Grand Prix.

On the other side of the garage the spirits weren’t much higher as Hulkenberg struggled for pace all weekend and was eliminated in Q1 when his final run was cut short by the red flags.

He opted for an early stop to try and undercut the packed midfield but his pace wasn’t good enough and by the end of the race he was struggling for grip. Of the finishers he only managed to beat out the Williams drivers as Renault’s struggles continued.

Although we should always be grateful to Formula 1’s dedicated volunteer marshals for keeping the show on the road, the recovery truck driver who brought Russell’s damaged Williams back to the pits in first practice did not cover himself in glory.

Failing to realise his crane was too tall to pass beneath the bridge over the pit lane, he clattered into it, severing a hydraulic line and spraying fluid all over the FW41.

The phrase ‘you had one job’ comes to mind…

Hamilton got too close to Bottas at the start of his final run in Q3, losing time through the opening sector, though he almost clawed enough of it back to snatch pole. He had a chance to get pas his team mate at the start but stayed his hand, and minor errors during the Virtual Safety Car restart and at turn 16 ultimately meant he had to settle for second.

Ferrari looked like the favourites once again after practice but Leclerc’s crash in Q2 ended his chance of pole position and compromised the team as well as his himself in the race. Vettel never had the pace to challenge the Mercedes drivers and simply followed them home in the race.

Verstappen was close to the two top teams all weekend but never managed to get ahead of them on pure pace. He was held up by Perez for the first few laps which kept him from catching Vettel, but in the second stint Verstappen was the fastest man on track for awhile. As he set continuous fastest laps he gained on Vettel until the VSC ruined his momentum and his tyre temperatures fell.

Gasly’s hopes to finally get close to his team mate were ended on Friday when he failed to stop at the weighbridge which meant he was starting from the pit lane. He made solid progress on a strategy that saw him do a long first stint on medium tyres. Before he had a chance to stop for softs at the end of the race his drivetrain failed and he pulled to the side of the track, which deployed the VSC.

McLaren scored their first double points finish since Baku last year but a late change in strategy did not pay off for Norris. Having beaten Carlos Sainz Jnr into Q3 he was running ahead of his team mate when the VSC was deployed. McLaren gave him a ‘box to overtake’ instruction, which he followed, but the extra stop for a set of softs backfired badly. The stop was slow, he had little grip afterwards, slipped a wall, and it ultimately cost him a place to his team mate.

Stroll hit the wall in second practice and again failed to reach Q2 in his Racing Point. The race went better – he made rapid progress at the start and brought the car home ninth.

Kimi Raikkonen rounded out the top ten despite starting from the pit lane after he was disqualified from qualifying due to a technical infringement. Antonio Giovinazzi’s weekend was again compromised by the team’s reliability woes – he incurred a 10-place grid penalty – but despite starting ahead of Raikkonen fell behind him in the race and finished 12th.

Haas continued to struggle with neither driver able to crack the top 10 in qualifying or the race. Toro Rosso seemed to have strong pace with Kvyat who made it into Q3, but an issue during his opening stint meant he tumbled down the order until he got fresh mediums. He began to make his way back through the field until his incident with Ricciardo forced him to retire. Meanwhile, Albon missed out on the points by one position.

Kubica’s accident in Q1 meant he had to start from the pit lane. The team brought his car out too early which resulted in a drive-through penalty and ruined his race.