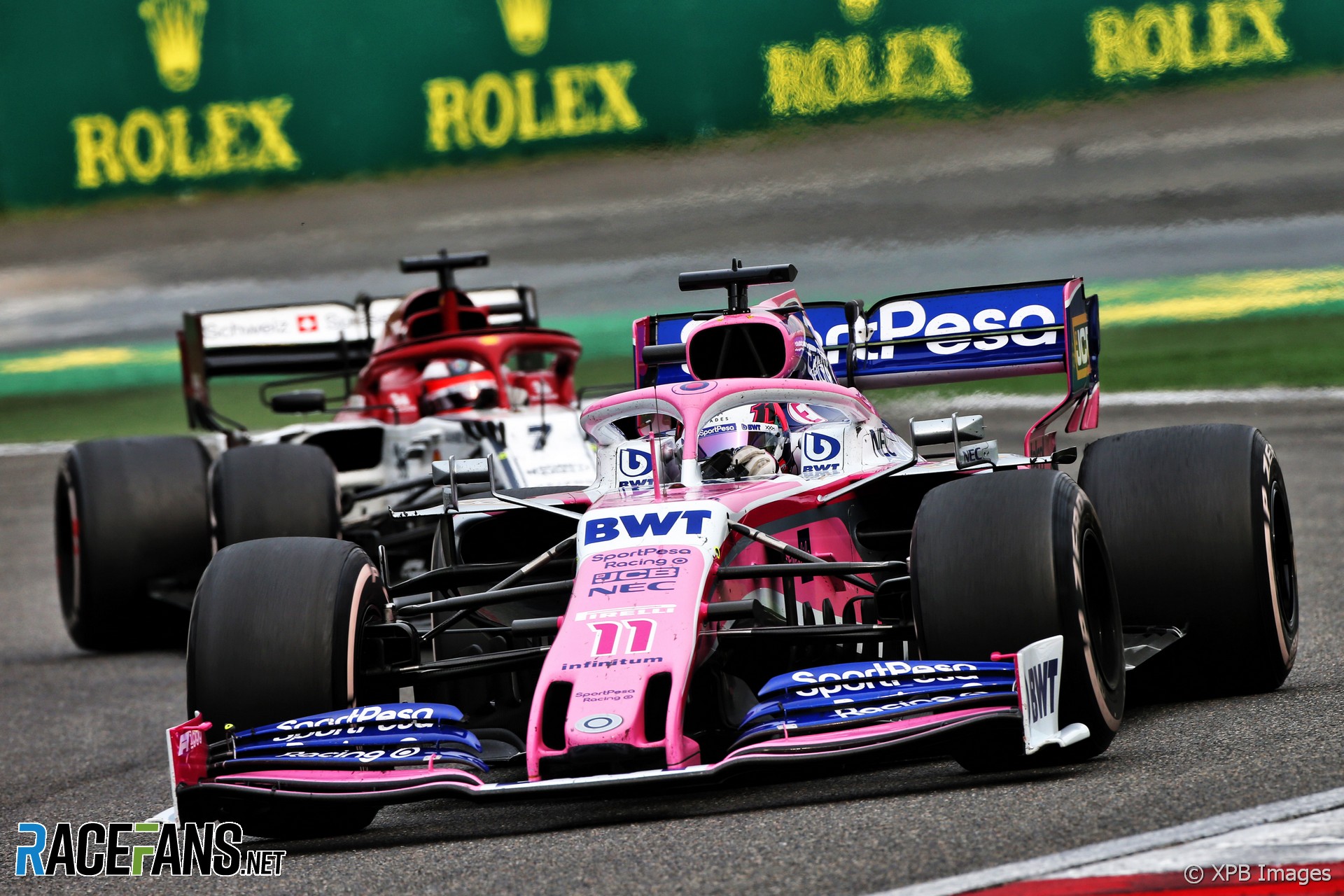 For the first half of the weekend Hamilton flew under the radar. He didn’t top any of the practice sessions, and was always just behind his team mate who took pole by 23 hundreths of a second. Hamilton has struggled with his starts recently but when the lights went out he got away well and eased ahead of Bottas before they had even reached turn one.

He opened up a comfortable margin of five and a half seconds before Bottas stopped first. Hamilton came in the following lap and emerged onto the track with an advantage just under two seconds. This was as close as his team mate came to challenging him, but he extended the gap and led every lap of the race.

Racing Point looked out of shape on Friday but Sergio Perez consistnetly got the best out of the car, out-classing team mate Lance Stroll.

Perez outclassed his team mate all weekend and was a full second faster in qualifying. He missed out on Q3, but started 12th which gave him free choice of tyres to start the race. In the race, the Racing Point driver was in eighth by the time they reached turn six. He opted for the one-stop strategy, but could never find the pace to challenge Ricciardo, who stayed ahead of him for the whole race.

Ricciardo out-qualified his team mate for the second race in a row by a slim margin of four milliseconds to start at the front of the midfield. On the opening lap he stayed out of trouble and stayed ahead of Hulkenberg.

For the rest of the race Perez stayed in Ricciardo’s mirrors but the Renault driver never let him get close enough to attempt an overtake. He made a one-stop strategy work and finished seventh, and best of the rest.

The new Red Bull driver continued to struggle to find pace in a car he has labelled, “unpredictable”. Gasly was nowhere near his team mate in the build up to qualifying and ended up nine tenths behind, but still managed to start sixth. In the race he was stuck in no man’s land between the midfield and the frontrunners as he still searches for the pace in a car his team mate used to pressure the Ferraris with.

Daniil Kvyat failed to make it to Q3 by less than a tenth as the only Toro Rosso driver taking part in the session. A costly first-lap mistake spoiled Kvyat’s race and that of the two, blameless, Mclaren drivers. Leaving too late room for the cars alongside him, Kvyat skidded sideways into Carlos Sainz Jnr and rebounded into Lando Norris. Kvyat was handed a drive through penalty before retiring on lap 41.

Bottas appeared to be the quicker of the Mercedes drivers until the race. He kept Hamilton very honest indeed, only losing out to Hamilton at the start. This turned his race into more of a procession that saw him easily finish second thanks to Mercedes’ superior pace.

Ferrari didn’t have the pace to challenge Mercedes in qualifying or the race and they locked out the second row. Leclerc lost out to Vettel in qualifying, but overtook him at the start which created a headache for the strategists on the pit wall.

Vettel was staying close to Leclerc, but even with DRS couldn’t make a move. The team ordered them to swap, but then Leclerc stayed close to Vettel indicating that neither driver had a significant advantage. Ferrari opted to put Leclerc on an alternate strategy which created separation between their two drivers but meant that their new driver lost out to Max Verstappen, who undercut him during the second series of stops.

Verstappen came close to spoiling the all-Ferrari second row after the first runs in Q3 but didn’t have the pace to compete with an improved lap from Leclerc. During the first stint he kept up with Ferraris and made up ground whenever they swapped positions.

Verstappen got by Leclerc by using the undercut when Ferrari put him on the alternate strategy, and had one shot to get by Vettel with a late lunge down the inside at the hairpin. He couldn’t make the move stick and failed to get close enough for another attempt for the remainder of the race so he finished fourth.

Kimi Raikkonen managed to score points after starting outside the top ten. He possessed more pace than his team mate Giovinazzi all weekend, but part of this was due to the technical problems that plagued the latter’s car. Giovinazzi made it to the end of the race but only managed 15th, while Raikkonen ended up ninth.

Albon was a star of the race but almost ruined his weekend with a huge crash in final practice when he ran wide at the final corner. He was unharmed but the damage to the car was so severe that he was forced to sit out of qualifying and start from the pit lane.

From there he drove a brilliant race that saw him score a point on a one-stop strategy. He extracted maximum life from his fresh set of soft tyres at the start, passedseveral of the stragglers and jump past Lance Stroll in the pits. In the final laps he successfully resisted Grosjean to secure a top ten finish.

Haas got both of their drivers into Q3 again, but didn’t have a competitive race pace. Both drivers finished outside the points for the second race in a row.

Lance Stroll again failed to escape Q1. He has a good start from 16th but fell short of the points and was unhappy with his strategy.

Both McLaren drivers’ races were over when Kvyat significantly damaged both of their cars and forced each of them to stop after the first lap. Williams continued to struggle at the back of the pack with Russell quicker than Kubica all weekend yet again.