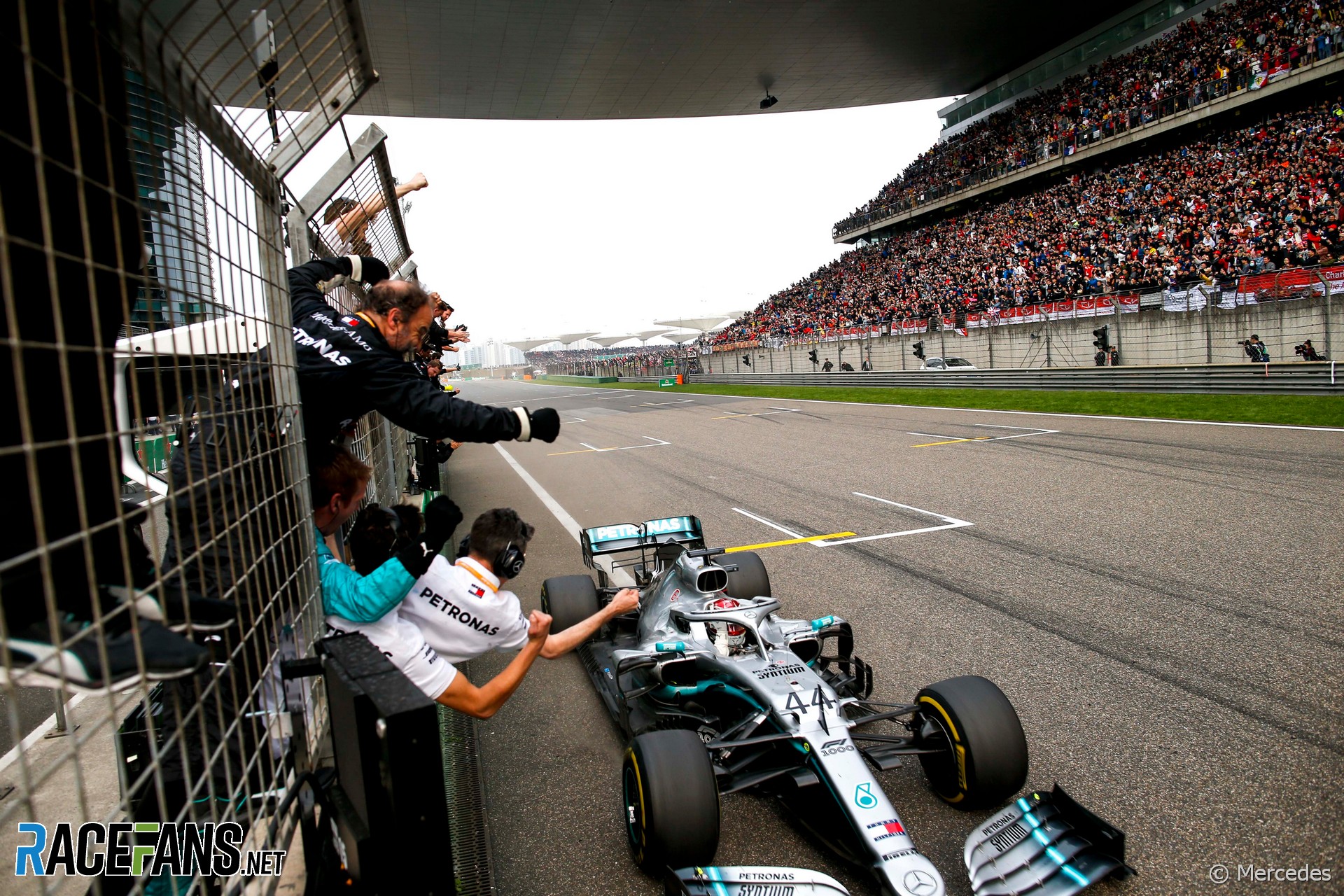 “I think people will remember exciting races a lot more than anniversaries,” remarked Sebastian Vettel after he finished third in the 1,000th round of the world championship in Shanghai yesterday.

He’s right, and it’s why the 2019 Chinese Grand Prix is unlikely to live long in the memory for many. This wasn’t a classic; the outcome was more or less settled once lap two began.

There will probably be two exceptions. The first is Lewis Hamilton, who looked out of sorts in practice but rebounded to beat his team mate to victory.

The other will be Charles Leclerc, who for the third time in as many races was reminded what Ferrari really mean when they say their drivers are “free to fight”.

Mercedes cruise to a one-two

Valtteri Bottas’s explanation for how he lost his advantage also made one think back 35 years, to the time Nigel Mansell crashed while leading a soaked Monaco Grand Prix, and blamed it on a slippery white line. In Bottas’s view, crossing the starting line while his rear wheels were making their maximum traction demand cost him precious car lengths to Hamilton, who started alongside him.

Whether he was right or not, for the third time in as many races the pole sitter failed to keep their lead at the start, and Hamilton was away. He had spent practice trying to get comfortable with his W10, and only once qualifying began did he begin to extract the same kind of lap times Bottas could manage.

Now he was in clear air and Bottas found he couldn’t stay close. “Lewis had a pretty strong stint,” he admitted afterwards. “I was initially close by but obviously when you are behind, you are sliding a bit more, overheating the tyres a bit more.”

By lap 20 Hamilton was five-and-a-half seconds up the road – a sufficiently comfortable lead that Mercedes could afford to pit Bottas first to minimise the danger from the cars behind him. This cost Hamilton over three-and-a-half seconds of his advantage, partly due to Bottas enjoying the quickest pit stop of the race, but within 11 laps the race leader had re-established his advantage.

That proved important as the cars behind pushed themselves into making second pit stops. As last year, when Bottas stunned Ferrari by jumping ahead of him at the first round of pit stops, the power of the ‘undercut’ was strong. Vettel’s first flying lap out of the pits was 1.6 seconds faster than his next tour, no doubt aided by enhanced engine modes.

Mercedes decided to protect themselves by bringing both cars in together. It was a risky tactic, and Bottas lost almost two seconds compared to his earlier stop, but it meant Hamilton was less vulnerable to being jumped by his team mate if he caught traffic at an inopportune moment.

“It was an interesting situation because it was clear that Valtteri in that situation was under pressure from Sebastian,” explained Toto Wolff. “So if Sebastian would have stopped, he would have undercut Valtteri. So the logical choice is to stop Valtteri first.

“But if we would have stopped Valtteri, he would have undercut Lewis. We didn’t want to interfere with the order and we were just about to have the gap to stack them properly.”

Fortunately for Wolff, the chairman of Daimler was there in person to see this first-rate display of F1 teamwork. “It was impressive how the guys did it, the choreography, anyone who understands Formula 1, it was impressive – even Dieter Zetsche called all the mechanics together and said he hadn’t seen anything like this.”

Hamilton managed his lead over the remaining stint and duly notched up his sixth victory at a track where no one else has won more than twice.

Ferrari fumble to a three-five

Ferrari still haven’t figured out how to make their SF90 fly the way it did in pre-season testing. Puzzlingly, they were seven-tenths of a second slower around Shanghai than they had been 12 months earlier. “We know why, though,” remarked Vettel after he took the chequered flag in qualifying.

Whatever the reason, it meant they weren’t an effective threat to Mercedes in the race. Vettel got off the line well but as he explained he wasn’t able to make good use of his advantage and was more concerned about keeping Max Verstappen behind than losing a place to his team mate.

“I thought I had a decent start and then basically no place to go,” he said. “I decided for the outside which I knew, by the time I decided, is not going to take me anywhere but I didn’t want to just lose my advantage because I knew Charles would be somewhere on the inside. I wasn’t quite sure where Max will be. So I wanted to stick with that train as long as I could and probably give Charles the inside and just make sure I don’t lose an extra position.”

As the Mercedes drew away, Vettel’s willingness to let Leclerc by at the start increasingly seemed like a mistake. He stuck closer to his team mate, within DRS range, but didn’t make a move to pass. Asked if he could go quicker, Vettel replied that he could. Leclerc was told to up his pace and, quite soon afterwards, Ferrari made the call to swap their drivers.

Before the season began the team had insisted their two drivers would be “free to fight” but that Vettel would be favoured in “50-50 situations”, whatever that meant. This was the third race time in three races the team had intervened to favour Vettel, so we can now see that by “50-50 situations” Ferrari meant: When Leclerc is much quicker at the end of a race (Australia); When Leclerc is quicker at the beginning of a race (Bahrain); and when Leclerc is possibly slower at the beginning of a race (China).

Leclerc lost around one-and-a-half seconds letting Vettel through. The upshot of this for Ferrari was that their leading car was now 4.9 seconds behind the closest Mercedes instead of 3.7 seconds. And over the following laps that deficit grew at a quicker rate than it had before the swapped.

This wasn’t the greatest tactical blunder an F1 team has committed in Shanghai. But it was a respectable attempt to surpass McLaren’s 2007 effort with Hamilton.

The lost time meant the Ferrari pair were now in greater danger from Verstappen. The Red Bull driver might’ve out-qualified at least one of them if he had started his final Q3 run in time to complete a lap, but he didn’t. The Ferrari swap meant the Red Bull was almost a second closer, and when he pitted before either of them on lap 17 he was guaranteed to at least pass Leclerc. Ferrari had no option but to bring Vettel in and leave Leclerc out to try to extend his stint.

Verstappen triggered another rush of pit stops when he came in again on lap 34. Leclerc briefly moved up to second by staying out, and was able to help his team mate again by briefly delaying Bottas, though not enough for Vettel to get anywhere close to striking range.

There were other opportunities with Leclerc’s strategy which Ferrari missed. They left him out for three laps after Bottas passed him. Although this meant he ultimately had the benefit of eight-lap fresher tyres for his final stint, it cost him in the region of six seconds to Verstappen. Without that, he might have ended the race with a sniff of the Red Bull’s DRS.

That can only really be said with the benefit of hindsight. But it’s true also that even when it became clear Leclerc wasn’t going to catch Verstappen, Ferrari didn’t bother giving him another set of newer tyres so he could try to set the fastest lap and take a bonus point. Perhaps they didn’t want him to take it from Vettel, who held it at the time?

If so they reckoned without Red Bull bringing Pierre Gasly in for a set of softs and snatching the bonus from Vettel by less than a tenth of a second. It was the only time all weekend the number 10 Red Bull had looked fast…

Albon goes from pits to points

Despite race-long pressure from Sergio Perez and, for the most part, Kimi Raikkonen, Daniel Ricciardo hung on to claim his first points for Renault. He was around 20 seconds behind his old team, which didn’t look bad at first. Then you remember Gasly’s extra pit stop. Then you remember Verstappen was a minute further up the road.

At least his Renault kept going until the end. Team mate Nico Hulkenberg dropped out again, much earlier than he had in Bahrain, with a software-related MGU-K problem.

The points-scorers were rounded off, remarkably, by Alexander Albon. The rookie had smashed his Toro Rosso up so badly on Saturday it needed a new survival cell, power unit and gearbox.

In the race he wielded his factory-fresh STR14 to superb effect, cutting his way past the stragglers early on, ekeing out his soft tyres before profitably mugging Lance Stroll by pitting before the Racing Point driver. Unfazed by Romain Grosjean breathing down his neck in the final laps, this was as hard-fought a point as you could take.

In contrast team mate Daniil Kvyat reverted to type on lap one, swiping into former team mate Carlos Sainz Jnr and bouncing into the other McLaren of Lando Norris, ruining both their races. A penalty of some kind was deserved; whether it needed to be quite as harsh as a drive-through was up for debate.

The Williams pair limped in 16th and 17th. For them right now every race is one they’d rather not remember.