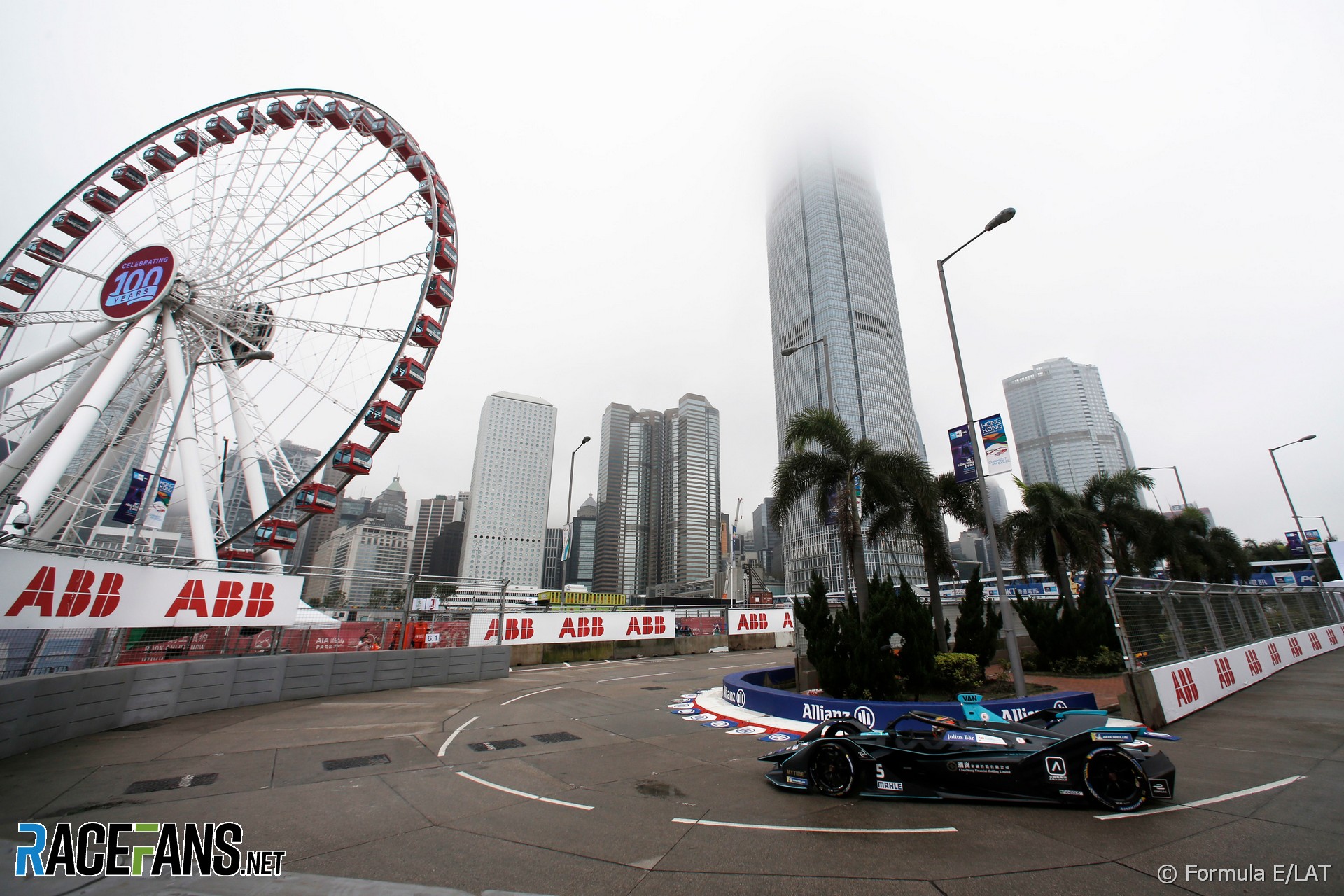 As always, qualifying groups were decided by championship order, with the points-leaders in the first group. It had rained just prior to and in between both free practice sessions and another cloud burst ended just a few minutes before qualifying, leaving the track glossy with water as the first cars went out.

Conditions on track were so severely compromised that times with this year’s car (and 50kW more power) were nearly 10 seconds slower than last year’s pole over just a 1.156 mile track. With water flooding the floor of tent garages, teams were working in extremely difficult conditions to continue the sessions at all.

Sam Bird set the first decently-paced lap of qualifying, with a 1’12.529 after neither Mahindra could breach 1’14 – however, Lucas di Grassi, last out in the session, was able to put together a 1’12.321 for a potential Super Pole place and the top of some not overly impressive times.

Mitch Evans seemed to be on promising form, as the first driver to set a hot lap and immediately getting into P3 but over a second and a half back from Di Grassi. Both Mortara and Lotterer put together very impressive laps, easily besting Evans and taking the top two times of the session so far.

Jean-Eric Vergne, who last year took pole here by sliding backwards over the line, almost repeated the feat. However, where he managed to save the lap and car last year, this time his much scrappier lap ended in hitting both the front and back of his car, causing damage that left it stranded on track and brought out a red flag. As he was unable to complete the Parc Ferme procedure for qualifying, his severely compromised time was then completely deleted to leave him at the back of the grid.

Another short burst of rain came down before group three, preventing any potential advantage being taken from a drying track. Felipe Massa, who made his first Super Pole session in Mexico, was the first driver in the group to go to 250kW and set a 1’12.570.

However, Oliver Rowland set the star time with a 1’12.140 – comfortably the fastest time so far and nearly four tenths ahead of his teammate Sebastien Buemi, who only managed a 1’12.529.

Group four took to the track in potentially one of the driest conditions it had achieved all day, although greasy would still be a mild description for the waterlogged tarmac.

Following Mortara’s impressive performance in group two, both HWA cars (powered by the Venturi powertrain) performed extremely well, with Gary Paffett making an initial bid for pole on a 1’12.093 only to be bested by Stoffel Vandoorne, who seized the best group time by miles with a 1’11.592 – nearly half a second ahead of anyone else.

Another burst of rain just before Super Pole revised any improvements during the final group session, sending a no-doubt-disgruntled Lucas di Grassi out onto a freshly wet track to an unsurprisingly non-stellar time.

Rowland bested his standout group performance to a 1’11.903 but Vandoorne once again proved unbeatable in the conditions, taking his debut Formula E pole by several tenths on a 1’11.580