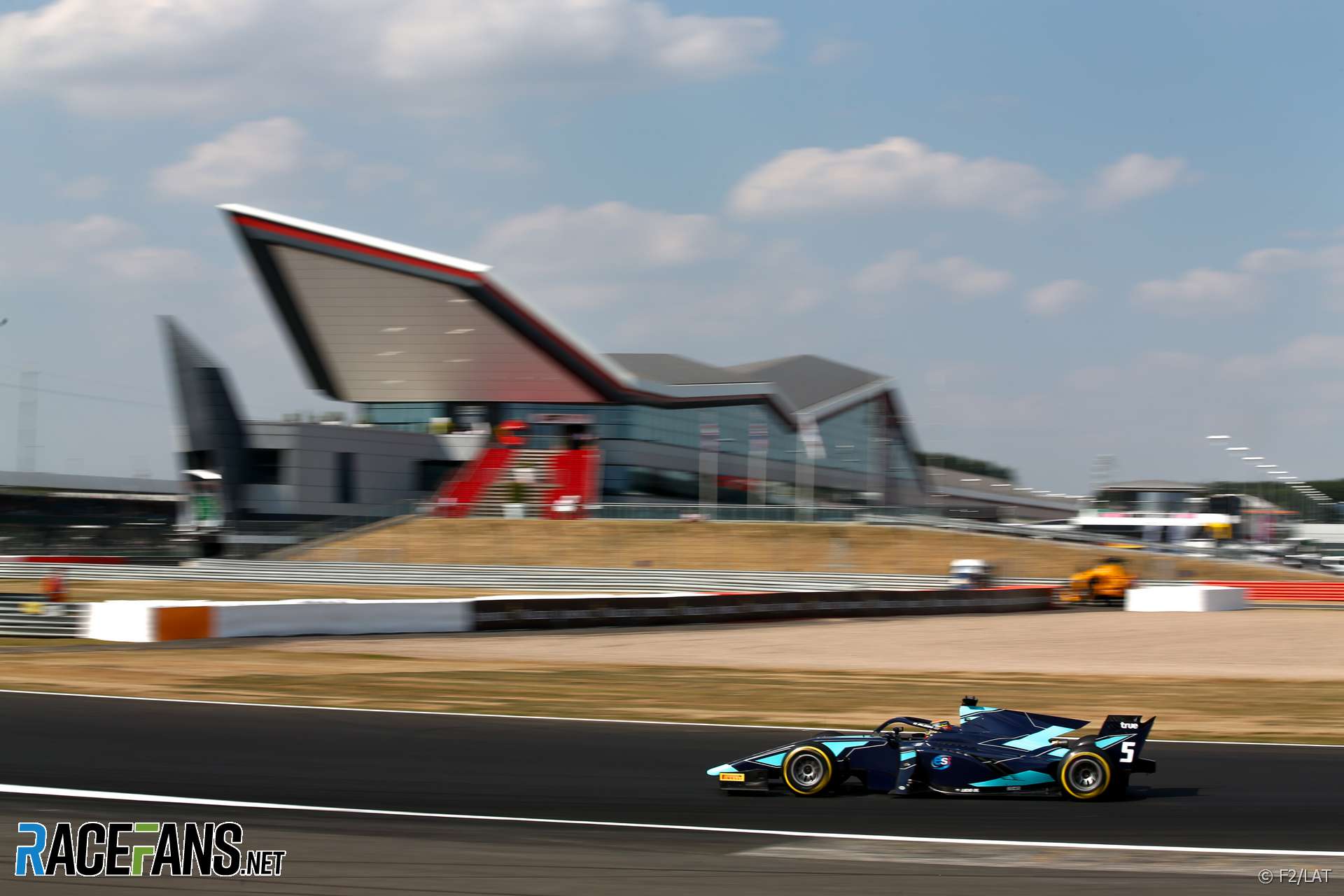 Russell looked set to take another win at his home round but a penalty-heavy, chaotic F2 feature race saw Albon take the top step instead.

F2 has seen a lot of changes this year, most recently the rolling start introduced in Austria last weekend to avoid dangerous stalling on the grid until clutch issues on this year’s car can be resolved.

Starting on a formation lap under the safety car has reduced some of the turn one incidents F2 and GP3 are prone to, as well as the risk that drivers have to avoid stranded cars but not decreased the amount of more generalised chaos during F2 races. Russell got a clean getaway the moment the safety car was in, starting on the soft compound tyres that every driver other than Tadasuke Makino and Ralph Boschung picked first, of the two mandatory compounds.

Russell had said before the race that the main barrier between himself and the win was “the tyres but only at the end” – with high degradation feared on this circuit, it was

Qualifying had already produced some upsets at Silverstone, with Neck de Vries outside the top ten for the first time this season and both Prema cars in the lower half for the first time since they entered F2. Equally, consistent pole-winner and home hero for this race Lando Norris only managed 6th place.

Further shake-ups seemed likely as third-place Fuoco said he had “no power” only halfway through the getaway lap but managed to hold onto his place.

Russell pulled away well, gaining half a second on second-place Albon every lap until the pit window for drivers on soft tyres opened on lap 6. With degradation high at Silverstone, all three lead drivers, Sette Camara, Aitken, Gunther, Latifi, Gelael, Ferrucci and Maini all immediately headed in, while the rest of the field chose to stay out a lap longer.

Or in Makino and Boschung’s cases, the only drivers not on the softer compound, a further 15 laps. Makino has had a frustrating start to F2, suffering a lot of the gremlins the new cars have thrown up but suddenly found himself in the lead of the feature race, post-pit stops, setting a fastest time of 1:44.241 on lap 10.

Pulling away from Boschung, he stretched out a nearly 10-second lead by lap 15, still well before either he or the Charouz racer would need to pit. However, fellow Honda junior Nirei Fukuzumi somewhat bit into that with a Virtual Safety Car after he stopped on track.

Meanwhile things had gone from non-ideal to awful for Lando Norris, whose pit stop had been so disastrous he’d ended up at the back of the pack – and imminently in a collision with Sean Gelael that saw the Indonesian spun out of the race entirely.

None of the home racers were having a particularly good day, however, with even dominant Russell working his way back up the order after pitting. His circumstances also took a turn for the worse, when along with fellow Brit Jack Aitken he was handed a 5 second penalty for pit lane speeding.

Trapped behind Boschung, the lead pitted cars were forced to watch Makino manage to extend his lead until lap 21, when a slow stop for him saw him re-emerge in 14th, well outside the points. Adding a 5 second penalty for VSC infringements, also faced by Roy Nissany, saw him further slip from a race he’d led for so long.

At the same time, enormous marbling on the hard compounds was making it clear Russell’s prediction about the tyre management end game deciding the race was right. Although Boschung managed to keep hold of fastest lap, the podium turned out much as it had started, except with Albon ahead of Russell.

Norris took a single point from the race, leaving Russell able to extend his championship lead to 27 points, an unthinkable amount after the McLaren junior had dominated up until last weekend. Russell now sits on 150 points to Norris’ 123.

Markelov was pushed down to fourth in the standings by Albon’s win, on only 102 to the Thai driver’s 114.

Reverse grid pole for the sprint race tomorrow goes to Maxi Gunther, with Nyck de Vries next to him on the front row.

One comment on “Albon snatches win in race shaped by penalties”