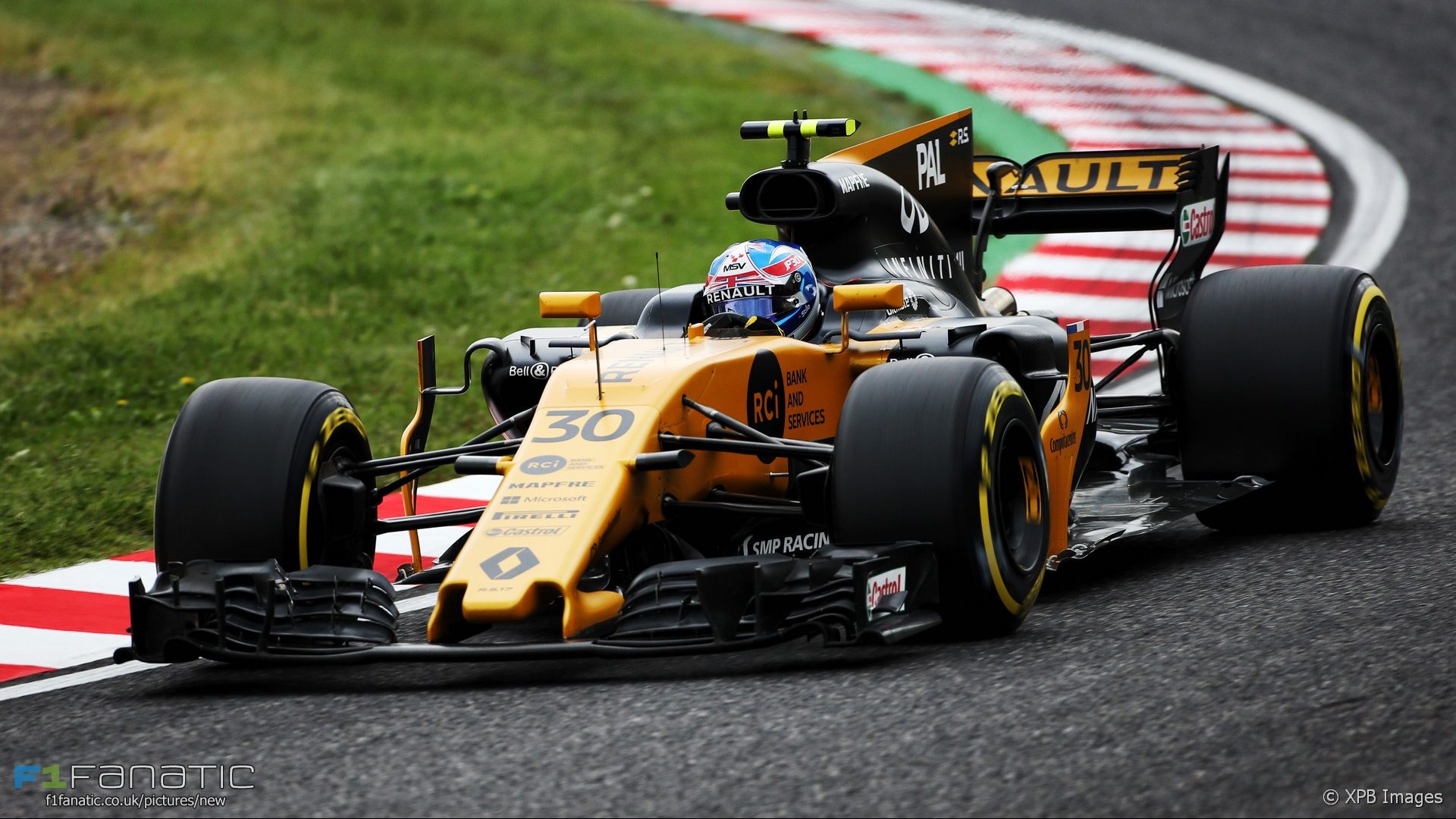 Jolyon Palmer thanked Renault after finishing 12th in his final race for the team at Suzuka.

Here are the team radio highlights from the Japanese Grand Prix.

Ferrari discovered a problem with a spark plug on Vettel’s car before the race began. The fault was still there on the formation lap, during which time teams are not allowed to communicate to their drivers.

“Puncture, rear-right. Stop the car, Carlos. Engine temperature rise. Stop the car.”
Sainz: “Yep, sorry guys.”
“Temperatures are decreasing. Is the car damaged?”
Sainz: “Yep, I’m really sorry guys. I just went for it, didn’t happen.”
“It’s OK Carlos. Shame to close the race like this. But anyway thank you for all this time.”

Vettel: “Power back on, correct?”
“Yes correct.”
Vettel: “I still have the same issue out of nine.”

To Verstappen: “If you can have a look at Hamilton then do so, Max.”

To Hulkenberg: “OK Nico so tyre pressures are all high. All four tyres on the high side.”

Esteban Ocon passed Daniel Ricciardo at the start but the Red Bull driver soon got back ahead.

To Ricciardo: “Nice job mate, let’s get stuck in.”

Hamilton: “Hoping he’s not out for too much longer because this is compromising my pace, my tyres.”
“Copy that Lewis, we are on it.”
Hamilton: “Struggling with my rears.”

Perez: “Guys can I attack Esteban? He’s just too slow.”
“No. Hold position.”
Perez: “He needs to pick up the pace. This is too slow.”

Nico Hulkenberg was forced to retire when his DRS failed.

Hulkenberg: “My DRS is stuck open. It doesn’t [censored by FOM] close.”
To Hulkenberg: “No tyre change, we’re just going to try to close the flap.”

Perez: “What Esteban is doing?”

Hamilton: “Got a vibration on these tyres.”
“Copy, we’ll have a look.”

Max Verstappen closed on Hamilton when they hit traffic in the final laps but wasn’t able to get past.

Verstappen: “Am I allowed to give it everything?”
“As long as you’re sensible.”

“Get in there Lewis boy. Beautiful work, Lovely managed race. That’s a fantastic result.”
Hamilton: “Got some vibrations on this in-lap.”
“OK copy so is that from PU or just tyres?”
Hamilton: “Yeah from the PU.”
“Copy, we’ll advise.”
Hamilton: “After I shift.”

Palmer: “Thank you mate. Thanks everyone. It’s been a pleasure.”

The full race radio transcript will be published later this week.