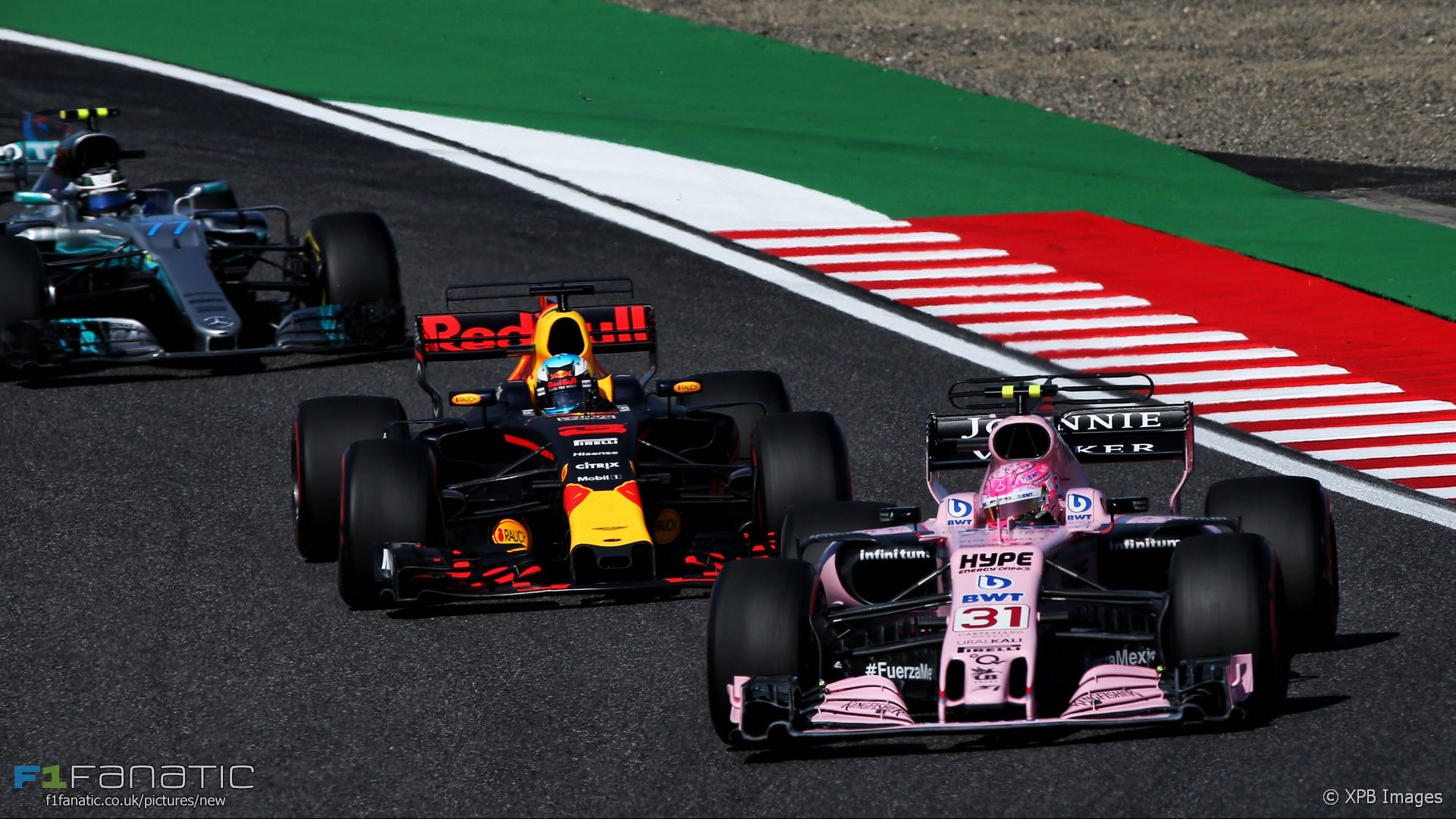 With a comfortable pole position – his first ever at Suzuka – and a commanding drive to victory, it’s impossible to overlook Hamilton. By his own admission he was a bit cautious on his out-lap, but Max Verstappen probably wouldn’t have had a sniff of victory if Fernando Alonso hadn’t kept Hamilton behind for so long.

The Red Bull pair went in very different directions on set-up. Verstappen had the draggier car, which hurt him on the straights, but the gap between them in qualifying was as near as makes no difference. Verstappen got the better start though, moving up to second, and after that was dogged in his pursuit of Hamilton.

Ocon put a cheeky move on Daniel Ricciardo at the start and held on to a place inside the podium positions until lap ten. Then he was inevitably passed in the DRS zone by Ricciardo and Valtteri Bottas, and Kimi Raikkonen jumped him through the pit stops, all of which he was powerless to do anything about. However he brought his car home in front of his team mate, something which clearly irked Sergio Perez as he started complaining Ocon was holding him up when he obviously wasn’t.

Romain Grosjean was potentially the faster of the two Haas drivers. But a crash on Saturday thwarted his qualifying effort and he followed Magnussen home in the race. The highlight of Magnussen’s grand prix – in fact, the highlight of the entire race – was his ballsy pass on Felipe Massa in turn two

The working Ferrari was wasted on Raikkonen at Suzuka. His gearbox penalty was self-inflicted by a crash in final practice. That also compromised his qualifying performance, leaving him seven-tenths of a second down on Sebastian Vettel. In the race he tangled with Stoffel Vandoorne at the start, then went off at Spoon while trying to pass Nico Hulkenberg. His performance contrasted sharply with Bottas, who had the same penalty yet qualified and raced well enough to take the chequered flag on Ricciardo’s tail, 20 seconds ahead of Raikonen.

Probably should have done better at a track he’s already raced at this year. He missed the cut for Q2 having been well down on Sainz and aggravated several rivals by holding them up. He spoiled his race by locking his tyres which forced him in for a second pit stop.

A poor start cost Ricciardo time behind Ocon, though he at least recorded his first podium finish at Suzuka. Bottas recovered well following his gearbox penalty and qualified better than he has done recently.

Massa slipped from eighth to tenth as tyre degradation problems hurt Williams. It was a wasted weekend for Lance Stroll, who was held up on both his flying runs in Q1 then suffered a puncture in the race.

Jolyon Palmer did a solid job in his final weekend for Renault, qualifying just a couple of tenths off Hulkenberg. His team mate ran a long first stint but his race was ruined by DRS failure.

With better luck, both of the McLaren drivers could have been in the points. Stoffel Vandoorne qualified well but lost ground when he tangled with Raikkonen at the start. Fernando Alonso came from the back of the grid to finish a few tenths away from scoring Honda’s first point at home since their return to F1.

Marcus Ericsson spoiled a decent qualifying performance by crashing, while Pascal Wehrlein had a lonely run at the back of the pack.

Vote for the driver who impressed you most last weekend and find out whether other F1 Fanatics share your view here: