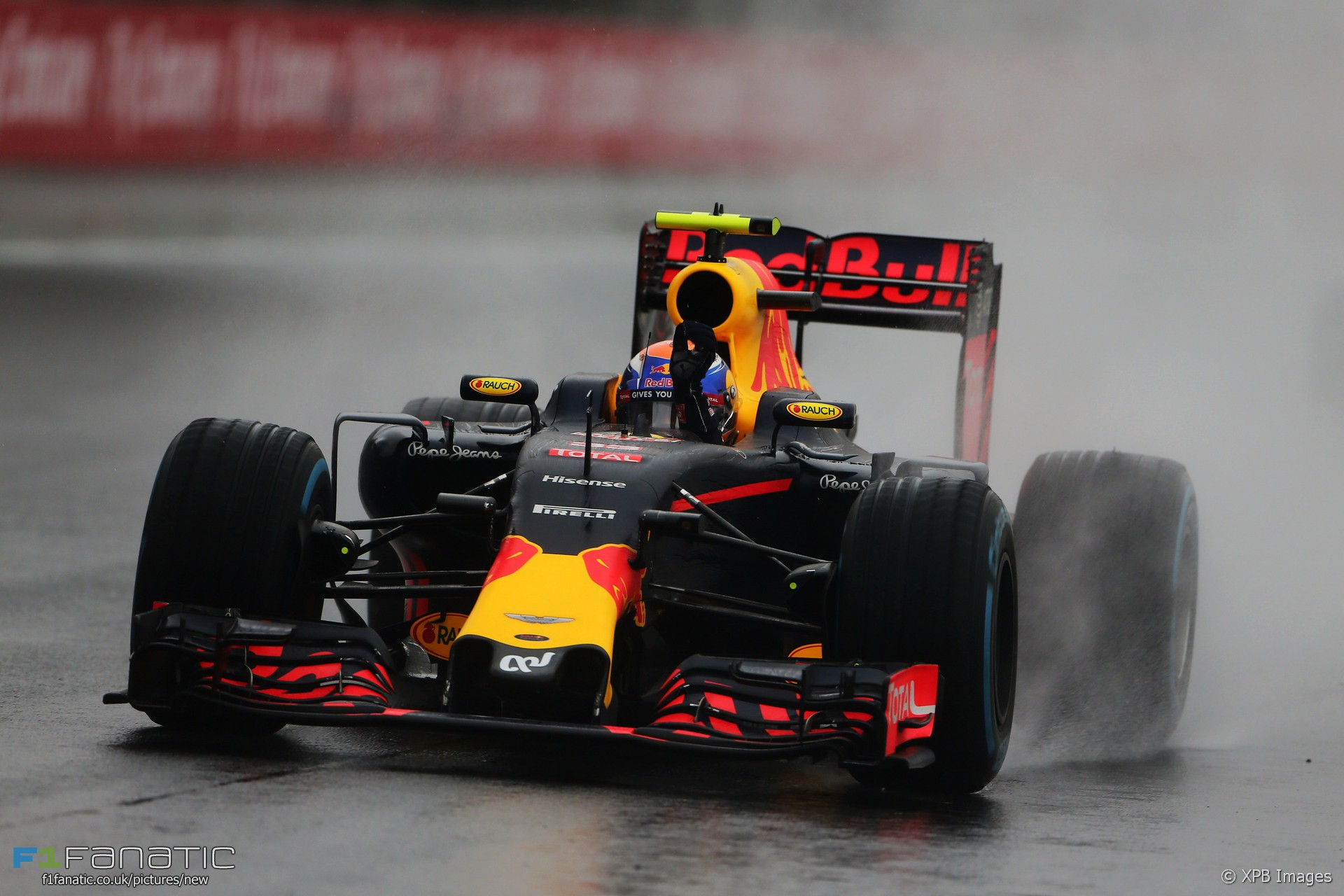 Max Verstappen took one of the most emphatic Driver of the Weekend victories this year following his scintillating Brazilian Grand Prix performance. His victory in Spain was the only time this year a driver has received a higher share of the vote.

A late charge through the field on a rain-soaked track saw the Red Bull driver rise from 16th to 3rd in just 14 laps.

Verstappen picked up 68% of the vote to top the poll for the third time this season. Race winner Lewis Hamilton was the only other driver to get a substantial number of votes, taking 16%.

Verstappen had the better of his team mate throughout the weekend but a slip-up on his final qualifying lap meant he was pipped to third on the grid by Kimi Raikkonen. But he soon made amends once the race got going on a soaked circuit.

The moment the safety car left the circuit Verstappen wasted no time in diving up the inside of Raikkonen at turn one. Job done, he began his race-long mission to overhaul the Mercedes drivers.

When Marcus Ericsson hit the wall on lap 13 Verstappen gambled on a switch to intermediate tyres, but this became irrelevant when the race was red-flagged and the field instructed to switch back to full wets.

After the ensuing Safety Cars and red flags Verstappen pounced again, this time pulling a brave move on the outside of Nico Rosberg at turn three. But he nearly threw his race away soon after as he tried to chase down Hamilton, narrowly avoiding contact with the barriers himself at the final corner with a well-held spin.

However a second gamble on intermediates again failed to pay off as the rain worsened. A further stop to refit the full wet tyres saw Verstappen slip to 16th.

This proved a prelude to a masterclass in wet weather racing as the Red Bull driver exploited used every millimetre of the circuit in pursuit of extra grip. He scythed past over half of the field in just 14 laps to reclaim his spot on the podium.

If all you’d seen of this race was the footage involving him, you’d still rate it higher than almost any other race of the season.

Out-qualified his team mate, and drove a fantastic race to third – even if the team made some questionable strategy calls that may have cost him second place.

Hamilton was flawless, and couldn’t have done better all weekend, but the drama of Verstappen’s race made him my Driver of the Weekend.
Beneboy (@Beneboy)

It takes a very special driver to manage to climb ten places in twelve laps (I think that’s right). And, of course, Verstappen is only 19 years old. Plus his recovery from that spin on the pit straight to somehow manage to hold onto second is one of the best moments of the season.
Jonathan Balsdon (@jb108822)

I cannot fault Hamilton’s race weekend, and he probably deserved Driver of the Weekend due to his dominance throughout the whole weekend.

But Verstappen was exciting to watch all race, and I had to go with heart over head and give him this one.

I, for one, hope he doesn’t change the way other drivers (Vettel especially) want him to. He is continuously finding new lines, new overtaking opportunities, new ways of driving. I love it, long may he continue to show the rest of the field how to put on a show!
drmouse (@drmouse)

Oh I am not a fan of Max Verstappen but today he was twice as good as anybody else. The way he found different lines through corners (especially turn three) made him unstoppable. He mastered Interlagos, he mastered the rain.

Red Bull and Verstappen made some questionable calls but it didn’t matter for him. He was still best of the rest.
Christopher (@chrischrill)

He found places on the track to use that nobody else was using. Before he passed Rosberg on the restart you could see him exploring different lines all around the track to see where he could make his moves. He tested a few of them coming alongside Rosberg while they were still under Safety Car. You just knew he was going to get Rosberg and he did.

Coming back from sixteenth to third was amazing to watch. Even passing his team mate on tires that were nearly as fresh as his. A memorable drive.
bull mello (@bullmello)

Verstappen stole the show, without a doubt that was one of the most exciting drives I’ve watched since Button at Canada 2011. And he nailed it in qualifying as well ahead of both teammate and a Ferrari. I’m not voting against him deserving the vote, but you can only pick one driver and for me that was Hamilton.

Solid qualifying, nailed the Safety Car restarts multiple times, had way more pace than his teammate and had Verstappen under control as well when he needed extra pace. It was a faultless drive without any moments, not featuring on the TV footage never helps with a driver of the week vote but I’m still giving it to Hamilton.
Philip (@philipgb)

Hamilton came to a track he has never won at, with the pressure of knowing that in all likelihood he had to win to keep his championship fight alive and completely nailed the weekend. He was flawless in the race and handled each red flag and restarted perfectly. Even on 30 lap old tyres at the end of the race he was still pulling away from the field.
Martin

Nasr was also amazing – bring arguably the slowest car to points in a home race is superb driving.
Robert_EST (@robert_est)

Perez gets my vote, him and Hamilton are the only drivers that I can not remember making any errors in the race but, unlike Hamilton, he did not have the massive advantage of a clear track in front of him. He achieved a good result and would have been on the podium if it wasn’t for Verstappen’s drive on much fresher tyres in a much better car.
Robert (@rob91)

2016 Driver of the Weekend winners

31 comments on “Verstappen dominates Brazil Driver of the Weekend”