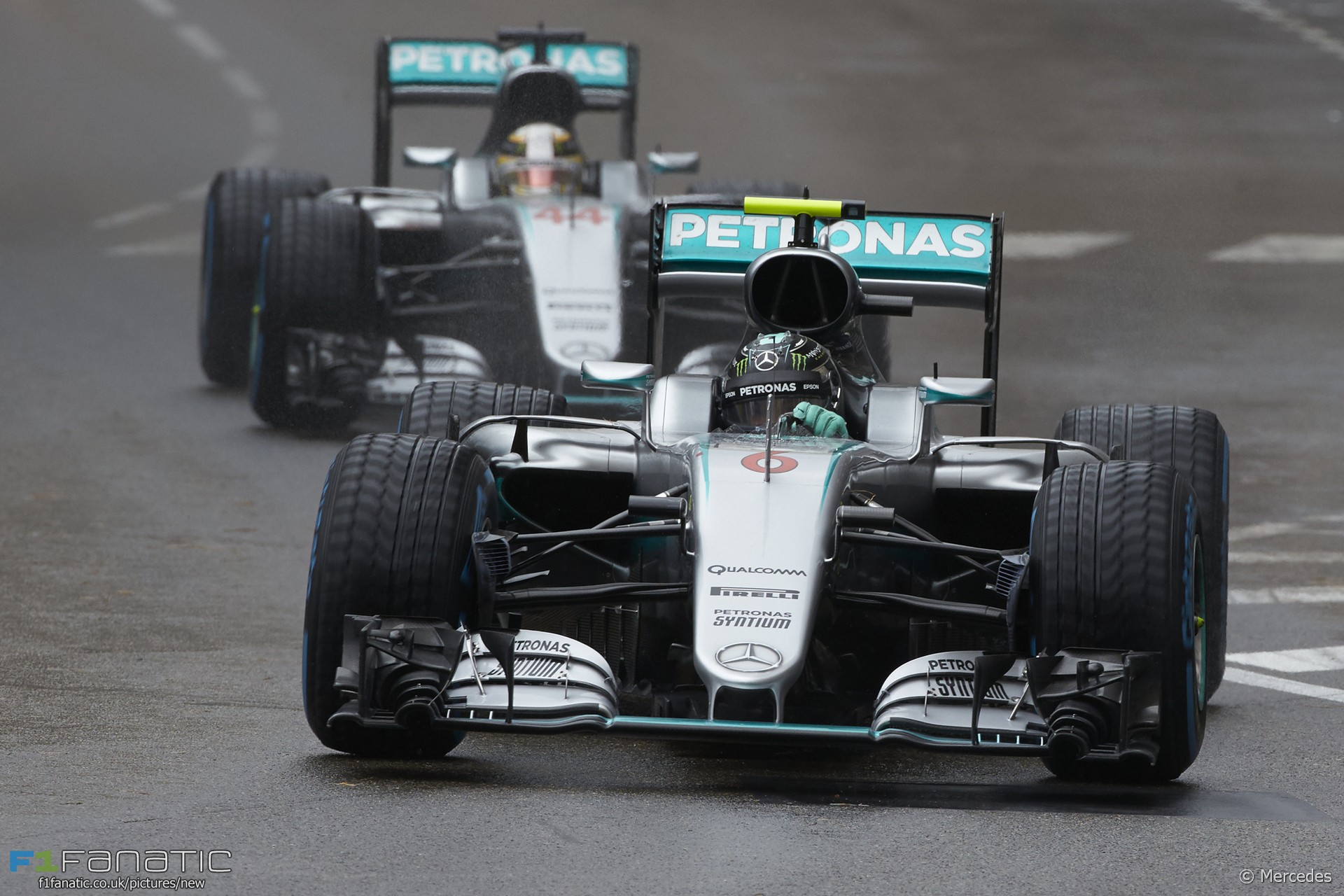 Of course a 43-point lead is far from insurmountable when there are 400 points available to be won. Hamilton of all people should appreciate this, having lost a 17-point championship lead with 20 available over the final two races of 2007.

While it’s easy to appreciate Hamilton’s disillusionment at failing to win a race up to that point, he might have taken some comfort from his points-scoring rate compared to team mate Nico Rosberg over the past two seasons. As noted here at the time, it gave every reason to believe Hamilton could catch up, lending real intrigue to a championship contest which was very one-sided last year.

Sure enough five races later Hamilton is now just one point behind his team mate:

As the graph shows, Hamilton has taken points off Rosberg at a slightly quicker rate than usual. After Spain Rosberg might have hoped he could cling to his points lead until the end of the season with a clutch of second places and his team mate’s inevitable upcoming engine penalties.

But Hamilton’s swift demolition of Rosberg’s margin has brutally exposed his team mate’s shortcomings, and left him looking desperate at times.

Spain was a no-score draw for the pair after Rosberg, slowing due to an error with his engine settings on the first lap, fought his team mate off with uncompromising resolve. It was a legal move, but a tough one to make against a team mate, and it contributed to both cars failing to score.

In Austria Rosberg overstepped the mark, provoking contact between the two cars again as Hamilton attempted to pass him on the final lap. This was more grist to the mill for those who believed he deliberately parked at Mirabeau in Monaco two years ago, and was aiming for Hamilton’s left-rear tyre at Spa later that same year.

It’s easy to overplay these occasional signs of desperation in Rosberg’s driving. What has been more revealing about the past few races is the number of times he has been found wanting on the track – particularly in the most challenging conditions.

On a wet track in Monaco Rosberg’s pace was so poor Mercedes invoked team orders to keep him from wrecking Hamilton’s race along with his own. In similar circumstances at Silverstone he slipped back from Hamilton and was humiliated by Max Verstappen who overtook him around the outside of Becketts – the most unlikely passing place on the entire circuit.

It was qualifying in Austria which best illustrated Rosberg’s tentativeness in the wet and his dependence on his team. While Nico Hulkenberg pounced on the opportunity to attack a damp track on slick tyres Rosberg could not have been more emphatic when asked if he wanted the same: “Negative, negative, negative” he replied. He was overruled, and while he ultimately lapped half a second off Hamilton’s pace his instinct to play it safe was revealing.

Rosberg’s latest setback came at Silverstone when his team, pressed by its driver for more information on how to handle a gearbox fault, broke the new-for-2016 regulations limiting the type of assistance drivers can receive on the radio. It came as little surprise to see Rosberg become the first to fall foul of the restrictions: what we heard of the teams’ radio messages before this year gave a strong impression Rosberg relied on them more than most.

It’s always been these telling inadequacies, rather than the few headline-grabbing controversies, which have made it hard to envisage Nico Rosberg as a world champion. The graph above makes it clear which driver accumulates points more rapidly over time as the effect of occasional technical problems is diluted.

Whenever Hamilton suffers such a misfortune the conspiracy theorists immediately proffer outlandish explanations for how Mercedes are favouring Rosberg. They should instead reflect that the best thing Mercedes could do to assure Hamilton’s continued success is re-sign the driver he has beaten on each of the five occasions they’ve shared a team for a season.

The run-up to Rosberg’s home race in Hockenheim next week would seem the perfect time to do just that.

109 comments on “Rosberg showing the strain as Hamilton closes in”