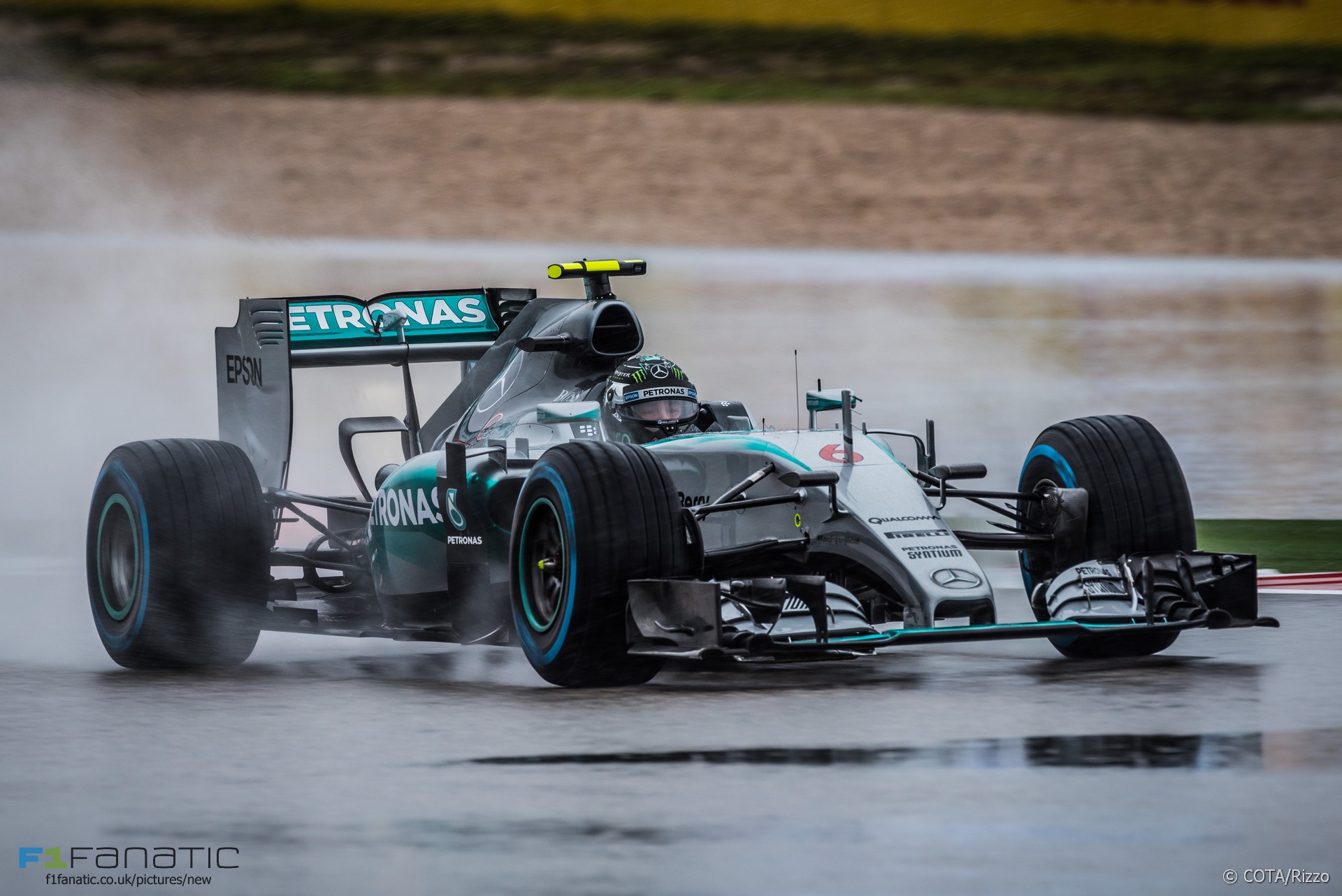 Nico Rosberg has taken pole position for the United States Grand Prix after bad weather forced the cancellation of Q3.

The session had been running for little more than five minutes when a crash brought out the red flags. Carlos Sainz Jnr suffered his second accident in as many weekends, albeit considerably less destructive than his Sochi smash, after spinning off at turn four.

Lewis Hamilton was on top of the times when the session was halted, and when the action resumed he began a three-way fight with his team mate and Daniel Ricciardo for the top time.

The weather forecasts were telling teams to expect the conditions would worsen, but times continued to improve until the end of Q1. And with the possibility that further rain could prevent further sessions from being run, the battle for the higher places counted just as much as who might avoid elimination.

The latter was seldom in doubt: the two Manors were rooted to the bottom of the times, ahead of Sainz’s crashed car, with the two Manors ahead missing out on progression by over a second. This was a relief for Sebastian Vettel, who ended the session 15th after touching a barrier.

Hamilton slipped from first to third at the end of the session as Ricciardo claimed the quickest time, the trio covered by less than four-tenths of a second.

The tack had improved slightly in time for the start of Q2 and this time it was the Mercedes drivers who led the way. Rosberg set a rapid time with his first run and although Hamilton got within a tenth of a second of it, this time he ended up behind his team mate after the rain increased in the middle of the session, preventing further improvements.

Ricciardo led the way for Red Bull again, this time with his team mate immediately behind. Both stayed out on the track longer than the Mercedes pair in the hope conditions would improve.

Fernando Alonso initially seemed to have secured progression to Q3 for McLaren, particularly after Valtteri Bottas failed to beat his time by a few hundredths of a second – the Williams driver later complaining of a suspension problem on his car,

However Max Verstappen narrowly beat the pair of them to the final Q3 spot. Jenson Button therefore joined team mate Alonso in elimination along with the two Lotus drivers.

As the track conditions worsened, several drivers spun off at turn ten and most got on the radio to complain about aquaplaning in the deeper patches of water.

With the weather taking a turn for the worse at the end of Q2, the Safety Car was sent onto the track to judge whether the conditions were good enough for the final part to go ahead.

As the weather worsened, the decision was taken to cancel Q3, and the times from Q2 will therefore count towards the final grid.

Rosberg therefore took pole position for the third race in a row ahead of Hamilton, Ricciardo and Kvyat. Vettel was fifth quickest, but a power unit penalty will move him back, promoting the Force India pair to the third row.

24 comments on “Rosberg on pole position as Q3 is abandoned”