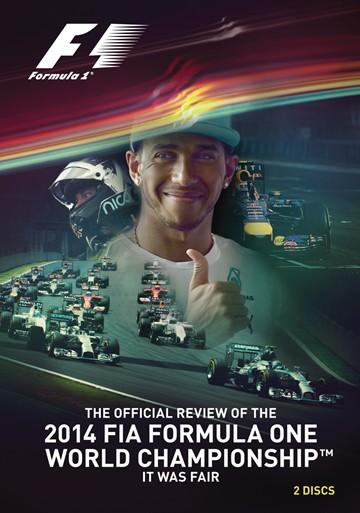 The official 2014 Formula One season review is a much better video than its bafflingly inadequate title “It was fair” might lead you to believe.

Unlike last year’s single-disc edition, the DVD version of the review is now spread across two discs, with the four-and-a-quarter hour review squeezed onto the first. The second contains over 40 minutes’ worth of extras.

Where these reviews once showed footage of the races and not much else, they are now much more comprehensive. The major technical changes at the start of the year are introduced, the pre-season build-up and testing is covered, and and highlights from practice and qualifying feature throughout.

A greater focus is given to the technical side of F1 than in previous reviews. This is a welcome development even though it’s a bit of a mixed success. The introduction to the new power units is lengthy and very dry.

Subsequent technical features, presented by Gary Anderson, don’t fit well within the review and would probably work better as DVD extras. As they appear to have been lifted from the F1 app they may already have been seen by some. At times the rigid chronology of the review gets in the way of the narrative. The story of the Red Bull fuel sensor row, for example, is broken up across several race weekends when it would work better told all at once from disqualification to appeal. It feels very much like the review was assembled in stages, with a block of highlights added to it after each race was finishes.

Ben Edwards does a fine job of narrating the review as usual, but the addition of Anderson to the commentary line-up brings welcome variety. The same goes for James Allen and Jennie Gow. But why is the sole female presenter only used to introduce the Monaco glamour segment? This feels decidedly patronising.

The dreadful events of Suzuka are covered in a careful and tasteful way. Although Formula One Management does possess footage of Jules Bianchi’s accident it’s not hard to understand why it does not consider this an appropriate way of releasing it, as they would not wish to be seen as profiting from his misfortune.

The sheer length of the review makes for a rather plodding pace at times. I’m not going to mark it down for being thorough, but I did find myself reaching for the fast-forward button occasionally, particularly during the coverage of the season’s more well-worn controversies.

So much material is broadcast during Formula One race weekends now that less and less new material appears in these end-of-season reviews. There are some interesting new radio titbits – including a particularly revealing one from Hamilton in Monaco – as well as the usual smattering of novel camera angles. Regrettably, the ugly virtual adverts which plague FOM’s coverage have been left in place.

Disappointingly it seems the tangle between Kimi Raikkonen and Max Chilton in Monaco was completely missed by FOM, so we’re still none the wiser how the Ferrari driver’s podium chances were ruined that day.

At times it feels like too much focus is being given to the championship battle between the two Mercedes drivers. The DVD extras addresses this to an extent, bringing more coverage of the rest of the field and some excellent multi-camera views from race starts.

However most fans will probably hang on for the Blu-Ray version, which is due for release soon featuring a further 20 minutes’ worth of added material.

“It was fair”: The Official Review of the 2014 FIA Formula One World Championship (DVD)

F1 Fanatic earns a commission on products sold via the links to our affiliate partners above, however you are not charged any extra. See here for more information.