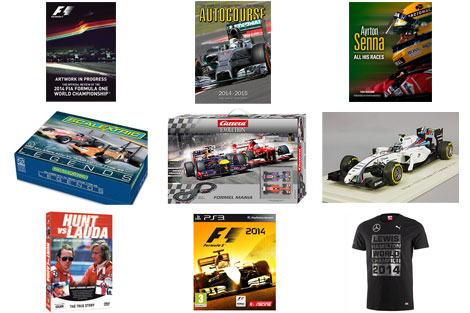 Need a gift for an F1 fan? The F1 Fanatic Gift Guide has over 100 suggestions – plus ‘Black Friday’ and ‘Cyber Monday’ discounts.

Support F1 Fanatic when you shop with Amazon

Whatever gifts you’re buying and whenever you’re buying them, if you’re shopping with Amazon please consider supporting F1 Fanatic when you do.

All purchases made via the search boxes below will contribute towards F1 Fanatic at no cost to you.

You can also find these search forms via:

Use this search form when shopping at Amazon UK (Amazon.co.uk):

Use this search form when shopping at Amazon USA (Amazon.com):

If you’re reading this website there’s a good chance you’ve already got a small library of these. The latest F1 season review video is due out on December 8th. It’s 280 minutes long so expect a review about five hours after the cellophane comes off…

Complete your collection with videos from earlier seasons.

Formula One fans have been very well-served at the cinema recently, but if you missed these when they were on the big screen they can bee picked up quite inexpensively now.

The superb Senna documentary is the pick of the bunch, though it has been around the longest. Rush is also highly recommended – Ron Howard’s story of the 1976 championship showdown between Niki Lauda and James Hunt raised the bar as far as dramatisations of motor racing are concerned.

The flawed 1: Life at the Limit is harder to recommend, but there’s enough new material and interesting interviews in it to keep an avid F1 fan distracted for two hours of the off-season.

Missed some of the top non-F1 action this year? Catch up with these 2014 championship review videos.

And if you can’t get enough of the 1976 F1 season, Hunt vs Lauda: The True Story covers some of the extraordinary moments which don’t appear in Rush.

Codemasters’ Formula One franchise is still going strong in its fifth year. The latest edition adds the Red Bull Ring and Sochi Autodrome, plus those dramatically different 2014 cars as well as all the current drivers and teams.

The Formula One world is not short of books about Ayrton Senna, and the twentieth anniversary of his death earlier this year was marked with the arrival of two more. However they were both very good – and “All His Races” stands among the very best.

These aside it was a fairly quiet year for new F1 literature, though reviews of some of the newer books below are on the way. Edited by Tony Dodgins with contributions from Maurice Hamilton and Mark Hughes, Autocourse is the definitive annual record of Formula One racing and the world of four-wheeled motorsport. It’s simply a must-have for any serious F1 fan.

Earlier editions of Autocourse fetch increasingly outrageous sums but you can now read them for yourself without forking over hundreds of pounds per book. The latest set of Autocourse eBooks includes the five volumes from 1961 to 1965 for £80.

Which books to buy – and leave on the shelf

F1 books tend to drop in price quickly once they’ve been around for 12 months, so if you’d like to learn more on a particular subject they’re a great idea for a stocking filler. But how to separate the dross from the good stuff? F1 Fanatic’s got you covered:

Buying any racing books from Veloce? Use the code Black50 on their website today to get special ‘Black Friday’ discounts. If you’re celebrating Lewis Hamilton and Mercedes’ world championship triumphs you can do so in style with their official shirts. The team are also having a ‘Black Friday’ sale – but you won’t find these new additions in there.

A great name from F1’s past is also bidding to make a return to motor racing – Brabham now have their own range of official team gear as well. You can buy tickets for races on the 2015 F1 calendar via the links below. Note the calendar is still subject to change.
If you have any questions about going to the race, do post them in the form for each race where other readers will be able to help.

NB. Tickets may not be available for all races yet.

Circuit of the Americas special deal

For those near the home of the United States Grand Prix, the Circuit of the Americas is running a special deal for a five-event ticket which includes general admission entry to their Formula One, World Endurance Championship and Moto GP races for $222 – around half the normal price of all five races. The deal is only available on ‘Cyber Monday’ (December 1st) via this link using the promotional code ‘Five’:

JDC Promotions are offering VIP hospitality packages for all the European Formula One tests next year. Keep an eye on how the new season is shaping up in style. Exact dates and prices are to be confirmed.

Scalextric released a brilliant new line of superbly detailed retro Formula One slot cars in 2014. Some of the greatest Formula One cars of the seventies feature among them, including the Lotus 72 and 49, McLaren M23 and Tyrrell 003. They can be bought as two-car sets or individually.

If you prefer something a bit more contemporary, you can pick up a ‘Black Friday’ deal on Romain Grosjean’s 2012 Lotus. If you want a slot car set which features Ferrari and Red Bull, look for Carrera’s Formula Mania.

And with McLarne reuniting with Honda what better time than to check out model specialists Tamiya’s superb new 1:20-scale version of the all-conquering 1988 McLaren-Honda MP4-4, which Ayrton Senna and Alain Prost won 15 out of 16 races with that year.

If you’d rather have something a bit less serious, the late cartoonist Jim Bamber’s creations are a real joy.

Are you buying or hoping to receive an F1 gift this year? And have you spotted any more ‘Black Friday’ or ‘Cyber Monday’ deals on F1 products? Let us know in the comments.

F1 Fanatic earns a commission on products sold via the links to our affiliate partners above, however you are not charged any extra.