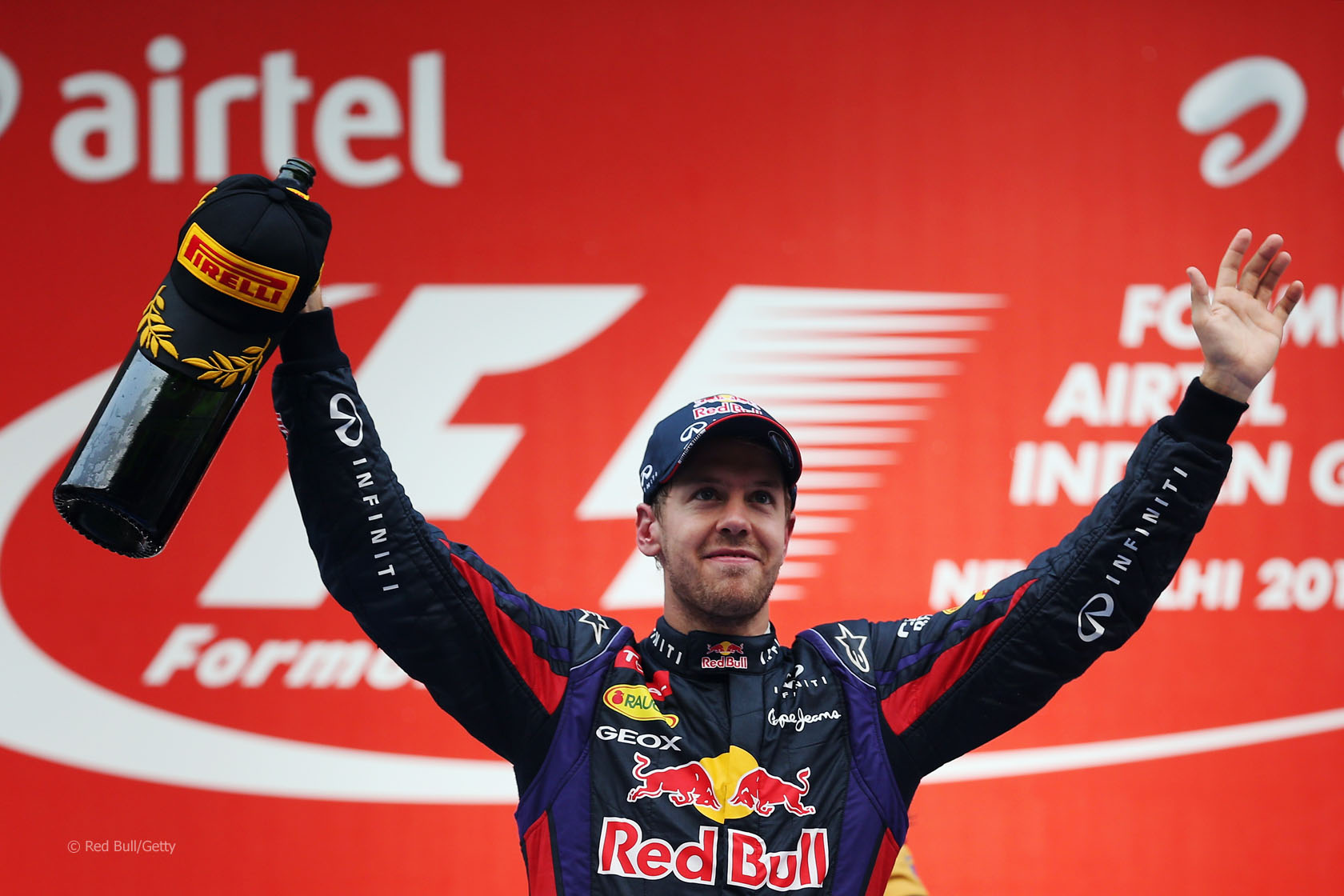 Sebastian Vettel topped the driver of the weekend poll for the fifth time following his Indian Grand Prix victory.

But though his margin of victory in the race was emphatic it was much narrower in the poll, as Romain Grosjean took almost as many votes.

Grosjean’s rise from 17th to third very nearly earned him a second consecutive Driver of the Weekend win while Sergio Perez was a distant third.

With Perez making his first appearance in the top three there are only five drivers left who are yet to do so this year.

Vettel’s qualifying efforts were just the start of his incredible crowning weekend. A lap time over seven tenths of a second clear of any other car showed how in-sync Vettel is with the Buddh International Circuit.

It was always his intention to pit immediately and at the end of lap two Vettel finally relinquished his one hundred percent lap leading record of the circuit.

Coming back out he was straight on the pace and just had to await the others to pit to take the lead back. He may have been made to work slightly harder had team mate Mark Webber not retired but the victory was rarely in doubt.

His incredible display of emotion shown at the end of the race undoubtedly also earned him more fans and probably a few votes as well.

This marks Vettel’s tenth appearance inside the top three this season although having taken his fourth title in a race he dominated, a top three showing was never in doubt.

for me it?óÔéĽÔäós pretty much a tie between Grosjean and Vettel. Qualifying is the tie-breaker in this case ?óÔéĽÔÇŁ driver of the race goes to Grosjean but driver of the weekend to Vettel.
TMF (@tmf42)

Vettel. Didn?óÔéĽÔäót put a wheel wrong all weekend. Rosberg and Perez did well too, but Vettel was just a class apart.
@Wsrgo

Demoted to 17th and overtook 13 cars in ten laps to come out in front again. After which, he just control the whole race and the pack behind him to take is 6th consecutive wins and 100% record in India with his fourth consecutive world championship.
@iAltair

Many expected Grosjean to challenge Red Bull at the front but failing to make it through Q1 was his undoing.

Whether he could have done so on the medium tyres, or whether the team should have sent him out on soft tyres, is a matter for debate. The tactic served him well in previous races but this time it may have consigned him to a 17th-placed start.

It was hard to see how Grosjean could recover but a somewhat obscure albeit brilliant drive – aided by Webber’s retirement – earned him his third podium finish in a row – something even he didn’t expect after claiming he “wouldn?óÔéĽÔäót have bet a penny on being on the podium”.

If this was driver of the race then it would definitely be Grosjean, 17th to 3rd is simply immense. He was only able to do that though because qualifying was totally ballsed up in the first place!

I literally had to toss a coin, and Grosjean won my vote
Lewis McMurray (@celicadion23)

Grosjean did a great job from the 17th he found himself in, not only making up 14 places but having to nurse his tyres around all grand prix to make his recovery strategy work.
Merv (@cyclonetog)

Sergio Perez was voted in the top three for the first time this season after a solid drive earned him his best results of the season.

Perez was ahead of more experienced team mate Jenson Button all weekend, and pulled off some exceptional overtaking moves – including a double overtake on Hamilton and Raikkonen – to finish fifth, less than five seconds off of the podium.

I voted for Perez. He had a good qualifying, well clear of Button and close to Alonso, and drove a clean race, showing strong pace throughout. He has shown good pace before, but he hadn?óÔéĽÔäót so far combined it with a clean weekend, and last weekend he did so at a time when his seat was under pressure.
@AdrianMorse

2013 Driver of the Weekend results

11 comments on “Vettel takes fifth Driver of the Weekend win”