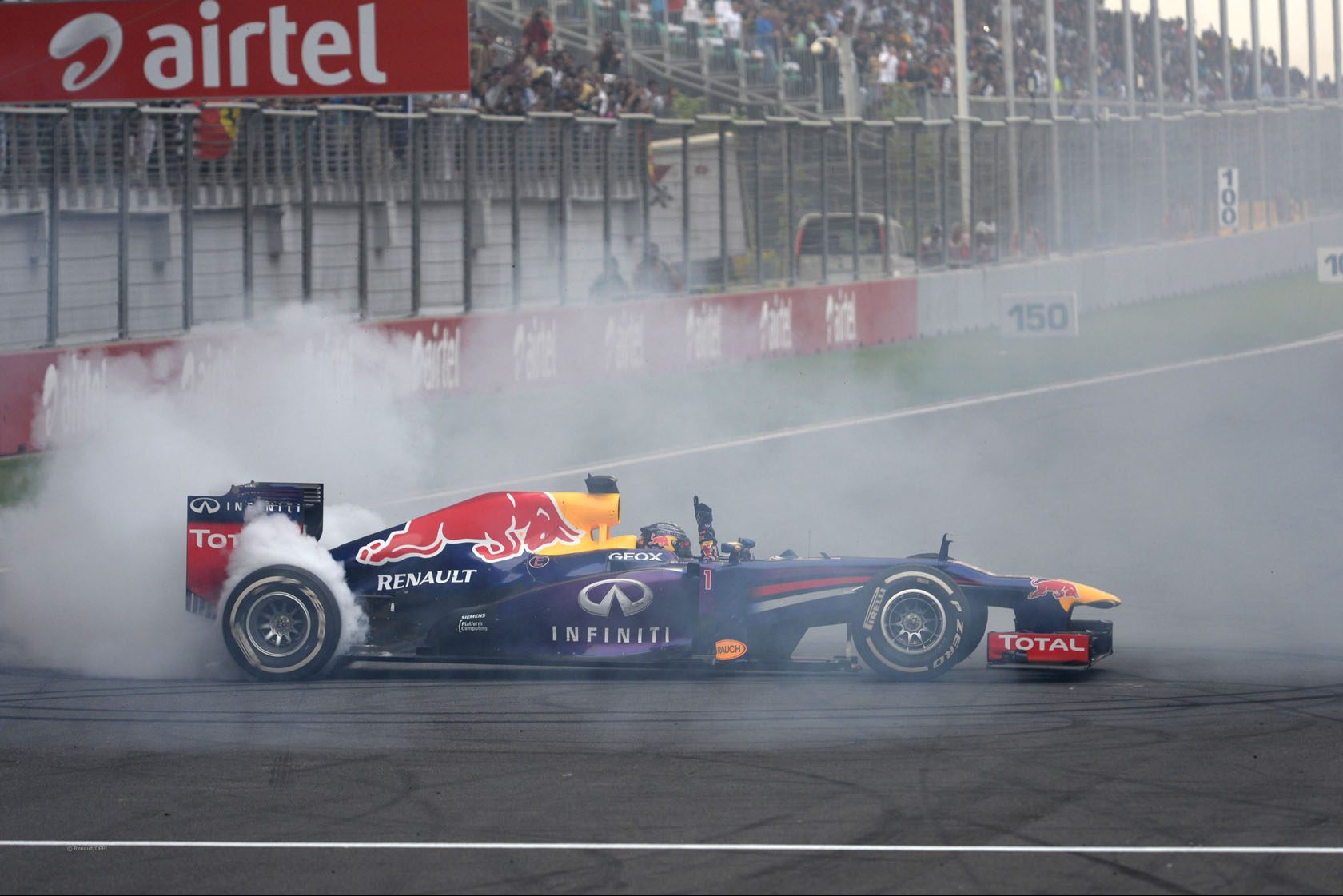 Ten of the best pictures which tell the story of the Indian Grand Prix weekend. There were plenty of places on the Buddh International Circuit where drivers can use the run-off but the long, looping turn ten and eleven isn’t one of them. Kimi Raikkonen got a little bit out of shape on his first run on the soft tyres during practice, but with quick reflexes kept the Lotus pointing in the right direction. Sebastian Vettel attends to his brakes with a cooling fan after taking the 43rd pole position of his career in India. While Vettel blasted off in his customary lead, Lewis Hamilton temporarily got ahead of Nico Rosberg. But a mistake at turn three left him vulnerable to his team mate and Felipe Massa took full advantage, passing both of them. Marussia and Caterham are locked in a tooth-and-nail scrap for the valuable tenth place in the constructors championship and for the second race in a row two of their drivers collided at the start.

Giedo van der Garde came off worst, as he also did in Japan, after tangling with Max Chilton and also making contact with Caterham team mate Charles Pic. Vettel began the weekend looking certain to wrap up the title and any last vestiges of doubt were all but extinguished when Fernando Alonso damaged his front wing on the first lap and had to pit. Adrian Sutil was the only driver to start on the medium tyres and make a single pit stop, switching to the unfavoured soft compound with 19 laps to go. In the meantime he kept Massa at bay, which compromised the Ferrari driver’s race. A defective radio meant Valtteri Bottas made his first pit stop later than planned. He briefly headed the two Mercedes drivers but both passed him, Hamilton elbowing the Williams aside on lap 15. Daniel Ricciardo salvaged a point for Toro Rosso after holding off Alonso in the dying stages. Behind him is Mark Webber, whose place at Red Bull will be taken by Ricciardo next year, and who dropped out on lap 40 with an alternator problem. Sebastian Vettel’s jubilant celebrations of his fourth consecutive world championship deserve more than one picture. Here he is treating the Indian crowd to some doughnuts. Cows are revered in the Hindu faith and after the race Vettel showed he held his all-conquering ‘bull’ in similar esteem by falling on his knees and giving praise to it.