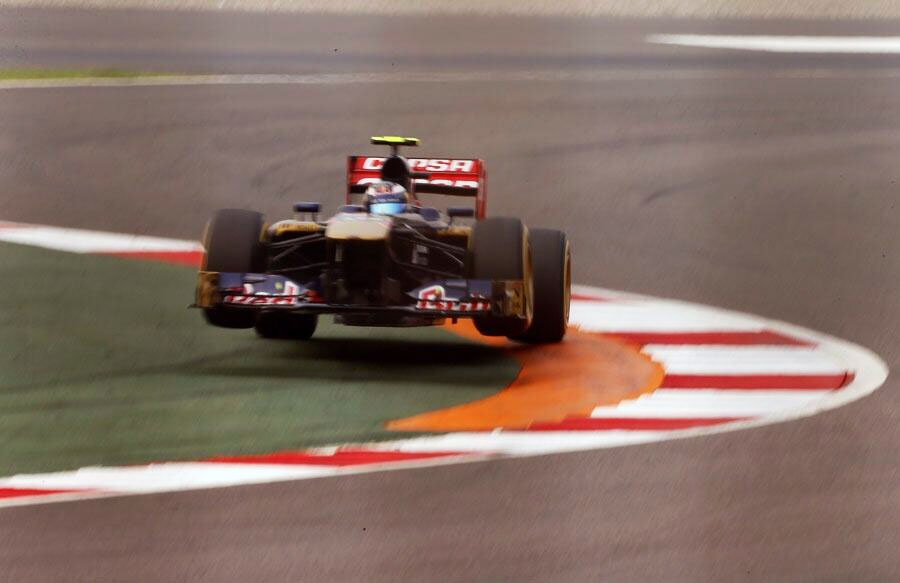 Get a glimpse behind the scenes of the Indian Grand Prix with @AnthonyFrench?óÔéĽÔäós round-up of the best Tweets from the race weekend.

Preparation for Sunday’s Grand Prix got underway on Thursday amid high anticipation about the likely conclusion of both championships – not that Sebastian Vettel and Red Bull were taking anything for granted.

Listening to bullpen interviews. Swear I heard the German anthem being played on PA system. Guess they're assuming they'll need it Sunday.

Not the kind of driving experience Mark was used to?óÔéĽ?Ş #tbt pic.twitter.com/gTWd2fnwz9

Engines covered for the night pic.twitter.com/tYwWPNk5kQ

Took some underprivileged kids in a bus to track & showed them around. great experience! #inspiration @laureussport pic.twitter.com/1ueysqh7VV

After long trip with some delayed flights, arrived at the track! Meetings, interviews and review of the GP 2012. Looking forward to drive!!

Vettel and Mark Webber immediately put to bed hopes that they would be caught in India by dominating the first two practice sessions.

Hamilton warns he's lost part of his front wing, he's told the contact doesn't seem to be a problem. Not sure what he hit. #F1

Seb?óÔéĽÔäós new helmet design for the #IndianGP highlights one of the main colours of a key material in #F1, Carbon Fiber. pic.twitter.com/2FIDKrIOV9

We appear to have stumbled in on Sergio's private test… sorry se?â??or! While we're here, anyone else fancy a go?! #FP1 #ChicaneTandoori #F1

Me and my bro @LewisHamilton 'Chillin' watching practice #FP1 pic.twitter.com/mgsfyyJKUt

Massa says he was held up. A sarcastic Smedley says: "He was very courteous, I think. Well done, big medal for him." #F1

Chilton asks: "What just happened? It jumped out of gear." His team are looking into it. Chilton suspects the problem is the driveshaft. #F1

As you may or may not know, the drivers have to go back out on track after laying rubber, it's not permitted at the end of a run #DelhiWelly

Joyce to Sutil: "I don't know what Hamilton's doing, he seemed to slow down every time we wanted a lap." #F1

Toto, I've a feeling we're not in Milton Keynes any more?óÔéĽ?Ş pic.twitter.com/fq8KE1hu0T

"Let's go to work" Checo gets ready for business in #FP2. #IndianGP pic.twitter.com/cZidtb0hdO

Vergne's engineer is mystified: "This is the same car as this morning… but it's clearly not the same." #F1

#socialfriday @The_Monties: "What's the funniest thing someone has ever left back in the UK?" We left @paddylowe behind in Korea once! Oops!

Rocquelin: "We think torque five would be better at this point." Vettel: "Negative. I don't like torque five." #F1

The Buddh Circuit may be popular with #F1 drivers, but it's truly terrible for photography. There's 1.3 Billion Indians. Just open the doors

Love the indian people however the Budhh circuit is a nightmare for photographers and the air pollution is shocking. #nolight #F1

Final practice was an all-Vettel affair again. Concerns over the life of the option tyre prompted a strategy rethink for some in qualifying, where Vettel took pole position and Romain Grosjean was surprisingly eliminated in Q1.

Good morning from the Buddh International Circuit, where it's shaping up to be another warm one today… #IndianGP pic.twitter.com/P1YMsOTIRn

This is the reason I had to end my session early yesterday… ???©?ŁÔÇí pic.twitter.com/ShH3zup0up

Getting ready for fp3 pic.twitter.com/kdkAB48w43

So #FP3 will be delayed by 15 minutes because of visibility problems.

The start of practice has been delayed by a further 15 minutes, leaving just half an hour of running available. #F1

And the Dastardly Vettel goes P1 on 1:25.332 on soft tyres #DelhiWelly

We are a close knit team, but that was a tiny bit too close. Our mechanic should be fine looks like it is just a bruise.

Quite a challenge for us photographers this morning out on the track. Very misty and hot… #IndianF1GP

Bonnington to Hamilton: "Magic diff available, it's the black button on the right-hand side." #F1

Grosjean: "I got traffic". Massa's knocked him out! #F1

Radio problems on Alonso's car mean we might not hear much from him in this session. Not that we usually get very much. #F1

Sebastian Vettel is on pole position again for the Indian Grand Prix! #F1

@peterobwright got Bronchitis now from the smog and poor quality of air everywhere, other than that it's been the worst event I have done.

Don't mind giving credit where credits due, Jules' lap was superb. I was happy with my first lap then didn't predict the change in grip.

In the end it was almost a perfect day for Red Bull: Vettel romped to victory and the championship, which also guaranteed their fourth constructors’ title, but Mark Webber retired at two-thirds distance.

Having breakfast, and found out I am on the front page of the Indian newspaper!! #F1 #IndianGP #giedoraces21 pic.twitter.com/hscvmyl2KA

Van der Garde was on the grass at the outside of turn two after contact with Chilton who he called an "idiot". #F1

So we're back to Japan spec, with @Charles_Pic1 chasing down BIA and CHI after a lap one visit to the pits…..

Alonso: "I think I damaged something more in the car because the steering is very heavy in the right corners." #F1

Webber told to press the reverse button once. "Think about rearward brake balance for turn 16 only". #F1

@mpandey69 Epitomises how F1 has consistently opted for the wrong solutions to its fundamental problems.

Rennie to Webber: "We have lost gearbox sync." He's out! #F1

Rocquelin to Vettel: "Sebastian some cars have stopped for [softs]. Don't even think about it, we've got enough problems as it is." #F1

Sebastian Vettel wins the Indian Grand Prix and is the 2013 world champion! #F1

Seb now hugging everyone and saying he loves them. It's like he's turned into your drunken best mate?óÔéĽ?Ş

Coulthard issues the standard @FIA buzz kill, telling Vettel he's not officially champion until the suits hand out the prizes on Paris. #F1

Congratulations to Sebastian for the championship! We will improve for next year ..! Now, max fight for second place and prepare the 2014!!

Congrats to Vettel and Redbull, Great Champion !! Hope next year we can fight them!!

Many Congratulations to Red Bull and Seb for another outstanding season brilliant achievement 4th World Championship in a row .

For ?óÔÇÜ?Ľ25000 fine Vettel donuts are an absolute bargain. So satisfying to do +images will define the season. A 10 place grid drop more fun ;))

Nice to finish this week in India with some points in front our shareholders, sponsors and fans. @clubforce done a mega job!

Great drive by Vettel, followed by a great celebration by a great driver. Awe-inspiring achievement at the age of 26

Championships won and my love affair with India has begun. Next stop Abu Dhabi… #BBCF1 pic.twitter.com/V0LgWqcgFX