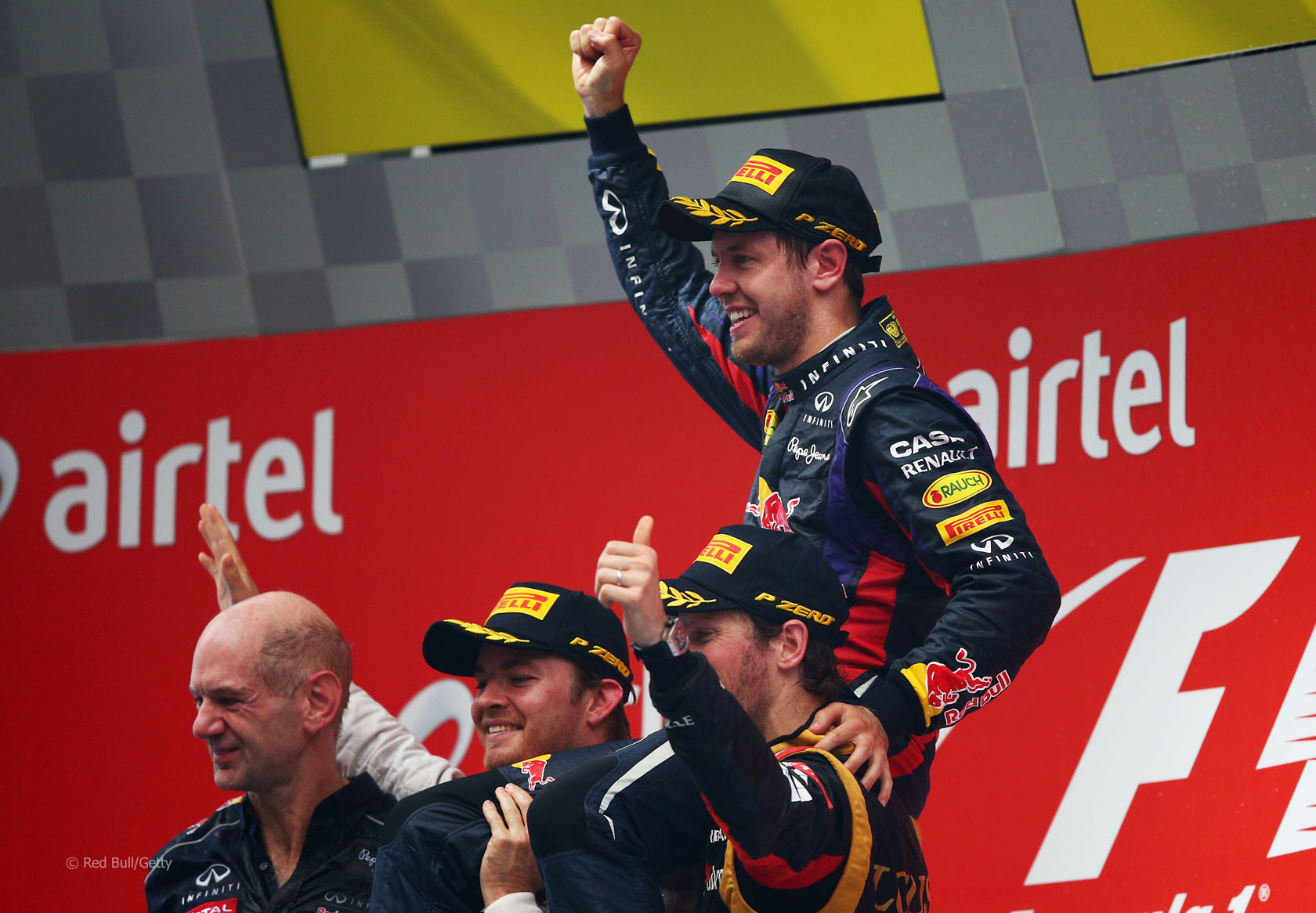 Yet despite that this wasn’t a very high-scoring round of the Predictions Championship. Two players shared the top score of 19 and Tamsin Shuker won the pole position tie breaker – impressively her predictions was just five thousandths of a second off Vettel’s actual time.

@Loup-Garou therefore took second ahead of @Mitchibob, who won another tie-breaker for third place.

Having lost the lead of the championship in the last round @Sebsronnie hit back in India, taking four points out of @Adaptalis. Even in this late stage in the championship there are still over 1,000 players who could take the top prize of tickets to next year’s British Grand Prix.

Here’s the details of what the top three players won in the Indian Grand Prix round:

Here are the predictions from the top-scoring players in this round:

F1 Fanatic has teamed up with Silverstone to offer one lucky winner the opportunity to revel in all the drama, glamour and exhilarating ‘live’ F1 experience with a pair of grandstand tickets for all three days of the 2014 British Grand Prix.

In addition, the winner will get behind the scenes at the post-race Grand Prix Party with a pair of backstage passes, providing the opportunity to get as close to the drivers as most fans ever will.

Supporting the thrilling on-track action will be a host of entertainment, including air displays, Entertainment Zones, free concerts and the post-race Grand Prix Party, guaranteeing an unforgettable three days at the Home of British Motor Racing.

You could win ?é?ú200 to spend on your choice of products from the incredible range of F1 memorabilia and F1 merchandise at mementoexclusives.com.

From race-used car parts to Formula One artwork, innovative F1 designer, furnishings and official F1 team merchandise, you will have no trouble finding items to spend your ?é?ú200 on!

The third place finisher will win one of Rob Ijbema’s vivid and colourful Formula One paintings.

The lucky winner will be able to choose which Formula One driver, present or past, will feature in their painting.

Alternatively they can pick one of the other motor racing paintings on Rob’s site which includes a huge selection of F1 imagery plus sports cars, rally cars and more:

The player with the highest score in each round will win this brilliant double prize from Codemasters.

The fourth instalment of Codemasters’ official Formula One game series features all the official cars and tracks from the 2013 F1 season.

But it packs in much more than that. For the first time Codemasters have added classic cars and tracks to their game. Five Ferraris are among the retro F1 cars on offer, including the 1976 312 T2 raced by Niki Lauda and featured in the new film Rush.

There are seven more classic cars on offer plus four former F1 grand prix tracks to race them on: Brands Hatch, Imola, Jerez and Estoril.

F1 2013 comes in two editions, but only the Classic Edition includes all the retro cars and tracks.

There will be no mistaking who’s won each round of the Predictions Championship as they will be wearing the same cap as the winner of the race.

Pirelli, the official tyre supplier of Formula One, will give the winner of each race a replica podium cap.

Pirelli will also provide the second and third-placed prize winners for each race with a set of their rubber wristbands.

This official Pirelli product identifies each of the six varieties of tyre used in Formula One: Super Soft, Soft, Medium, Hard, Intermediate and Rain.

The second-placed player in each race will win their choice of one of Duke Video’s Grand Prix Heroes DVDs.

Rules and how to enter

You have until the start of qualifying on Saturday to make your predictions for each round.

A reminder will be posted on the site after second practice on Friday as well as on the F1 Fanatic Twitter account and F1 Fanatic Facebook page.

To enter, predict the pole sitter and the top five finishers in the race. You can also enter a prediction for the pole position lap time – this may be used as a tie-breaker.

If you haven’t got one yet, the sign-up process is quick, simple and entirely free: Get your F1 Fanatic account here and read more about registering here.

After submitting your prediction you will receive an email confirming your entry. If this does not happen, or you are concerned your prediction has not been received, please get in touch using the contact form.

1. Maximum one entry per household.
2. The competition is not open to employees, friends or family of F1 Fanatic, Silverstone Circuit, Memento Exclusives, Car-a-Day, GP International, Codemasters, Pirelli or Duke Video.
3. Predictions will be promoted on the front page of F1 Fanatic before closing prior to the start of qualifying.
4. In each round players are invited to predict (a) who will be on pole position and (b) what the top five finishers will be (five different drivers) and will score points in each round as follows:
a. Correctly naming the pole sitter: 2 points
b. Correctly naming one/two/three/four/five driver/s who finish in the top five: 1/2/3/5/8 points
c. Correctly predicting where one/two/three/four/five driver/s finish: 2/6/14/24/40 points
5. Whoever scores the most points in every race counting towards the Formula One World Championship wins the grand prize.
6. In the event of a tie on points the winner will be determined by who is closest to predicting the pole position time correctly. If that fails to produce a winner the editor will choose a means of deciding who has won.
7. Predictions must be entered using the form above. If you have trouble submitting your entry via the form please contact F1 Fanatic via email and send your prediction using the contact form.
8. In the event of a dispute the editor?óÔéĽÔäós decision is final and no correspondence will be entered into.
9. No cash alternative is offered for any of the prizes.
10. Grand Prix tickets: Children must be accompanied by an adult. Accommodation and transport to the venue not included.
11. Players who have won prizes will be notified by email within seven days of each Grand Prix. Grand Prix tickets will be despatched once they are available.

Don’t miss a round of the Predictions Championship

Make sure you get your entry in every week.

Remember you can enter your predictions in advance and edit them up to the deadline.

To make sure you don’t miss an opportunity to enter, follow F1 Fanatic one of these ways: