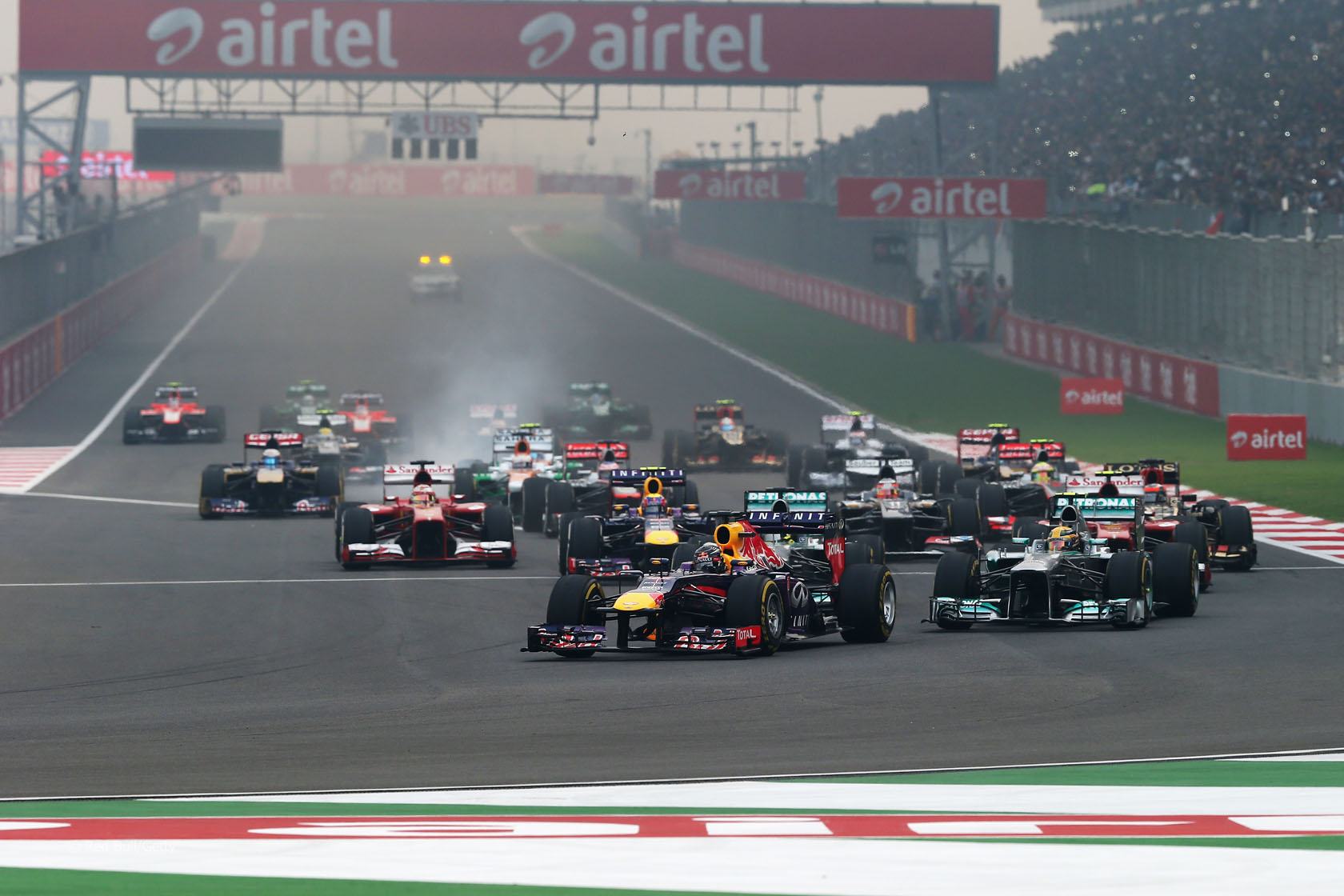 Which F1 driver was the best performer during the Indian Grand Prix weekend?

Review how each driver got on below and vote for who impressed you the most during the last race weekend. Sebastian Vettel – It never looked like anyone was going to keep Vettel from the win and his fourth title. He was over half a second quicker than Webber on the soft tyres and took pole by eight tenths from the Mercedes. Had to drop back into the pack early on to make his strategy work but brushed the traffic aside and was over 13 seconds ahead of his team mate when Webber retired. Picked up a reprimand for not stopping parc ferme after the chequered flag so he could perform doughnuts in front of the crowd.

Mark Webber – Did a solid job on the alternate strategy despite dropping three places at the start. Second place would have been his had his alternator not failed.

Fernando Alonso – Missed some running in first practice due to a gearbox problem. Qualified on medium tyres which left him eighth, though his Q2 time suggested a front-row start was possible. Tangled with Webber and Button on the first lap, leaving him with damage which forced a pit stop for a front wing change. From there he wasn’t quite able to make it back into the points.

Felipe Massa – Lost time in the second sector on his qualifying lap which he reckoned could have put him higher than fifth on the grid. Nonetheless a strong start saw him take second place early on. He wasn’t able to stay there, however, as he lost time behind Sutil and was jumped by Rosberg and Grosjean.

Jenson Button – Contact with Alonso on the first lap destroyed his race chances as he had to pit due to a puncture. He was disappointed to be so far out of contention on a day when the car was working well.

Sergio Perez – Did a long first stint on the medium tyres and ran second before making his obligatory stop for soft tyres. In the final stint he passed Hamilton and Raikkonen in one excellent move to seize fifth place – his best result so far for McLaren. Kimi Raikkonen – Troubled by his brakes early in the race, a brave attempt to run 53 laps on the soft tyres ended as they started to go off. His team were furious at the lengths he went to keep Grosjean behind, demanding he make way, which he eventually did. However he soon surrendered to the inevitable and made a late stop for more tyres.

Romain Grosjean – Tried to get through Q1 using only the harder tyres but paid a high price as he failed to make the cut. However with new tyres for the first stint he was better placed to make Lotus’s one-stop strategy work, and after getting past his team mate claimed an unlikely podium finish.

Nico Rosberg – Started and finished second, and was gratified to have a trouble-free race. Lost some time behind Massa early on but was able to get ahead of him via the pits, and was never likely to get within range of Vettel.

Lewis Hamilton – “I struggled a little bit with something different on the car this weekend which Nico had had experience of seeing maybe in the past,” said Hamilton after being out-qualified by his team mate. He passed Rosberg at the start, than ran wide at turn three and lost places to his team mate and Massa. He wasn’t able to get past the Ferrari, though it didn’t help matters that he made both his pit stops on the same lap as his rival. Hamilton’s tyres went off towards the end and he was passed by Perez.

Nico Hulkenberg – Eighth was certain, seventh was possible before a mystery floor problem ended his race seven laps from home.

Esteban Gutierrez – Failed to build on his recent progress with a poor weekend: a second slower than Hulkenberg in qualifying, he then jumped the start which led to a drive-through and eventually finished a disappointing 15th. Paul di Resta – Believed he could have found the missing few tenths needed to reach Q3. Pitted after just one lap to remove the soft tyres, then worked his way up to eighth for his first points since his home race.

Adrian Sutil – The only driver to run a one-stop strategy which began with a stint on medium tyres. He stayed out until lap 41, then nursed his soft tyres for an impressive 19 laps while keeping clear of Ricciardo.

Pastor Maldonado – An encouraging race for Williams as Maldonado crossed the line less than three seconds behind the points scorers. “The car showed better race pace which is encouraging,” he said.

Valtteri Bottas – Out-qualified Maldonado but his race was spoiled by radio problems which delayed his first pit stop. That left him in traffic, blunting his attempts to get into the points. Jean-Eric Vergne – Ran a similar strategy to Di Resta but only finished one place higher than he started. “We were just too slow,” he said and the team agreed with him, urging him to raise his pace at one point.

Daniel Ricciardo – Took the final point and was trying to pass Force Indias but had to keep an eye out for attacks from Alonso’s wounded Ferrari.

Charles Pic – Joined his team mate in retirement when he lost hydraulic pressure.

Giedo van der Garde – Blamed Chilton for his second race-ending contact on lap one in as many races. “It?óÔéĽÔäós been made really clear to us that we have to give each other room,” he said, “but today I wasn?óÔéĽÔäót given any at all and that?óÔéĽÔäós what?óÔéĽÔäós finished my race before it really got going.” The stewards declined to intervene, which given Van der Garde’s retirement indicates they did not hold Chilton responsible.

Jules Bianchi – A fine performance in qualifying got him ahead of both Caterhams as well as his team mate. But a problem at Bianchi’s first pit stop dropped him behind Chilton, where he finished.

Max Chilton – Continued his 100% race finishing streak despite the contact with Van der Garde on the first lap, which he unsurprisingly had a different view of: “From the video, the circumstances of the first corner seem pretty clear – I was ahead of van der Garde and he hit both Pic and myself with his front wing.”

Which driver do you think did the best job this weekend?

Cast your vote below and explain your choice in the comments.

Who was the best driver of the 2013 Indian Grand Prix weekend?

An F1 Fanatic account is required in order to vote. If you do not have one, register an account here or read more about registering here.