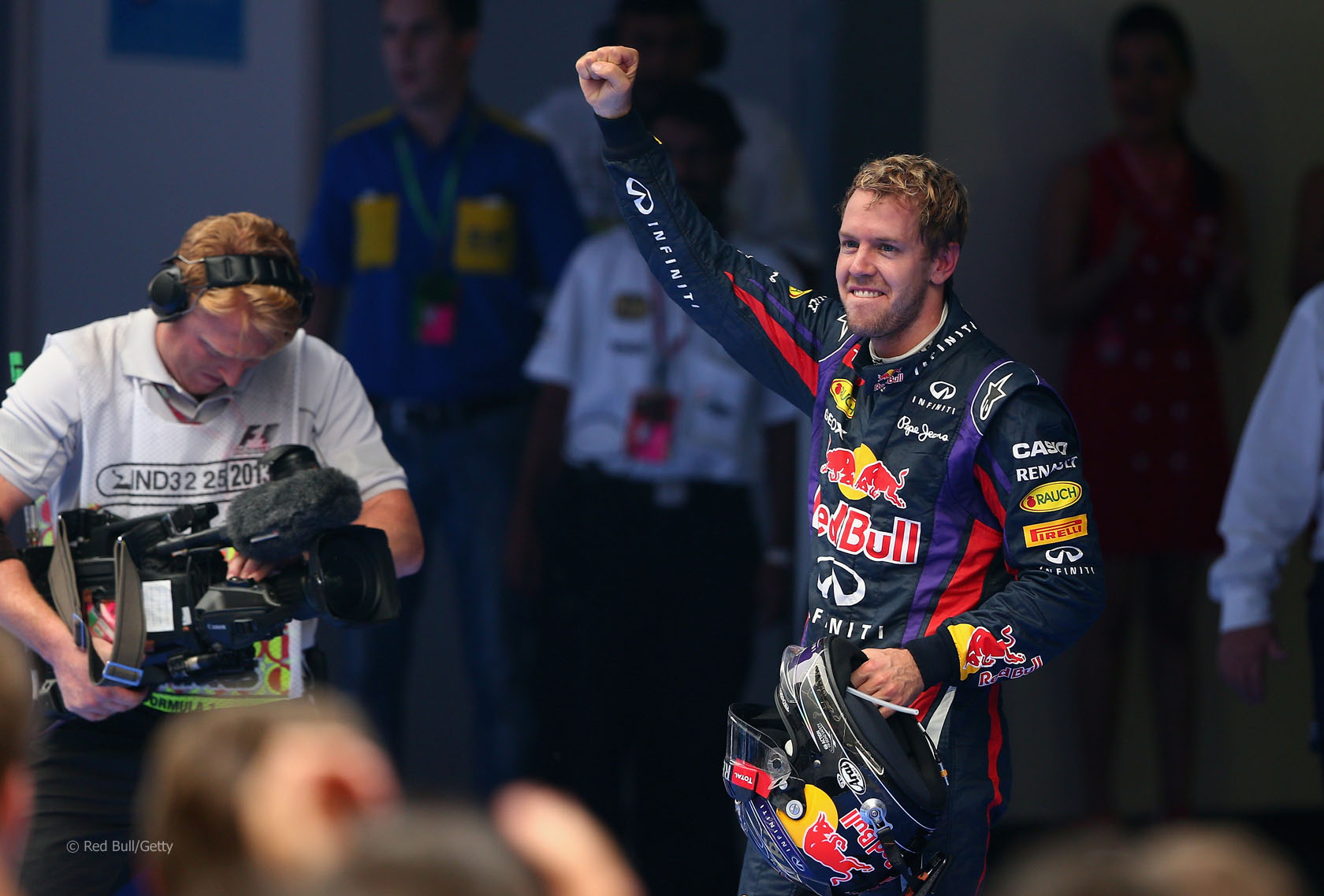 Sebastian Vettel says he finds it difficult to comprehend the comparisons made between him and the other all-time great drivers of the sport.

Vettel’s fourth world championship title puts him in very select company: only four drivers in F1 history have managed to win so many titles.

“It?óÔéĽÔäós very difficult to understand,” said Vettel after the race.

“Put it this way, I was watching TV, I was watching Formula One when Fernando [Alonso] started to win races and now I?óÔéĽÔäóm racing Fernando, he?óÔéĽÔäós been my toughest opponent for the last couple of years.

“To win four titles, I don?óÔéĽÔäót know, it?óÔéĽÔäós just a big number, you know? Four titles. [Juan Manuel] Fangio put the number of five titles, everybody appreciated him as the best driver in the world.

“He had some tough challenges coming in and going out: people like [Juan Pablo] Montoya, David [Coulthard], Kimi, Fernando. It?óÔéĽÔäós incredible that one guy managed to actually score more championships than this guy did.

“Unfortunately Fangio passed away but when you speak to true legends of the sport, in my opinion, like Stirling Moss, they actually have the guts to say that… fuck, this guy was better than me, he deserved to win and Stirling Moss for sure was not a… he finished twice I don?óÔéĽÔäót know how many times, three/four times in the championship?

“To join people like that: Michael, Fangio, Prost is very difficult to put into perspective. I?óÔéĽÔäóm way too young to understand what it means. I might be sixty one day, maybe then I will understand but nobody cares any more. I care, it?óÔéĽÔäós difficult to realise something that nobody can take away from you, basically.”

“They boo because they are Ferrari fans” Vettel’s efforts have not been appreciated by everyone this year, notably at some races where his victories have been greeted by booing from some people, most recently in Singapore.

“I had actually one guy writing a letter after Singapore,” said Vettel. “He apologised because he was in the crowd and he was booing and he apologised that he was booing, it was the wrong thing to do.”

“I think if people think about it they understand but in the heat of the moment, you know, there?óÔéĽÔäós nobody really to blame. Somebody starts, some people join in, others don?óÔéĽÔäót.

“We are fans of the sport and if some people have a passion for Ferrari, which they might have for good reason, they?óÔéĽÔäóve been around for quite a while, they don?óÔéĽÔäót like it if somebody else wins. It?óÔéĽÔäós not necessarily my fault. I think I?óÔéĽÔäóm mature enough to understand that.”

“I don?óÔéĽÔäót blame people,” Vettel added. “They boo because they are Ferrari fans.”

“At the time it hurts, as I said, not to get the reception that you expect but at the same time, I think I?óÔéĽÔäóm clever enough to understand why they do it. I?óÔéĽÔäóm not blaming them. Maybe if I would be a fan of McLaren, Ferrari, whatever, one of the traditional teams, I wouldn?óÔéĽÔäót like it if the same kind of guys, same team wins again and again.”

Vettel said it matters more to him to gain the respect of his peers: “I think the most important thing for me is to get the respect from people that I know and people that I race against. I feel respected amongst the drivers.

“Sure you have to fight to get that respect when you come in but I?óÔéĽÔäóm not blaming the fans. It?óÔéĽÔäós very difficult for the fans, to be honest, to understand what?óÔéĽÔäós going on behind the scenes because they get a little of an idea of who we are but it?óÔéĽÔäós impossible for everyone to introduce yourself and to explain what kind of guy you are.

“But then again, it?óÔéĽÔäós nice to give a little bit back to people you meet, at the hotel, at the track, outside of the track, maybe when you?óÔéĽÔäóre shopping, people that recognise you. Therefore, I think it?óÔéĽÔäós important that you get the respect from people that you really know. Others, I think, will always struggle, there will always be pros and cons, speaking for and against you.”

40 comments on “Vettel humbled by comparisons to all-time greats”