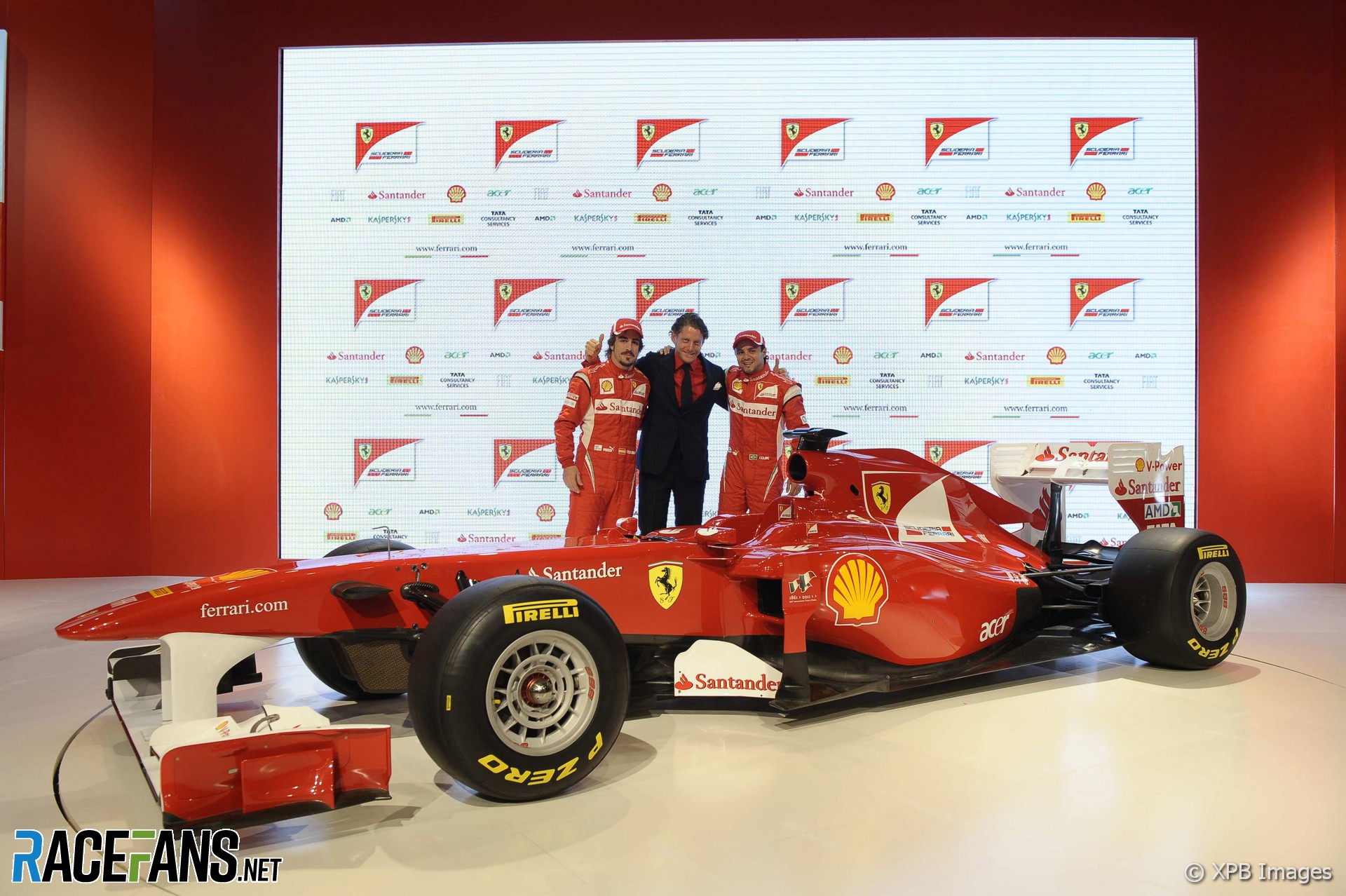 Ferrari have launched their 2011 F1 car at their base in Maranello.

The car was launched with several 2010 aerodynamic parts visible including the front and rear wings.

Chief designer Nikolas Tombazis explained some of the key changes and design features on the new car:

This car had to be reviewed hugely due to the new regulations.

The front part is similar to the one from last year but we will introduce some changes during our tests.

As you can see the front part of the chassis has been raised and the suspension, too, we have studied the lower part in order to improve the flow underneath the car which is very important for performance.

And due to the raiding of the frame the driver will be sitting in a higher position and you can see also the engine snorkel is a bit higher in order to have the same performance.

If you look back on the sides you have stronger indentation in the lower part and in the central part you can see that. We have introduced KERS in the area of the fuel tank.

If we go back a little bit more we have different behaviour in terms of the diffuser. We have tried to improve this structure in aerodynamic terms so the diffuser is completely reviewed in the light of the new regulations. It’s lower, it’s far simpler because the regulations are stricter.

And obviously we have this mobile rear flap. This is the first evolution and main target is controlling the operations of it, there will be strong development in that.
Nikolas Tombazis

Ferrari gave further details about the design of the car:

At first glance, the front part of the F150 monocoque appears to be higher than that of the F10. The openings for the side air intakes are reduced in size, while the layout of the dynamic one above the driver’s head has been modified.

The rear suspension features a new design, while that at the front has been modified, following changes to the front part of the chassis. The exhaust system layout is similar to that adopted for the second half of last season and the cooling system has had to take into account the return of KERS and the new air exit ducts.

The braking system has been completely redesigned in collaboration with Brembo.

As the freeze on engine performance development is still ongoing, there have been no actual modifications to the 056 engine, but that does not mean Ferrari’s engine specialists have been idle. Work has gone into improving reliability, working especially on the pneumatic front, as well as on reducing costs.

Furthermore, the reintroduction of KERS has led to a substantial change in the architecture of the front end of the engine, with modifications to the drive shaft system of the KERS itself and the crankshaft and this has led to changes to the cooling and lubrication systems.

The kinetic energy recovery system, designed by Ferrari, has been produced in conjunction with MTS and Magneti Marelli and was fine tuned based on experience acquired in 2009, with the aim of reducing its size and weight, while maintaining, in accordance with the regulations, the maximum use-able power and its usage cycle over one lap. This is another area where great attention has been paid to cost reduction, both in terms of its development and the way it is run, so as to make the system equally viable for our customer teams, Sauber and Toro Rosso.

The positioning of the KERS within the fuel cell was a further impetus to look at solutions aimed at reducing fuel consumption: in this area, the contribution from a key partner in the form of Shell was vital and will continue to be so throughout the season.

They confirmed they have not followed the lead of Red Bull by using pull-rod suspension: the F150 retains a push-rod configuration.