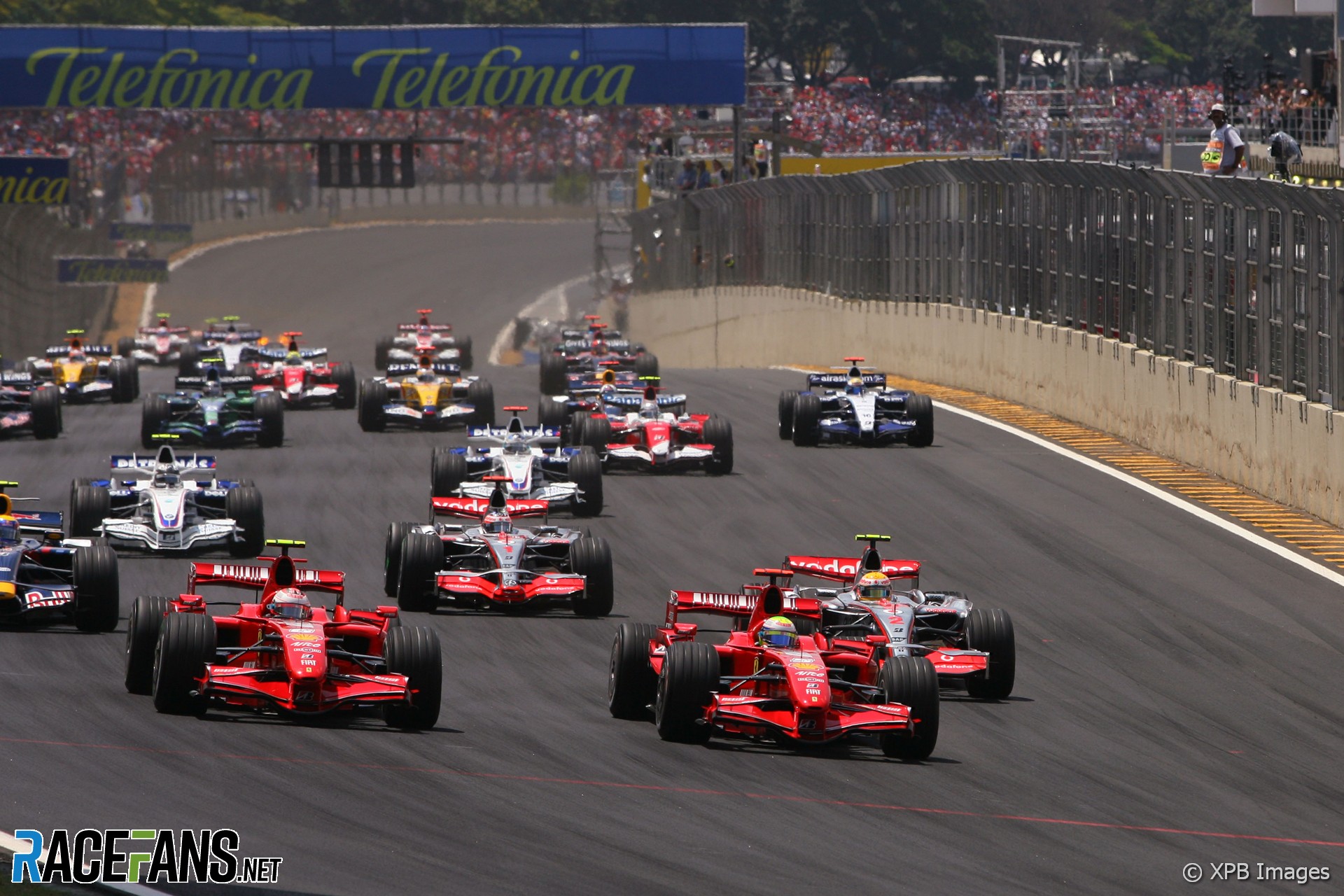 A car failure for Lewis Hamilton gave Kimi Raikkonen the opportunity to finally win the F1 championship in a dramatic finale at Interlagos.

While Hamilton battled in vain to fight through the field Raikkonen won the race to snatch the title by a single point.

Felipe Massa sacrificed a potential second win at his home race to make his team mate champion and finished second ahead of Fernando Alonso.

The pressure was on and the heat was terrific. Before the race two subjects dominated the discussions – the championship, and tyres.

With track temperatures hitting 63C as the race started, and a new track surface smoothing over the bumps of Interlagos and cutting lap times, tyre wear was forecast to be critical – especially on the softer of the two compounds.

The start could not have gone much better for Hamilton’s title rivals – Raikkonen blasted past him on the run to the first corner, then twitched wide, slowing the Briton down. Alonso seized his chance, and dived into third at turn three.

Hamilton tried to respond but was caught out when Alonso got on the brakes – he ran disastrously wide at turn four and fell to eighth behind Robert Kubica, Nick Heidfeld and Jarno Trulli.

Hamilton quickly got stuck into his rivals, zapping past Trulli on lap two, then taking Heidfeld around the outside of turn one on lap seven.

But then there came even better news for Raikkonen and Alonso – Hamilton slowed, and for a moment looked as though he would retire. But suddenly the car burst back into life, and he continued – in 18th place.

This place Raikkonen in the pound seats for the championship – ready to take over the lead from Massa.

What Hamilton needed was the appearance of the safety car but good work by the marshals was conspiring against him. They cleared away the mess from the collision between Giancarlo Fisichella and Sakon Yamamoto under waved yellow flags.

Hamilton began his fight back, quickly catching a four-car gaggle of Takuma Sato, Kazuki Nakajima, Anthony Davidson and Ralf Schumacher. By lap 17 he’d taken them all and was up to 11th.

The top three stayed the same but Robert Kubica took Mark Webber for fourth. Massa was the first to pit on lap 20, followed by Alonso on the next lap. Raikkonen also stopped before Hamilton came in on lap 21.

McLaren took the opportunity to gamble on Hamilton’s strategy, switching him to the super-soft compound tyres. It gave him the impetus to continue his attack on the cars in front of him – no more so than when he dived past Barrichello from an enormous distance at turn one.

Further ahead Alonso was dropping back from the leaders and suddenly had Kubica all over him. The Pole lined him up at turn one and took third off him on lap 32. Kubica, however, was on a three-stop strategy, and was back into the pits six laps later.

Hamilton was quickly in again on lap 37 from ninth place, switching back to the harder tyres but not taking on enough fuel to get to the end of the race. At the same time Heikki Kovalainen crashed heavily, having made contact with Ralf Schumacher on the first lap, but the accident was once again cleared away without the need for a safety car.

By the time the leaders came to make their final stops their tyres were visibly suffering. Ferrari got Raikkonen ahead of Massa by having him stop later.

Alonso particularly suffered before his pit stops, his lap times up to two seconds slower than the drivers in front of him.

Hamilton’s third and final pit stop left him ninth and looking at a gap of almost 30 seconds to the precious fifth place he needed.

He started his attack by passing Coulthard on his out lap, on his way to a 1’12.506 lap which was the fastest of the race so far. But that wasn’t the kind of pace that the car could sustain on every lap, and as the tyres degraded the prospect of him taking fifth place fell out of reach.

Up ahead of him Nick Heidfeld, Nico Rosberg and Robert Kubica were battling hard for fourth. Rosberg dived past Heidfeld at turn one on lap 60 but the pair ran wide, allowing Kubica past. Rosberg battled on and caught Kubica again, finally passing the Pole for fourth with two laps to go.

Raikkonen was completely serene out front, grabbing fastest lap on the 66th tour. Not worrying about what Hamilton was doing, he breezed around the final laps to win.

When he crossed the line Hamilton was actually two cars behind him, but a lap down in seventh. At that moment, Raikkonen became the 2007 Formula 1 World Champion.

Massa did his duty and finished second with Alonso third. The Spaniard finally tied with his team mate on points, but ends the year third overall.

Rosberg, like Alonso, may have started his last race for his team. The German put in an exceptional performance to take fourth, beating both the BMWs, and allowing Williams to cement their fourth in the constructors’ championship.

Kubica was fifth and Heidfeld sixth, with a disconsolate Hamilton seventh, less than ten seconds away from Kubica. Trulli had gone into the pits late into the race, surrendering seventh to Hamilton, and falling to eighth.

Coulthard finished out of the points in ninth, as did team mate Webber who retired on lap 14. Nakajima, tenth, was lucky to finish after hitting two of his mechanics during a pit stop. Both were injured, though not too seriously, and taken to the medical centre.

Schumacher, Sato, Liuzzi and Davidson were the remaining finishers, the latter surviving an assault by Adrian Sutil who picked up a drive through penalty for the move, before retiring.

Nor did either of the Hondas finish after a rotten year for the team – Barrichello’s engine blowing up spectacularly on the main straight.

Hamilton’s recovery drive was spellbinding and reminiscent of Michael Schumacher’s last year. But the man of the moment is Raikkonen. With 110 points, he wins the title by a single point from two other drivers, having been 26 points behind at one point in the season.

No one can fail to be impressed by either of them. More races like this next year please!

An astonishing twist in the final race, and a brilliant drive by Hamilton.

Update: Following the race the stewards investigated the Williams and BMW cars after it was found their fuel temperatures fell outside of regulations. See here for more: Investigation could jeopardise Raikkonen’s title hopes.