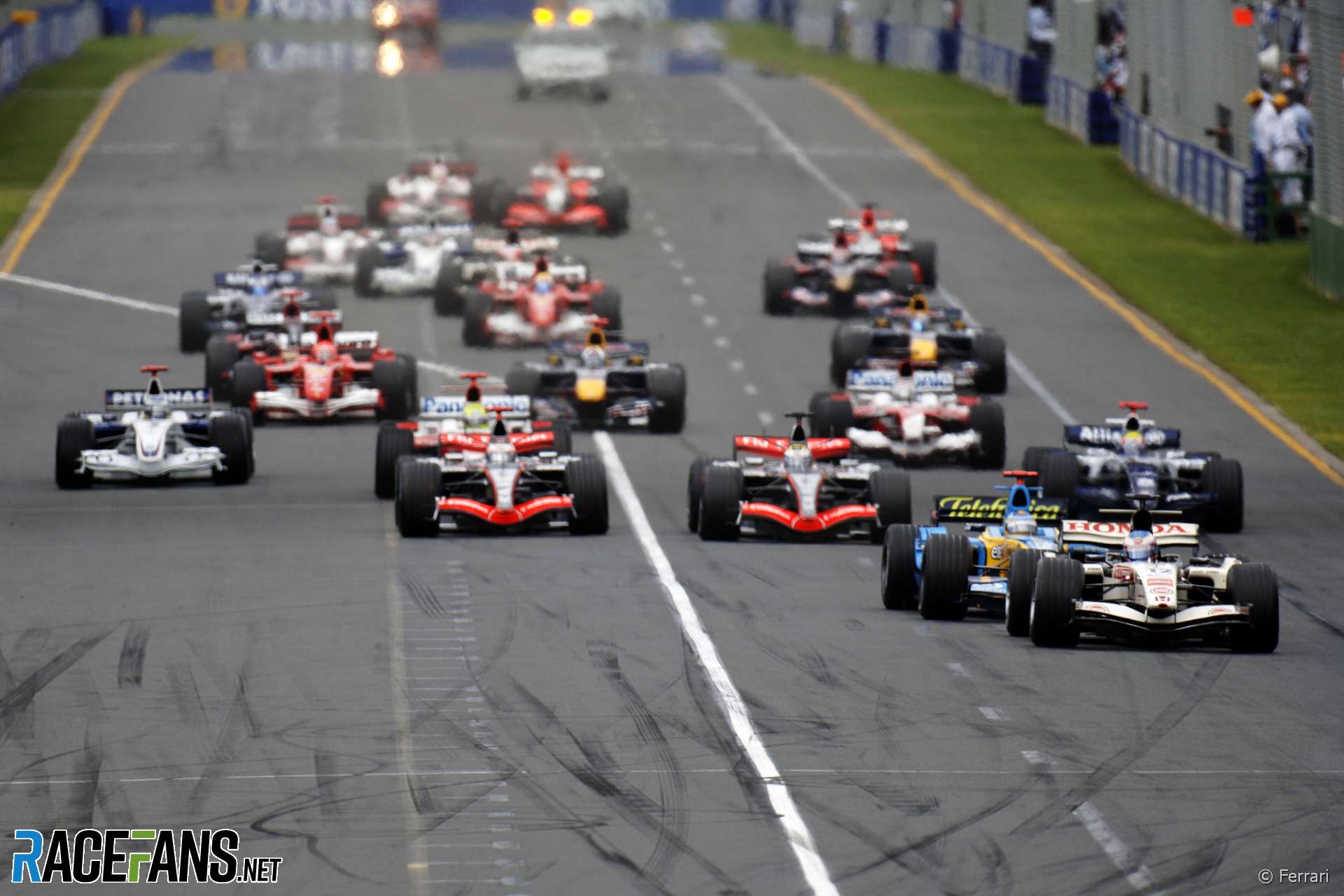 Fernando Alonso stamped his authority all over the Australian Grand Prix – while the field behind him fell by the wayside. Michael Schumacher, Juan Pablo Montoya and Jenson Button were among the casualties.

Button rocketed to pole position on Saturday on a very competitive fuel load, and successfully converted the advantage into the race lead. He was aided in this by Giancarlo Fisichella, who had qualified second but stalled on the grid, forcing a restart.

This handed a get-out-of-jail-free card to Montoya. The McLaren driver had spun on the approach to the grid and would otherwise have been forced to start from the back. It was going to be one of those days.

Alonso chased Button into turn three but the Briton cannily pinned the Renault driver to the outside of the track. The McLaren drivers, as in Malaysia, set upon each other with astonishing ferocity, but kept it clean.

The same could not be said for Felipe Massa, who smacked into the back of Nico Rosberg en route to an appointment with the barrier and early retirement. This also ended Rosberg’s race, and brought out the safety car, which we would all be very familiar with by the end of the day. Also out was Jarno Trulli, who tangled with David Coulthard, but the Scot continued.

On a cold, autumnal day the deficiencies of Button’s Honda in coping with cool conditions were woefully exposed. Alonso mugged him at the restart on lap three and pulled out a 2.7 second lead while Button fended off Raikkonen. Behind them Montoya quickly recovered from sixth to slice past Ralf Schumacher’s Toyota and Mark Webber’s Williams-Cosworth – Webber having already put a fine move on Schumacher himself.

But in no time at all the safety car board was out again – this time for Christian Klien, who appeared to lose control of his Red Bull-Ferrari under braking before making heavy contact with the barriers.

Raikkonen repeated Alonso’s move on Button at the second restart – despite very nearly running out of track at turn one – but it rapidly became clear that he could do nothing about Alonso.

Further back Michael Schumacher was making poor progress from his tenth place starting position. Brimmed up with fuel he fell victim to an inspired and brave pass by Vitantonio Liuzzi in the Toro Rosso-Cosworth. While Schumacher floundered, lapping at 1m 32s, Alonso and Raikkonen were in the 27s.

Fisichella was recovering from his back-of-the-grid start and arrived on Schumacher’s tail just after passing Scott Speed at Ascari. But his progress was stymied by the pit stops.

Montoya was first into the pits on lap 18, followed by Button and Fisichella on the next lap. Although Button got out ahead of Montoya, the Columbian’s hotter rubber allowed him to breeze past the Briton at turn two.

Alonso was in on lap 20, and Raikkonen the next, but Alonso’s advantage was enough to keep him well clear of the Finn. Ralf Schumacher, who pitted on the same lap as Button, was called back in for a penalty for breaking the speed limit.

This left home hero Mark Webber in the lead – and just as we were starting to wonder how much fuel he had in the Williams and how far he could go, the car ground to a halt with apparent mechanical failure. Another double DNF for Williams.

Approaching his late first stop Michael Schumacher began to get on the pace. He pitted on lap 26 with Nick Heidfeld in the BMW and they resumed in sixth and fourth respectively. Heidfeld’s team mate Villeneuve had battled up to seventh and was the only front runner yet to stop.

Schumacher, now the fastest man on the circuit, began to haul in Button – taking seven seconds from Button in the three laps to lap 29. Montoya was doing the same to team mate Raikkonen, the Finn having lost a front wing endplate. Montoya took 3.6s off him from laps 29 to 31.

Montoya looked to have spoiled his run when he ran wide out of the final turn on lap 32. But then Schumacher came around the same corner, ran even wider, hit a bump on the grass and slammed into the barrier opposite the pit lane. This prompted the third appearance of the safety car – driver Bernd Maylander having already led more laps than Jenson Button – and sent most drivers into the pits for their second stops.

McLaren took the questionable decision to replace Raikkonen’s wing, given that Montoya was queued behind waiting for his fuel stop. Given the liberty they were taking with fortune it was not surprising that they ran into difficulty during Raikkonen’s stop, causing even more inconvenience to Montoya.

As the safety car peeled off into the pits Alonso led from Heidfeld but had the luxury of the two lapped Midland-Toyotas between him and the German. Behind them were Raikkonen, Button, Schumacher (Ralf), Montoya and Fisichella.

At the restart Heidfeld was passed by Raikkonen and Schumacher. But the leaders had only managed half a lap before Maylander had to pull his Mercedes out of the pits yet again – Liuzzi having ended his strong run in barriers on the exit of turn two. This caused consternation as some drivers – such as Button – slowed before others, causing dispute over exactly what the running order should be.

At the next restart Alonso still had a handy Midland F1 buffer between himself and Raikkonen. After just one tour, Alonso had a five second advantage, and continued to stretch his lead at about one second per lap.

Montoya was catching Schumacher when, on lap 46, he ran wide at the final corner again. This time the McLaren-Mercedes twitched wildly, the rear light flashed on and off, and the car ground to a halt. A perplexed Montoya climbed from the cockpit and into retirement.

On lap 49 Alonso turned on the speed for a one-off lap at 1m 26.1 – apparently to break Raikkonen’s spirits. It may also have been a message to team mate Fisichella, languishing in sixth behind Button.

Fisichella had already been chided from the pit wall by Alan Permayne for lapping around two seconds slower than Alonso. Now Flavio Briatore dialled into the Italian’s frequency to dish out an ear-bashing and demand that he chase down Button. Which he did – pushing Button every millimetre of the way for the final laps.

The win, unsurprisingly, went to Alonso. The chaos of the race only served to distract from just how much faster he was than the opposition at every point of the race.

But the drama didn’t stop until the very end – thick smoke began to pour from Button’s Honda V8 as he neared the end of the final lap, turning to bright flames as he rounded the last corner. Fisichella nearly spun off on Button’s oil, and as the Briton pulled up just short of the line, car after car streamed past to push him out of every points-paying position.